Former Foreign Minister and UNP parliamentarian Mangala Samaraweera says the impeachment fiasco will give more credence to the war crimes allegations. “The way Police and the Army behaved giving cover and protection to the goon squads who went on the rampage was shocking,” he said, adding that the country would have to face far reaching implications following the impeachment on the Chief Justice. According to Samaraweera, the country is going backwards since the 19th sessions of the UNHRC and it is time for the UNHRC to call the government’s bluff.

Following is the interview: 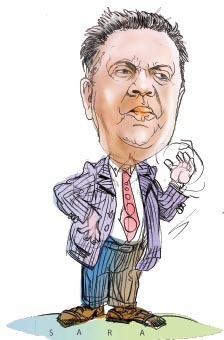 Q: Sri Lanka is once again in the limelight of the international arena following the recent incidents in the country. How do you see this situation?
A: The facade of democracy, which the Rajapaksa regime has tried to maintain over the years, is no more and the true dictatorial and autocratic agenda of the first family has now been exposed. Ever since the Presidential power-grab of September 2010 when the 18th Amendment laid to rest the Independence of the Police, Elections and Public Services Commission, it was very clear to many of us in the Opposition that the President was hell bent on creating a one family rule. The only obstacle to their sinister ambition was an independent judiciary and hence the witch trial against the CJ and the illegal appointment of a bootlicker of proven ability as ‘chief justice.’ At least now, the Sri Lankan public must wake up from their somnambulist slumber and face the truth. We have officially joined the league of pariah nations and Asia’s oldest democracy is now well on the way to becoming a fully-fledged autocracy.

Q: As a former Foreign Minister how do you se the country’s foreign policy? Is it effective to deal with the issues before the international community?
A: Today, the Foreign Ministry is guided by the Medamulana Doctrine of International Relations where you either shoot the messenger or lift your sarong naval high and shout obscenities at any country which dares to ‘meddle in the internal affairs’ of the country. If we are to remain a member of the community of civilised nations, the Foreign Ministry must come to terms with the reality of International Relations of the 21st Century and ensure that we honour our international commitments. The concept of Westphalian Sovereignty is obsolete and no longer valid in the modern world. Westphalian Sovereignty according to International Relations theorists is the concept of nation state sovereignty based on territorial integrity and the principle of non-intervention of one state in the internal affairs of another. However, from the mid 20th Century onwards with the onset of Globalization and Internationalism this concept became increasingly outmoded. Especially today when Democracy, the Rule of Law and Human Rights are accepted as Universal values – not merely Western values – the right of nations to comment or act against another country in specific instances has been recognized through various international agreements. Sri Lanka is also a signatory to many of these agreements. In fact, it was Mahinda Rajapaksa himself who as a Member of Parliament in the late ‘80s and early ‘90s requested the UN and the international community to intervene in Sri Lanka saying in Parliament that in addition to the UN, he is even willing to invite the devil to stop the human rights violations in Sri Lanka! Hansard reports bear testimony to this.

Q: What implications do you think the recent issue of the impeachment of the Chief Justice and issues faced by the judiciary would have on the country?
A: Far reaching implications. Now Sri Lanka is perceived as a country where the rule of law has totally collapsed and as such Foreign Direct Investment would come to a virtual halt. Other than the money laundering ‘round tripping’ investments by those connected with the ruling class, it is now doubtful if any serious and legitimate big time investors would even consider Sri Lanka under these circumstances. Burma, which is now coming out of its dictatorial shell, will be the new destination of choice for many of these investors. In fact, I feel very sad for my long-suffering country. With the defeat of the LTTE in May ‘09, Sri Lanka got an amazing window of opportunity to turn a new page and we could have been what Burma is to the world today. Mahinda too had the opportunity to be the greatest leader Sri Lanka has ever produced. He had the chance of becoming another Dhammasoka but unfortunately for us and for him, the President has chosen Mugabe as his role model. Actually, I feel sorry for my old pal, Mahinda. He has completely lost the plot.

Q: Sri Lanka is already being questioned on human rights violations and alleged war crimes. Given the current situation, can Sri Lanka afford to have more issues added to its list?
A: The impeachment fiasco will give more credence to the war crimes allegations. The way Police and the Army behaved giving cover and protection to the goon squads who went on the rampage was shocking. It proved yet again that the government would violate the human rights of its own people with impunity. The lives of the CJ and her family are under threat and even senior lawyers like Romesh De Silva
and Weliamuna have been threatened and there are credible reports that notorious underworld figures like ‘Dolphin Saman’ have been taken out of jail to carry out some of these threats.

Q: The US backed resolution on Sri Lanka at the 19th UNHRC session last March is to be reviewed this March. Do you think the government has made adequate progress to present at the review?
A: Progress? The country is going backwards since the 19th sessions. It is now time the UNHRC called the government’s bluff. The international community should not be misled by this regime’s duplicitous statements. The government has no political will to implement the LLRC proposals – their own Presidential Commission. Why can’t the regime restore the independent commissions with same indecent haste with which they rushed through the 18th Amendment in Parliament in 2010? Instead of addressing the genuine grievances of the Tamil people, they are even planning to take back even the little powers devolved under the 13th Amendment. Instead of promoting national unity, the government is surreptitiously encouraging Sinhala Buddhist triumphalism. In the North, killings, abductions and arrests are the order of the day while in the rest of the country the Muslim Community has become the latest target of government sponsored goon squads.

Q: Some members of the international community are contemplating on bringing another resolution against Sri Lanka in March. How do you see this development?
A: By our own actions we have opened the floodgates of international scrutiny. When we continuously violate our international commitments, such resolutions are to be expected.

Q: What impact would resolutions adopted at the UNHRC against Sri Lanka have on the country?
A: It will depend on the type of resolution adopted. Obviously, it will tarnish the image of the country in the eyes of the world but it will also have a devastating effect on our economy if trade sanctions are contemplated by our key trading partners in USA and the EU. Already we are feeling the pinch of losing our GSP+ concession. My personal view is that travel bans against the key culprits could be more effective than economic sanctions as a first step.

Q: The holding of the CHOGM summit in Sri Lanka this year has come under severe criticism. Do you think there’s a possibility of moving the summit out of the country? How?
A: As the host of CHOGM and therefore the Chair of the Commonwealth for the next two years Sri Lanka is committed and duty bound more than ever to uphold Commonwealth values and adhere to the Harare Declaration and the Lattimer House Principles. The manner in which the CJ was impeached is a brazen violation of the Commonwealth values and the government has no one else to blame but itself if CHOGM is shifted to another venue. The time has come for the regime to be told in no uncertain terms that it cannot continue to run with the hares and hunt with the hounds.

Q: What actions do you think the government has to take to successfully address the concerns raised by the international community?
A: In order to do so, the government must immediately implement the LLRC proposals and reestablish their democratic credentials. The Chief Justice must also be restored to her legitimate place while guaranteeing the total independence of the judiciary. The government must learn to walk the talk and many of these proposals can be implemented in a short period of time. Having said that I don’t believe that this regime has the political will to implement these much needed political reforms. Therefore the only hope for democracy in Sri Lanka is regime change. Sooner the better.