Stating that the genocide-accused Mahinda Rajapaksa “has banished terrorism from his country and ushered in a new period of prosperity”, Alistair Burt, British Under Secretary of State at the FCO, advised Colombo to learn from the British experience in Northern Ireland and to implement the LLRC recommendations, in an article written for the Canadian news agency The Globe and Mail, on Friday. Mr. Burt was making these comments after a tour of the militarily occupied Tamil homeland earlier this month, which was criticized by civil society activists in the North as a “war picnic”. Grassroots Eezham Tamil activists in the UK came down on the Conservative minister’s article, alleging that it was lending legitimacy to the genocidal Sri Lankan state. 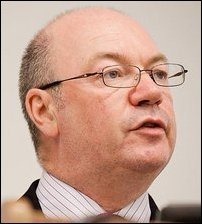 The British FCO state minister Alistair Burt’s open defence of international State terrorism of the Establishments, the silent response to it coming from the British Labour opposition having people like David Miliband who were in complicity to the genocidal war in the island and the lack of uprising among the 300,000-strong Eezham Tamil diaspora in the UK against the theoretical comparison of Northern Ireland of the unitary UK with the unitary Sri Lanka, do not augur well to the future of Eezham Tamils in particular and the future of humanity in general, commented political observers in the Tamil diaspora.

Alistair Burt’s statements have to be understood in South Asia, especially in Tamil Nadu, in the long background of British colonial history in the region. The Eezham Tamil diaspora in the UK has a historic responsibility in taking the initiative in inspiring and directing the struggle of the masses in Tamil Nadu by what it could first demonstrate in Britain, the political observers said.

Without preparing and coordinating with the masses in South Asia, especially in Tamil Nadu, the concerted onslaught of the rump of British colonialism in collaboration with the US imperialism in the southern tip of South Asia cannot be faced effectively. Alistair Burt’s statements have to be comprehended in combination with the Conservative Canadian minister Jason Kenney’s stand on Eezham Tamils after his visit to Colombo and the Australian Conservative Deputy Leader of Opposition Ms Julie Bishop lying on the conditions of Eezham Tamils after her visit to the island, the political observers cited.

The so-called ‘liberal democratic’ hoodwink of London Kandaiahs [a phrase that comes from a famous play of the 1960s staged in Jaffna], hooked to different political parties in the UK and sitting on any mass uprising, is ineffective to the current context and this should be realized by the Tamil diaspora in Canada, Australia and New Zealand as well, the political observers commented further.

“When the Liberation Tigers of Tamil Eelam met their demise in 2009 at the hands of the Sri Lankan army, no right minded person mourned their fall. Before the war, the Tigers ruled the Tamils of the north and east of the island with an iron fist and brutally murdered countless civilians,” Mr. Burt wrote in his article.

Adding that Mahinda defeated “a truly reprehensible terrorist organizations with great severity”, he stated that the British government supported an investigation of crimes of both sides.

Referring to military presence in the north and lamenting that not enough was being done for a political solution for “all Sri Lankans”, he continued to offer friendly advice to Colombo to learn from the experience of UK in dealing with Northern Ireland.

“Britain is a friend of Sri Lanka; a friendship based on history, cultural links and common institutions. And as a friend of Sri Lanka, it should be no surprise that we don’t want them to repeat our mistakes. President Rajapaksa has banished terrorism from his country and ushered in a new period of prosperity. It is now time for the political leadership needed to heal the wounds, which caused the war. An important first step would be implementing the recommendations of Sri Lanka’s own Lessons Learned and Reconciliation Commission,” he wrote.

Criticizing Mr. Burt’s approval of the LLRC, Nad Mylvaganam, British Tamils forum’s Parliamentary Coordinator, speaking to TamilNet said “The LLRC’s fundamental and well-documented flaws preclude its position as the authoritative institution regarding accountability in Sri Lanka,” adding that the BTF is continuously calling for an international Independent Investigation into allegations of crimes against humanity and genocide committed by the Sri Lankan state.

Referring to Mr. Burt’s praise for the Sri Lankan government’s progress, Mr. Mylvaganam said “Minister Burt keeps using the phrase ‘end of conflict’ (Globe and Mail, 15 February 2013), as he said in his interview with High Commissioner Rankin on his recent visit to Sri Lanka. He needs to understand that the conflict started long before the armed struggle emerged as the result of the conflict. The end of the war is not the end of the conflict.”

Responding to this article, Sasithar Maheswaran, grassroots activist with the TCC-UK, took on Burt’s observation that many “Sri Lankans” fear that their “independent judiciary and proud tradition of vibrant democracy and activist journalism are being eroded”.

Speaking to TamilNet, the Eezham Tamil youth activist said “The Sinhala judiciary and the Sinhala unitary constitution laid the legal framework for the protracted genocide of the Eezham Tamils ever since the British handed over political power in the island to the Sinhalese. Successive governments have systematically and brutally targeted any vibrant democratic protest of the Tamils and have murdered Tamil activist-journalists with impunity as it is necessary for their genocidal agenda.”

Stating that the North Ireland analogy was completely wrong, Mr. Maheswaran added that the British minister drawing an analogy with Northern Ireland might be intended at taking the sting out of the genocide allegations that are being placed by many on the Sri Lankan state.

Likewise, a veteran Eezham Tamil activist in the UK questioned whether Burt’s observations was Britain’s vision for Sinhala hegemony over the entire island, arguing that Mr. Burt criticizing this or that administrative flaw of the Sri Lankan state without addressing the chronic question of genocide of the Tamil nation in the island, while painting the Tamil liberation struggle as a “terrorist movement”, was only a good cover to give legitimacy to the genocidal Sri Lankan state.

Wondering what effect years of lobbying has had on those in the Establishments he added “The sentiments of more near 300,000 Tamils in the UK seem to mean nothing to the Conservative minister. If the current UK government is not forthcoming in at least taking action against Sri Lanka at the level of Commonwealth, then the UK Tamils will have to reevaluate their faith in the international community.”