While former British Foreign Secretary, David Miliband, in a video message to the 22nd Sessions of the UN Human Rights Council (UNHRC), called for a shift in venue for the Commonwealth Head of Governments Meeting (CHOGM) now scheduled to be held in Sri Lanka this November, the Bar Human Rights Committee of England and Wales (BHRC) and the eminent human rights lawyer, Geoffrey Robertson QC, released a report criticizing the impeachment of Sri Lanka’s Chief Justice, called for the suspension of Sri Lanka from the Commonwealth, and urged the Queen not to attend the November Heads of Government meeting if held in Sri Lanka.

“Given the blatant breach of the rule of law, for which the government purports to stand it would make a mockery of the Commonwealth as an organisation if it permits the Rajapaske government to showcase its destruction of judicial independence by presiding over CHOGM,” Robertson said in his report prepared for the BHRC. 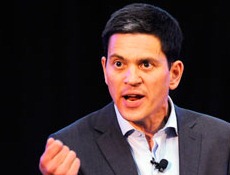 Miliband said in his video message, “Now is the time for international bodies such as the UN and the Commonwealth to demonstrate their relevance by promoting and upholding core values of democracy, the rule of law and human rights. Therefore, I support further action on Sri Lanka at the Geneva session and urge the UK and all Commonwealth members to call for a change of venue for 2013 CHOGM, so that the principles of these institutions are not undermined," according to UN media reports.

Robertson also recommended that the 117 MPs who signed the motion to impeachment Sri Lanka’s Chief Justice Bandaranaike, and the 7 government ministers who convicted her, should all be subject to international measures now available for use against human rights violators, called the “Magnitsky Act”.

“the Magnitsky Act is a new tool to name, shame and actually punish those human rights violators who fall within the class of “train drivers to Auschwitz” – they do not order an atrocity, but it would not have happened without their help. These 117 tame MPs started the impeachment process by making false accusations against the Chief Justice. Some are likely to want to visit the UK, other have funds in UK banks. All democracies should act to protect judicial independence as a core value, and there should be a stigma attached to those that have destroyed it in Sri Lanka.”

In February, Human Rights Watch (HRW), a US-based rights organization, also called on the Commonwealth to shift the venue of CHOGM from Sri Lanka.

Geoffrey Robertson QC was the First President of the UN Court in Sierra Leone and a ‘distinguished jurist’ member of the UN Internal Justice Council which disciplines UN judges.

BHRC is an independent body concerned with protecting the rights of advocates, judges and human rights defenders around the world. The Committee is concerned with defending the rule of law and internationally recognised legal standards relating to human rights and the right to a fair trial.