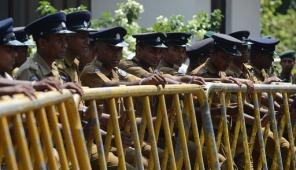 Sri Lankan police blocked hundreds of minority Tamils from attending a rally in the capital Wednesday to protest extrajudicial killings and the disappearances of their loved ones, an activist said.

Buses packed with family members were prevented from leaving the northern town of Vavuniya to make a 260-kilometre (162-mile) journey to Colombo for the Wednesday morning rally, activist and politician Mano Ganeshan said.

"The protest was called off because nearly 1,000 people were not allowed to proceed from Vavuniya," Ganeshan told AFP. "Armed police and army intimidated bus drivers and threatened them with dire consequences if they moved."

Military spokesman brigadier Ruwan Wanigasooriya denied intimidation, but said police had "advised" bus operators against leaving in the interest of maintaining peace and calm in the area.

The latest confrontation between Tamils and the authorities came as Sri Lanka faces censure at the ongoing UN Human Rights Council in Geneva where the US is due to move a resolution pressing for a war crimes investigation in Sri Lanka.

Rights groups have said that up to 40,000 were killed in the final months of fighting in Sri Lanka while Colombo maintains that not a single civilian was killed by security forces.