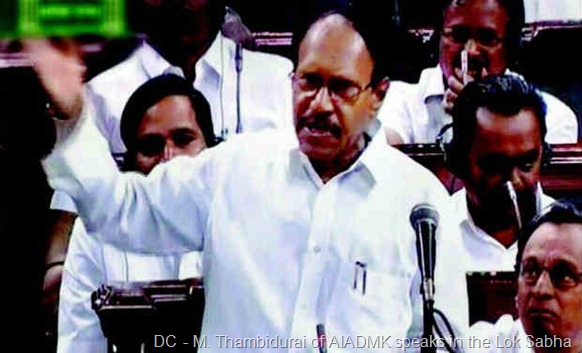 Angry at the external affairs minister Salman Khurshid’s refusal to commit India to vote in favour of the US sponsored resol­ut­­ion against Lanka at the UNHRC in Geneva on March 22, the oppositi­on BJP, JD(U), the DMK and the AIADMK staged a wa­lk out from the Lok Sabha.

Participating in a discussion on the plight of Sri Lankan Tamils under rule 193, which does not entail voting, speaker after speaker pressed India to take a decisive stand aga­inst the Island nat­ion. But Khurshid while res­pondi­ng to the demand restri­cted himself to saying that India would take the “best possible” decision. He also promised to factor in the sentiments and anguish expressed by members while deciding which way to vote at the UNHRC.

Treading a cautious path he said, “When the resolut­ion comes, we will take in­to account what all memb­ers said, study what has ha­ppened on the ground, lo­ok at what Lanka has to say, what other countries h­ave to say and then take best possible decision.”  As repeated demands to clearly spell out India’s stand did not elicit a response, T. R. Baalu (DMK) led the walk out of his party to be followed by the AIADMK and later the BJP and the JD(U) too followed suit.

‘SL army should be in barracks’

External affairs minister Salman Khurshid said he favoured diplomacy over war. Speaking in the Lok Sabha on the discussion over Sri Lanka and the forthcoming meeting of the UNHRC in Geneva on March 22, Khurshid said that anything that we do today should not be thro­wn at us later.

He said, “What we do should not be thrown back at us in the future as everybody is not our friend.” He added, “We don’t play the policeman of the world or the big brother in any country.”

The foreign minister also conveyed the mess­a­ge to Sri Lanka that the old wounds can  be he­a­l­ed if only Tamils are all­owed to live with dignity and comfort. He said, “Th­ere has to be an acce­ptance of truth and reconciliation” and Tamils are given dignity, comfort and participation in the country’s affairs.”

Earlier, the main opposition BJP demanded that the government sho­uld take the lead in drafting the UNHRC resolution on Sri Lanka, which comes up for a vote soon. Attacking the government, former extern­al affairs minister Yash­w­a­nt Sinha, said, “Fore­ign policy is not conducted out of fear but with confidence and elan,” adding that India has a lot of clout but seems to have lost momentum.

He also said that India should urge the Lankan government to withdraw its army from the  Tamil-dominated northern pro­v­ince.  Noting that the conflict in Lanka ended four years  ago, Mr Sinha said the normal law and order duties should have been assigned to the po­l­i­ce by now.

“Let the army of Sri Lanka go back to the barracks. Let them not run the northern province on a daily basis….,” he stated.

In his speech, Sinha while taking note of the massacre of the Tamil population in Sri  Lanka and the atrocities committed on them made suggestions on which he said the  government should take action.

Alleging that Sri Lankan police had prevented hundreds of Tamil protesters from leaving nor­thern Vavuniya town to take part in a rally at Co­l­ombo, DMK president M. Karunanidhi on Thu­r­sday said that such ‘au­tocratic’ activities by the island government were condemnable.

In a statement, Kar­u­nanidhi quoted the US Embassy in Sri Lanka that had asked Colombo to allow free movement of citizens as saying, “Th­ese family members are calling for information about their missing loved ones. The Embassy calls upon Lankan auth­o­r­ities to allow free mo­ve­ment of these citizens.