In a demonstration held in Auckland in New Zealand on Wednesday, the demonstrators profusely thanked the students of Tamils Nadu for internationally highlighting the genocide issue of Eezham Tamils at a most wanted time and for taking the issue beyond the party politics of India in convincing the world that creation of Tamil Eelam is the only solution. “Our struggle begins here and a hard road is ahead,” said one of the speakers at the demonstration, participated by professionals, university students and even housewives. New Zealand Tamils were one of the first to openly caution the entire diaspora last month itself on the dangers portended by the ‘doing nothing’ approach of the USA towards the question of Eezham Tamils.

The way the New Zealand speakers identified the phase of struggle as something new now, indirectly implies the awakening of the diaspora about the ultimate forces that waged and continue to wage the real war against the cause of Eezham Tamils, why they wage the war and the futility of the line of struggle hitherto adopted by the articulating activists among the Eezham Tamil diaspora since May 2009 by looking upon the ultimate culprits themselves to deliver justice, commented alternative political activists in the island.

However, as thanking the Tamil Nadu students itself has been now adopted as a tactic by habitual hijackers articulating at the behest of the ultimate culprits who try to keep the Eezham Tamil polity gagged in their backyards, those in the diaspora who have now realised the realities should get the inspiration from the students of Tamil Nadu on how to wage the struggle beyond the influences of Washington and New Delhi too, as the students in Tamil Nadu have waged the struggle beyond party politics, the activists in the island further commented.

Speaking at the demonstration, Mr A Theva Rajan, coordinator of the Tamil Action Front of New Zealand said that the struggle ahead is long and is bound to be complicated. But the struggle will have to continue and it is in our hands – more so in the hands of the Tamil youth in the diaspora.

“What happened in May 2009 in Vanni is unalloyed Genocide. We are thankful to the students of Tamil Nadu for having isolated the Eezham Tamil issue from the politicians of India and made it a humanitarian issue pitted against structural genocide of the Sri Lankan Government. Our concern should be how the dictator Rajapakse can be prevented from completing the genocide. Our struggle begins here and is a hard road ahead,” said Mr Prem Kumar a Tamil activist addressing the gathering in Auckland on the eve of the final sessions of the Geneva summit.

Mr Gajalakshan, a Tamil youth activist addressing the Auckland demonstration in support of the Tamil cause being debated in Geneva said: “We take this opportunity to express our gratitude to the students of Tamil Nadu for taking the genocide of Tamils in the island of Sri Lanka out of the Indian main stream politics and highlighting the gravity of the issue and for canvassing support for the one and only solution of the creation of Tamil Eelam.”

Another Tamil youth activist Mr Kumaran while we appreciating the support given by the students of Tamil Nadu in carrying forward and explaining the justification of the Eelam struggle to the people of Tamil Nadu and beyond, expressed his sadness over the instances of self immolation, requesting not to take such steps as such protests are not positive or constructive.

Youth activist Mr Pratheep said: “We are very happy that the Students of Tamil Nadu and even other States have realized the urgency and reason behind the Tamil demand for Tamil Eelam as the only way out for survival. We salute them for carrying forward the reason behind our struggle divorcing it from Party politics.

Mr Ashok, the Co-ordinator of New Zealand Tamil Youth Organisation (TYO), calling for Tamils to be prepared for the struggle in the times to come, said that this is the beginning of a struggle that needs intensification to achieve the final goal, the establishment of Tamil Eelam. 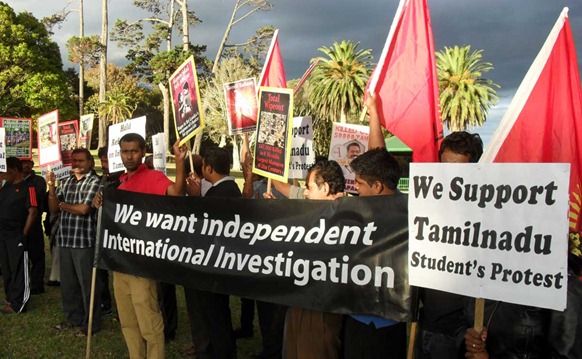