Aiming to alienate lands from the people of North and East and to enable the colonial governors and SL government agents to abet an accelerated land appropriation, circumventing even the legal challenges posed by Tamil activists and NGOs, the Sri Lankan Minister of Lands and Land Development, Janaka Bandara Tennakoon, has set forth parameters for a land programme with the participation of the Sri Lankan military in the North this month. But, the projection given to the world during the Geneva session was that the SL State was establishing two offices in Jaffna and Ki’linochchi, to hand over thousands of acres of lands back to civilians. When questioned where these lands are situated and under which GS areas they come in, the minister or the military commander had no specific answer to provide, news sources in Ki’linochchi and Jaffna said. 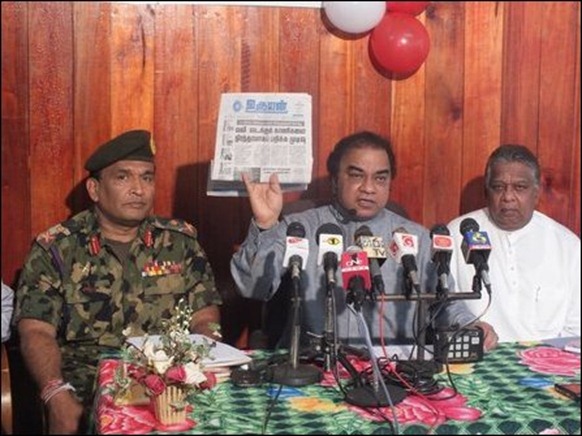 SL minister Tennakoon who has been advisor to SL president Mahinda Rajapaksa on land issues assailed media operating from Jaffna as waging propaganda against his policies. The paper at his hands reads “lands in Valikaamam North are to be permanently appropriated”.

SL Minister of Lands and Land Development Janaka Bandara Tennakoon, together with SL military commander in Jaffna Mahinda Hathurusinghe, declared opened a land office for Jaffna on 11 March. The next day, the SL minister, together with SL military officials and EPDP operative Chandrakumar, declared open another land office for Ki’linochchi. The SL State was engaged in a propaganda stating that the land offices were being opened according to the LLRC recommendations to resolve land disputes.

The offices will be functioning under the SL military agenda of converting former High Security Zones into Sinhala Military Zones.

Further, the offices established in Jaffna and Ki’linochchi will be categorising everything that comes under military occupation as ‘lost lands’, an ambiguous term introduced in the recent Land Circular issued in January this year.

This justifies the occupation of strategic lands under the tag of ‘development activities’ initiated by the occupying SL State, Tamil legal activists say.

Most of the so-called ‘development activities’ are carried out by the occupying Sri Lankan military forces.

The visiting SL minister was telling those present at the event that his ministry had acquired 5,000 acres from the SL military for distribution back to civilians adding that he was functioning as advisor to SL president on land issues since 2010.

However, when reporters questioned where these lands, which both the SL minister and the SL military commander were talking about are located, they had no answer. They also skipped to respond to the question on when they would commence the act of returning the lands.

While they were talking about handing over lands to civilians, the SL military on the ground had just completed fencing 24 village divisions in Valikaamam North.

The SL minister was particular in attacking the media operating from the peninsula. He also attacked TNA parliamentarians for filing lawsuits against the SL State.

Informed sources said the new office in Jaffna was aiming to legally appropriate the lands for the Sinhala Military Zones.

State lands for ‘development’ activities would be identified in all the 72 divisions in North and East, Tennakoon claimed. 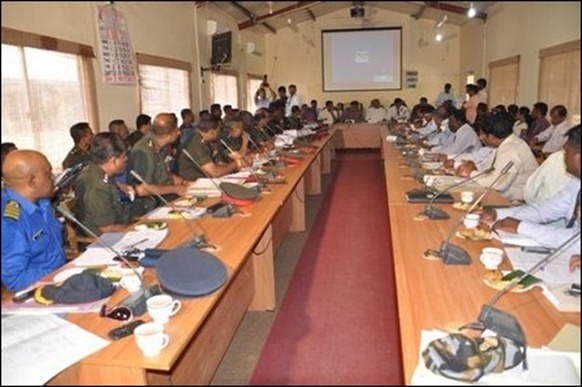 In the meantime, almost all the Divisional Secretaries in Jaffna are under direct pressure from the occupying Governor and SL military officials to take immediate action to legally appropriate lands from the owners for the already established SL military cantonments.

400 million rupees have been allocated for the Jaffna and Ki’linochchi land offices that have been opened for the purpose of land appropriation under the propaganda slogan of resolving land issues for the resettling people.

A similar Land Circular, issued in July 2011, evoked public outrage and was withdrawn in January 2012, after it was legally challenged.

But, the LLRC report, issued in November 2011, was welcoming the Circular and was appreciative of the inclusion of occupying SL military officials in the committees dealing with the land issue in North and East.

Meanwhile, the owners of the lands, having original documents, were often confronted by the question of authenticity of their documents, by the colonial agents of the SL State.

The SL State policy also attempts to classify certain lands as lands allocated under ‘terrorist influence’ and de-legitimise the lands that had been distributed to people under poverty line by the positive policies adopted under the de-facto administration of Eezham Tamils.

In sharp violation of the territorial customary Law (Theasvazhamai / Thesawalamai) of the people in the North, the LLRC attempts to justify the claim that “any citizen of Sri Lanka has the inalienable right to acquire land in any part of the country”. The opposition UNP parliamentarians have also gone on record defending this position.

The SL government’s so-called land policy document, released in July 2011, titled ‘Regulating the Activities Regarding Management of Lands in the Northern and Eastern Provinces.’ Following this policy document, a Land Circular (No 2011/04) was issued.

A public notice by the SL government, following this Circular, demanded the people to register their lands before 20 November 2011, sending shockwaves to Eezham Tamils across the world.

The 2011 Circular was withdrawn in January 2012, following legal challenge initiated by the Tamil National Alliance.

The latest Circular (2013/01) is just the same policy in new wrapping with ambiguous terms. It deals with private lands while claiming that the policy is about State lands. The latest policy also attempts to deploy other ‘provisions’ in the law of the occupying Sri Lanka to appropriate lands.

As for all practical purposes, the State being a Sinhala State and its military being a Sinhala military, the talk of ‘State land’ means ‘Sinhala land’, Tamil activists Jaffna said.

This kind of assertion of ‘State’ in the island that has explicit genocidal connotations is internationally endorsed by the USA and India that encourage legalisation of genocide in the island, for them to ultimately appropriate the entire island, the activists said.

The British colonialism used terms such as ‘Crown Land’ and ‘Crown Colony’, the activists further said.