Tamils should be wary of the intentions of the Western Establishments that are pricking Sri Lanka with this or that war crimes evidence released year after year. They hold possession of a lot more hard evidence of Sri Lankan atrocities, but still do not address the question of genocide of the Eezham Tamil nation, opines N. Malathy, arguing that, “the best option for the Tamils world all over is to use the insights they have gained in recent years and refuse to be taken into the Western fold. Tamils should firmly stand their ground about the genocide of Eelam Tamils and the necessity of the creation of independent Tamil Eelam.” In an article to TamilNet, Dr. Malathy, a key member of the NESoHR and the author of ‘A Fleeting Moment in my County’, gives a concise outline of how the West was playing the human rights card to bring both Sri Lanka and the Eezham Tamils into its fold.

Dr. Malathy, noting that the West is currently trying to integrate Sri Lanka as a whole into its sphere of influence, writes further that the West also tries to accommodate the Tamils “with the aim of wiping out the insights Tamils gained during earlier phases of their struggle through direct experience,” referring to the insights gained by the Eezham Tamils on the negative role the West played in creating the current plight of the Tamils.

Similar concerns were addressed in her book ‘A Fleeting Moment in my Country’, which besides being a testimonial to the practical functioning of the earned sovereignty of Pirapaharan’s LTTE, has also noted the role that the organizations of the Establishments had played in tilting the balance in favour of the genocidal Sri Lankan state.

Dr. Malathy stayed in Vanni for 4 years working with civilian institutions like NESoHR and many other women and child organizations. She survived the genocidal onslaught in Vanni and spent over 4 gruelling months in the Manik farm detention camp. The insight coming from the rights activist addresses to the edification of Eezham Tamil diaspora activists. 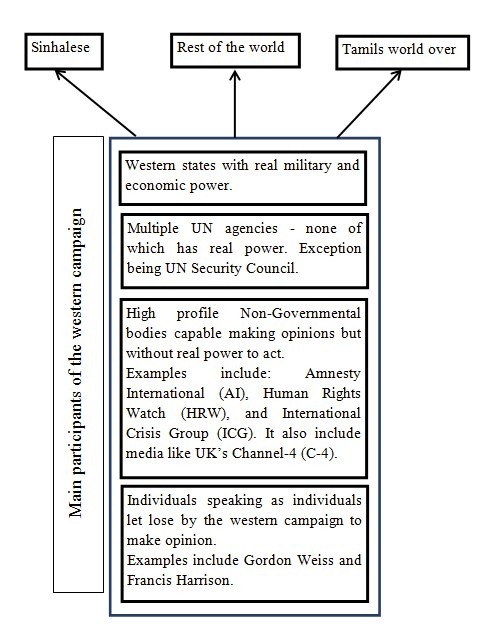 Making sense of the western campaign against Sri Lanka

Tamils in general are heartened by the western campaign that recognizes the plight of Tamils in the post-LTTE era. A minority among these Tamils postulate that the western campaign is aimed only at converting the Sri Lankan regime to be pliable towards western interests. They say that civil rights gains Tamils may make will be negligible. Another section among the Tamils believes that Tamils could gain their rights by offering themselves as the West friendly community in the island while the Sinhala regime moves away from the West.

The various reports, statements, books, articles, interviews, and documentaries that have come out as part of this western campaign since 2009 have some prominent common threads: focus on the war crimes violations from Jan 2009 to May 2009; refusal to use the word Genocide of Tamils; refusal to include the six decades long atrocities against Tamils; hardly ever mentioning the Tamil rights to independence; insistence on always negatively painting the LTTE; and minimal disagreement among the western campaigners about this subject.

For the purpose of studying this campaign, the body of campaigners involved can be categorised as consisting of layers (see figure). At the bottom layer are the individual campaigners who do not represent any institution. They can put forward the most serious allegations without any need to act on it. At the next level are non-state institutions such as Amnesty International (AI), Human Rights Watch (HRW), International Crisis Group (ICG) and even media like UK’s Channel-4 (C-4).

These non-state groups can also carry out the campaign with very little obligations to act further. The next layer consists of UN agencies whose statements and resolutions carry more weight. But each UN agency can behave as if it lacks power to act. Final layer is made up of the western states who hold the real economic and military power.

If one observes the format used by the campaigners as whole it is clear that the allegations against Sri Lanka increases in pitch that is proportional to how far down the layers they come from. Readers can test the validity of the above claim by taking any material that have came out as part of this western campaign. This layered view is therefore a valuable tool to interpret the western campaign.

A prominent feature of this incessant western campaign against Sri Lanka since the demise of the LTTE is the gradually increasing seriousness of its allegations. In order to give the reader the sense of the progression of this campaign a description of the major milestones of this campaign are given below.

2009: The campaign started in August 2009 with the execution video of blind folded Tamil men being shot at close range. Much was made out of this video despite 300,000 eyewitnesses of worse crimes continued to be imprisoned in the Manik farm camp supported by the UN which had access to the 300,000 detained there.

2010: There was silence from the western campaigners except for occasional allegations of war crimes and the need to investigate the war crimes. Then in March 2011 came the UN Panel report after much debate on whether it was going to be made public. It did not add much and what it said was a drop in the ocean. Gordon Weiss released his book in May 2011 with much media attention without adding much more except that UN stopped publishing the casualty numbers earlier which if done might have stopped the carnage. Then came the media sensation in the form of Channel-4’s first of the series of video evidence in June 2011. Francis Harrison who was working on her book was given publicity by chairing the release of Norway’s report “Pawn of Peace” in September 2011.

2012: Just prior to the March 2012 UN Human Rights Council meeting in which USA sponsored a resolution on Sri Lanka, Channel-4’s aired the second in its series “War Crimes Unpunished”. This was immediately followed by a “leaked” cluster bomb evidence in April 2012. Francis Harrison’s book followed in October 2012 and she toured the world promoting her book as part of the campaign.

2013: Timing with the March 2013 UN Human Rights Council meeting came the HRW report in February on Rape in custody. This was followed by another Channel-4 media sensation of releasing 12 year old Balachandran’s photo. Then Francis Harrison wrote an article about her interviewing eye-witnesses to the “white-flag” incident.

It is certain that the West is in possession of a lot more hard evidence, including satellite images, of atrocities by Sri Lanka. Based on the progression of the post-2009 allegations produced by the western campaigners, one can assume that the West is capable of taking the pitch of the allegations to even higher level. What will make the intensity of the allegations against Sri Lanka go to a higher and higher pitch and what will make the allegations to be gradually toned down? In order to study this, the target of this layered campaign can be viewed as three distinct groups: the Sinhala people and the Sinhala regime, Tamil people and a potential Tamil regime, and the rest of the world.

The Sinhala people are targeted with the view to make the Sri Lankan regime pliable to western interest. When targeting this audience the war crimes and other crimes allegations are meant to scare the target. At the same time this target is also enticed by actions like accepting alleged Sri Lankan war criminals as diplomats. The Tamils who are fully drawn into this western campaign swing between euphoria and despair as the campaigners alternately implement this carrot and stick style campaign.

The next target is the Tamil target and they also need to be made pliable towards the West. Tamils have been sensitized to the role of the West in creating the current plight of the Eelam Tamils. These Tamils are living in a unique juncture of their history. They have gained an insight about the negative role played by the West in their struggle. This kind of opportunity to gain insight about the role of the West is not available to all of humanity.

The Western campaign will also take into account the need to draw in the majority of the Tamils into the western fold with the aim of wiping out the insights Tamils gained during earlier phases of their struggle through direct experience. In other words to diminish the insight they have gained about the negative role the West played in creating the current plight of the Tamils.

The last section of the target audience is the rest of the world. This section needs to be prepared for any potential future actions for or against Sri Lanka. The on going campaign is also achieving this aim.

In summary the difficult target audience for the western campaign are the Sinhalese and the Tamils. The rest of the world are easy targets to be swung any which way. If the pliability of the Sri Lankan regime is achieved then the Tamils can be effectively ignored by making superficial adjustments to the Sri Lankan state.

At the other end of the scale if the Sri Lankan regime shows no sign of yielding to western interests or if a large section of the Tamils resists coming into the western fold then the campaign pitch could increase even further.

In conclusion the best option for the Tamils world over is to use the insights they have gained in recent years and refuse to be taken into the western fold. They should firmly stand their ground about the genocide of Eelam Tamils and the necessity of the creation of independent Tamil Eelam. Tamil Nadu student protest timed with the March 2013 UNHRC meeting is a demonstration of this Tamil resolve. These students have also said that there are sinister moves to disturb their uprising.

Therefore, Tamils must remain ever vigilant of the western and perhaps even Indian campaigns which are capable of taking sinister forms to diffuse the Tamil resolve.