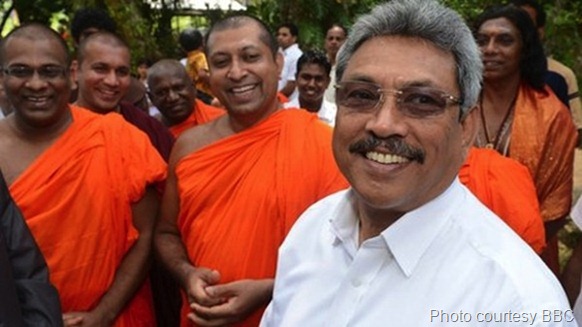 In the few days following the UNHRC meetings in Geneva, we have witnessed several act of blatant criminality by mobs on people and property- in greater Colombo, Killinochchi and elsewhere.

A common factor has been the passivity of the Police. They have looked the other way (reminiscent of July ’83) and suppressed video evidence of the culprits responsible for such violence.

We have also witnessed, in a single day, the Attorney General interfering in court cases involving politicians and their family members.

The justifiable outrage over groups like Bodu Bala Sena  must not distract us from asking fundamental questions such as:

The public must keep raising these questions- in the independent media, schools and universities, civil society associations, and- above all- in Parliament through their elected representatives.

I disagree with most Groundviews commentators who have described these acts of mob violence as manifestations of “religious extremism”. They are more plausibly acts of political manipulation. Those who claim to have liberated Tamils from “terrorism” (a terrorism which they had helped inflame) are now waiting to liberate Muslims, Christians and perhaps Buddhists themselves from the  forces of “religious extremism”. A grateful public will welcome the liberators with open arms.

Petitions to the President to ban BBS and Sinhala Ravaya not only threaten freedom of speech, they further undermine the institutions such as Parliament and the Judiciary which need to be restored to their proper functioning.  All criminal activity, from wherever it stems, has to be summarily punished under due process. That is what the public should be demanding.

The public must also draw the obvious connections between these recent acts of violence and what was debated in Geneva. The rule of law has collapsed in Sri Lanka. So we can never expect any impartial investigation into human rights abuses and war crimes. When even the Chairman of the local Human Rights Commission protests that the UNHRC Resolution violates “national sovereignty”, he shows his ignorance of the idea of human rights. How did such a man ever get into such a position?

Ever since the Nuremberg and Tokyo war crimes trials that followed the Second World War, international law has recognized that the plea “I was just following orders” does not protect policemen, civil servants or soldiers from prosecution. They are culpable, along with those politicians and army commanders who issued the orders.

The public must also draw the obvious connections between recent controversial parliamentary resolutions and the rampant lawlessness witnessed today. All those who supported the 18th Amendment, which handed absolute power into the hands of one man, share in the culpable inaction of the Police and will be judged one day for their folly.

Questions the public must ask in Sri Lanka – Groundviews