The Rajapaksa government received a slap in its face when the Bar Association of Sri Lanka (BASL) invited the impeached Chief Justice Dr. Shirani Bandaranayake for its inauguration ceremony instead of incumbent Chief Justice Mohan Peiris.

Also, ignoring the warning signs sent by the international community that Sri Lanka is now in the agenda of the international community, the short sighted Rajapaksa government is trying to find solace in the fact that Sri Lanka would not be included in the agenda of the Commonwealth Ministerial Action Group (CMAG) meeting to be held end of the month.

With speculation that the head of the Commonwealth, the Queen of England may not attend the Commonwealth Heads of Government Meeting (CHOGM) scheduled to be held in Sri Lanka this November, most countries are likely to send low-level delegations for the Colombo summit. 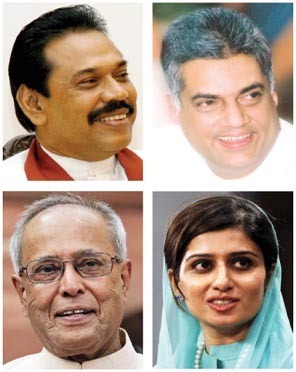 The Rajapaksa government has not yet comprehended the humiliation it would face even if CHOGM is held in Sri Lanka with a poor participation and member states making critical comments on the government’s actions.

The Rajapaksa government’s failure in re-building diplomatic relations with the international community including neighbouring India is likely to boomerang badly in future.

Relations between the Mahinda Rajapaksa government and the Indian government have been under mounting pressure since the adoption of the second US sponsored resolution at the UNHRC sessions in Geneva.

The Indian government that has been engaged in a continuous diplomatic tussle with the Rajapaksa government over issues faced by the Tamil community in the country and post war reconciliation has sent a clear message of its frustration at Colombo’s inaction through its vote at the UNHRC.

India’s sentiments were expressed to Opposition Leader Ranil Wickremesinghe during his visit to India last week.
Indian President Pranab Mukherjee has reportedly said that India has always felt that the end of the conflict in Sri Lanka provides a unique opportunity to pursue lasting political settlement, acceptable to all communities.

Sri Lanka must seize the opportunity for genuine national reconciliation and move ahead, he has told Wickremesinghe during a meeting at the Rashtrapati Bhavan on Wednesday.

The Sunday Leader learns that New Delhi has requested Wickremesinghe to play an active role in Sri Lanka’s activities.
Expressing dissatisfaction at the Rajapaksa government’s actions, Wickremesinghe has been asked to work towards getting all opposition political forces together to defeat the government.

New Delhi has pointed out that a strong opposition force could propel some favourable action in areas like reconciliation and accountability.

Meanwhile, India last week said that it took a risk on the Sri Lankan issue despite pressure from some political parties and interest groups in India.

In an interview with the Indo Asian News Service (IANS), Indian External Affairs Minister Khurshid has said that some groups wanted India to go much further.

“Tamil Nadu assembly has passed a resolution, they wanted us to do the same thing at the UN, but we didn’t do it,” he has said.
The Indian External Affairs Minister has said that India took the risk and took the responsibility of going only as far as they thought was the right thing to do.

He has observed that he feels there is an appreciation in Sri Lanka on the stand India took with regards to the island nation.
India supported a resolution on Sri Lanka at the UN Human Rights Council but refused to accept a resolution adopted by the Tamil Nadu Assembly against Sri Lanka.
However, senior BJP leader Yashwant Sinha has urged Indian Prime Minister Manmohan Singh to skip the Commonwealth Heads of Government Meeting (CHOGM) scheduled to be held in Sri Lanka from November 15 to 17.
Addressing a hall meeting on the Sri Lankan Tamils issue in Chennai, Sinha said India was the pivot of the Commonwealth body. “If

India does not go there, CHOGM cannot be held,” he said.

The Indian media report said that the BJP leader also called for the suspension of Sri Lanka from Commonwealth membership by the Commonwealth Ministerial Action Group for violations of the Harare Declaration.

While relations between India and Sri Lanka have been put to the test by the Rajapaksa government, it has found itself another key regional ally in Pakistan.

Pakistani Foreign Secretary Jalil Abbas Jilani visited Sri Lanka from April 4 to 5 to take part in the third Round of Bilateral Political Consultations between the two countries.

It needs to be noted that the support of Muslim countries received by Sri Lanka at the UNHRC during the US backed resolution at last month’s sessions is mainly due to the campaign launched by Pakistan.

It was Pakistani Foreign Minister Hina Rabbani Khar who directed Pakistan’s envoy at the UNHRC to muster the support against the US backed resolution on Sri Lanka.

However, US relations with Pakistan have been strained since 2011 and are still in the process of being re-built.

Former US ambassador to Pakistan Cameron Munter has been quoted in the media some time back saying that Washington’s “callousness” over the killing of 24 Pakistani troops in a US air strike on a post in November 2011 had strained ties between the two nations.
Strained relations between the US and Pakistan and India’s decision to vote in favour of the resolution resulted in Pakistan pulling support for Sri Lanka at the UNHRC and getting the support of the Muslim countries.

Nevertheless, Pakistan and the other Muslim countries that voted against the resolution have to now reconsider its position given the issues faced by the Muslim community in the country.

The Rajapaksa government’s failure to effectively address the continuing anti-Muslim campaign in the country is now putting pressure on the Muslim countries headed by Pakistan, which are new found allies of the government.

Pakistan is also faced with a dilemma of building its relations with Sri Lanka when Indian relations are pushed aside while also representing the position of the Muslim community in the country.

Soon after the attack on two Muslim business institution, Leader of the SLMC, Justice Minister Rauf Hakeem called on the President to summon an emergency cabinet meeting to discuss the religious extremism that was being carried out in the country and the campaign against the Muslim community.

The President however did not heed this request and refrained from summoning a Cabinet meeting to discuss the issue.
It is Hakeem, who is now faced with the most difficult task of saving face before the Muslim community in the country.
His recent statement to a media institution did not help his current position in the government as well.

Hakeem has reportedly told the BBC’s Tamil Service that he had repeatedly requested President Rajapaksa to prevent the Defence Secretary from attending the opening of an institution funded by the Bodu Bala Sena in Galle last month.

The presence of the senior Defence Ministry official at the Bodu Bala Sena function in Galle was an indication of the scant disregard shown to Hakeem and company of the SLMC.

The Rajapaksa government has snubbed the SLMC that joined the government along with eight seats to support the 18th amendment to the Constitution time and again.

The SLMC is fast losing face amongst its community and no amount of lip service would help the party since the Muslim community continues to move away from the party.

Apart from the SLMC, even the senior Muslim leaders in the SLFP have been unable to stand by their brethren.

According to some senior SLFP sources, the Muslim political leadership in the SLFP are purposely distancing themselves from the entire issue of religious extremism for several reasons – the government headed by Rajapaksa is unlikely to allow the Muslim political leaders to try and provide justice to the Muslim community and the issue of growing religious extremism in the country that is a ticking time bomb waiting to explode.

In a similar manner, the crisis in the SLFP is also a ticking bomb waiting to explode.

The Blue Wave campaign launched by SLFP National Organizer and Economic Development Minister Basil Rajapaksa as reported in this column last week has managed to intensify the internal crisis in the party.

The party that is operating under three factions is faced with a new problem due to the appointment of SLFP representatives at grama seva divisional levels. These representatives are appointed by Basil and are answerable only to him or his office. Even the chief organizer of an electorate cannot question them. The situation has further irked the senior SLFPers who have been sidelined and in some instances even forced to share their electorates with Rajapaksa acolytes.

However, the disgruntled SLFP old guard is therefore getting closer to former President Chandrika Bandaranaike Kumaratunge.
Kumaratunge’s recent actions including her participation in several key events like the inauguration ceremony of the BASL and several events in the out-stations like Kurunegala and Embilipitiya have also made the Rajapaksas quite uncomfortable.

Speculation that Kumaratunge was likely to re-enter politics with the support of a large number of SLFPers resulted in the launching of the Blue Wave.