"When our Muslim brothers and sisters are harmed on the street; or attacked by mobs; or have their Mosques vandalized; we cannot be unconcerned spectators,” declared Mr.R.Sampanthan, leader of the Tamil National Alliance and the Trincomalee district parliamentarian while making a statement in the parliament on Tuesday afternoon. The Muslim people have been historical inhabitants of this island. The bonds of a common language and home that hold us together cannot be broken easily, Sampanthan further said in voicing for the plight of Muslims who are predominantly Tamil-speaking in the island. 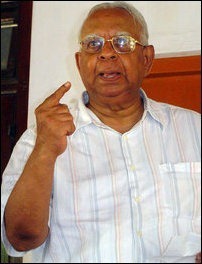 Standing Order 23(2) – proviso: Notice of question relating to matter of urgent public importance – to be made on 9th April 2013

I wish to make a statement on a most grave issue of national concern, relating to the safety, security and wellbeing of the Muslim people of this island. The Muslim people have been historical inhabitants of this island, and have contributed immensely to its development for many centuries. They have their own unique customs and traditions; food and dress; and are devout adherents of a very great religion. As the cultural beneficiaries of the Islamic Golden Age which spanned the 8th to the 13th centuries, the Muslim people of Sri Lanka have scaled the heights of the whole range of human endeavour – from art and music, to medicine and law, and science, enterprise, academics and so on.

Today however, the purveyors of hate are unleashing a bitter and spiteful campaign against the Muslim people. I do not need to recount the many acts of mob violence that have taken place in the last few months. Muslim women who choose to wear conservative religious dress have been molested and abused by strangers in broad daylight.

Today the Muslim people are fearful; anxious and hurt by the invective surrounding them. As fellow minorities, the Tamil people feel the pain, the insecurity, the fear and the anxiety of our Muslim brothers and sisters. The relationship between the Tamils and Muslims has always been close – though sometimes strained and to our perpetual shame, though very rarely, even violent and cruel – but nevertheless always close. It must be emphasized that these extremely unfortunate events occurred only during a certain stage of the time of the armed conflict and will not recurr.

Our people are too closely intertwined for one to think that it can survive the fate of the other. We are connected to each other just as we are connected to the Sinhalese, the Malays and the Burghers; but the bonds of a common language and home that hold us together cannot be broken easily. And so, when our Muslim brothers and sisters are harmed on the street; or attacked by mobs; or have their Mosques vandalized; we cannot be unconcerned spectators.

We are conscious that the vast majority of the Sinhalese Buddhist people do not condone such actions and that they would very much wish to live in peace and harmony paying due respect to the rights of other Peoples. As victims of the worst atrocities, we the Tamils have demanded that the country and the world heed our call for accountability, justice, genuine reconciliation and the guarantee of non-recurrence.

We wish to emphasize that the enforcement of law and order, and ensuring the safety and security of all Peoples including the Muslim People is primarily the responsibility of the State. Recent events have shown that the State has not discharged this responsibility in a manner beyond reproach.

We therefore call upon the government to refrain from acts of partisanship and discharge its constitutional duty tobe ensureing that equal protection of the law be afforded to all Peoples in this country including the Muslim People.