Eezham Tamil circles in the island and in the diaspora, connected to charities established in Chithamparam by their ancestors, request the Tamil Nadu government, especially the Chief Minister Ms Jayalalithaa, to make legislation to protect the charity enclave at Chithamparam and to promote it as a heritage site of Eezham Tamils, participated by Eezham Tamils in the island and in the diaspora. They cited at the promotion Sri Lanka’s Maha Bodhi Society gets in India, but the dilapidated condition of the Tamil-Saiva heritage site of Eezham Tamils in Tamil Nadu. The Eezham Tamil charities at Chithamparam that record from the times of the Kingdom of Jaffna and that make an enclave around the Gnaanap-pirakaasar Tank are found in almost ruined conditions today. 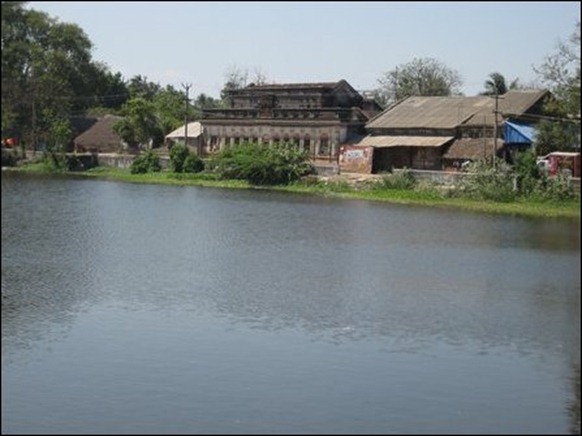 For their maintenance, these charities have large tracts of land endowments in different parts of the Tamil country in the island, including in Batticaloa.

Due to policies followed by both the Establishments at Colombo and in New Delhi, the cultural interaction of Eezham Tamils was disrupted after the so-called independence.

The inability of the managements in the island to reach out the charities in Tamil Nadu, and lack of vigilance and control on the part of the society, paved way for the misuse of the endowments, dilapidation of the charities and transfer of power to individuals in India.

They were in fact three-courtyard massive buildings. Only the walls and foundations remain in some of them. Some have become slums and one, the most prestigious of them built in the Dutch times, has become a warehouse and bakery.

To the justification of the people and the individuals who founded the charities and to make them meaningful to today’s context of the nation of Eezham Tamils that inherit the heritage, the Tamil Nadu government should take initiative in declaring the enclave as a heritage site, renovate or rebuild the structures, and create a milieu for the Eezham Tamils in the island and in the diaspora to use it and to take pride of their heritage, requested circles connected to the charities.

People having hereditary connections to the charities, now living in the island or in the diaspora didn’t want to reveal their names fearing reprisals from Colombo or from those who now lead the charities to their dilapidation.

The diaspora that spends a lot of money on temple festivals in the island and on pilgrimages to India is either not aware of the existence of such a heritage to protect or doesn’t have an organisation to take the lead, the sources connected to the charities said.

By convening the original trustees in the island and in the diaspora, heritage Saiva institutions such as the Jaffna Saiva Paripalana Sabai that is already connected to some of the charities, and relevant Saiva Mutts in Tamil Nadu, the Tamil Nadu government may take action on the project, but basic protection has to come from a legislation declaring the heritage status of the properties and the enclave, the sources connected to the charities said.

They also requested senior Eezham Tamil citizens like Mr. Ma’ravanpulavu Sachithananthan, living in Tamil Nadu for a long time and knowing the background of the said charities very well, to come forward to draft a model that would preserve the heritage, benefit the current context of the nation of Eezham Tamils and help the TN government in materialising the programme.

Saiva Temples and relevant village associations in the diaspora across the world could make a joint forum to request the Tamil Nadu government and to participate in the heritage site programme, both as a religious venture and as heritage tourism promotion, the sources connected to the charities further said.

One of the Mutts could be converted into a museum of Eezham Tamil heritage in Tamil Nadu.

The contributions of Eezham Tamils in the 19th and early 20th centuries to modern Tamil culture and to the awareness of Tamil as a classical language are well known. Many of the Eezham Tamil scholars and activists of that time viewed Chithamparam as their spiritual and intellectual centre. 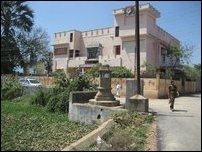 Even the Dravidian movement pioneers like Thiru V. Kalyanasundara Mudaliyar and Tamil movement scholars like Thandapani Desikar were students of Eezham Tamil teachers like Puloali N. Kathiraivet Pillai and Madduvil Kathiraivet Pillai of the Arumuga Navalar school of scholarship. Swami Vipulananthar of Batticaloa was the first Professor of Tamil at Chithamparam Annamalai University. Madduvil K. Vetpillai was living in Chithamparam for a long time as head teacher of the Navalar School. His student Thandapani Desikar was in turn a preceptor of both Mr. Karunanidhi and Mr. MGR, the Eezham Tamil sources cited.

Recorded charity endowments of Eezham Tamils at Chithamparam begin from the time of Pararaja Sekaran, the King of Jaffna in the early 16th century. He built the Raasaakka’l-Thampiraan Mutt at Chithamparam and there is a copper plate document to evidence that.

Almost during the same century or in the early 17th century, a Saiva Siddhantha Mutt based at Vara’ni in Jaffna acquired the management rights of the extensive temple complex at Thiru-ma’raik-kaadu (Vedaranyam) near Point Calimere, around 10 associated temples and 3000 Veali (roughly 15,000 acres) land, from a ruler of Tanjavur. The pontiff of the Mutt got the rights after curing the illness of the king. Saint Thaayumaanavar, before taking up asceticism, was working as an accountant to the Vara’ni Mutt at Vedaranyam.

The Vara’ni Mutt later built a Mutt at Chithamparam, the walls of which are only remaining today. 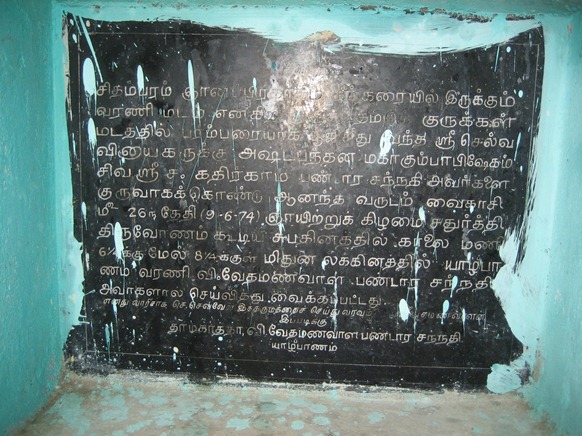 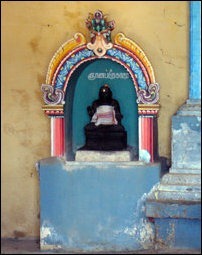 In the 17th century, a village headman of Thirunelveli in Jaffna, defying the Dutch order of supplying cattle for their food, escaped and went to Chithamparam where he became an ascetic by the name Gnaanap-pirakaasar. Besides writing commentaries to Saiva Siddhantha texts, he built a tank and a Mutt at Chithamparam. The tank known by his name and the surroundings became the nucleus for the Eezham Tamil Mutts and settlements at Chithamparam.

Part of the property of the Mutt was already taken over by the government hospital at Chithamparam. The Mutt of three courtyards that still show impressive architecture of the times including wooden features, has become a warehouse and bakery in the recent years. A Kaarainakar family is connected to the trusteeship. Both the Thiruneveli and Kaarainakar people are enthusiastic in spending money on temples but they lack the necessary outlook in organising or carrying out serious heritage missions, diaspora circles commented. 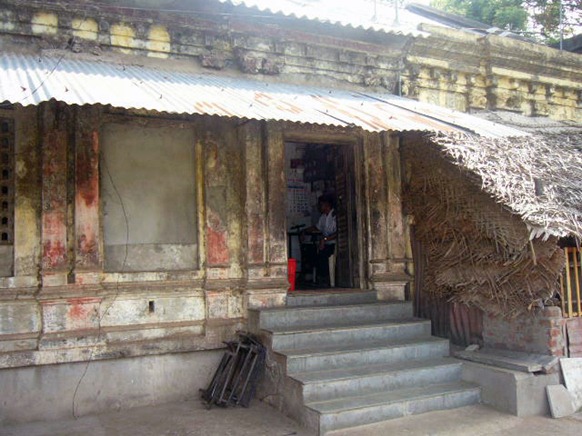 Arumuga Navalar, who was a descendant of Gnaanappirakaasa Munivar carried out a number of charities at Chithamparam. 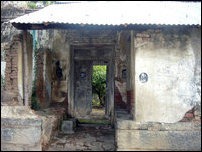 When he started a school there in the 1860s, modelled after the one he built at Jaffna in the 1840s, he wanted both the institutions to give free education and to function as advanced native institutions, teaching Maths, Agriculture, Commerce, Political Science, Geography, Astronomy, Siddha Medicine etc., besides teaching Tamil and Saivism.

He left the charities to be managed by the line of his students.

A court case in British India in the 1930s ended with the decision that the charity at Chithamparam has to be managed by whoever manages the charity at Jaffna. But the institution in Jaffna becoming an orphan and a junior school under Colombo’s take over, made the Madras High Court in the 1950s to form a 5-member Board of Management for the Chithamparam institution with two representatives from Jaffna (Saiva Paripalana Sabai and Hindu Board of Education).

Now, Kunrakkudi Mutt in Tamil Nadu has been given with power of attorney over the Navalar charities, including the house he lived at Chithamparam.

The Jaffna Saiva Paripalana Sabai still manages a charity, Pu’n’niya Naachchi Mutt at Chithamparam, which is perhaps the best-managed among the surviving Jaffna Mutts.

But, even this Mutt had to convert part of its site into a petrol shed and had to convert its traditional architecture of the three courtyard-building into a modern ‘Marriage Hall’ for its maintenance.

The Mutts in the names of the villages Ka’l’liyangkaadu and Vara’ni are in total ruin. Kokkuvil and Changkaanai Mutts are dilapidated.

The Maathakal Mutt, which is also in dilapidated conditions, has recently been brought under the management of a Chithamparam priest through a power of attorney given to him by the trustee in Maathakal. The trustee has stated in the power of attorney that it had become difficult for him to travel to and fro. Ironically, Maathakal is the nearest point in Jaffna to the Tamil Nadu coast, separated barely by 30 km of sea.

PDF: POA showing the current status of a Jaffna mutt in Chithamparam

The attached PDF of Power of Attorney documents would show the current status of the Maathakal Mutt at Chithamparam for the perusal of the Eezham Tamil diaspora.

Meanwhile, various landed properties in the island given for the maintenance of these charities are not even identifiable today. They were left for appropriation, as the charities became not relevant to the use and context of the descendants of the society that created the charities.

In contrast, the Maha Bodhi Society started in 1891, simultaneously in Colombo and Calcutta, functions as a thriving institution culturally and politically. It has been given with the management rights of important Buddhist sites in India such as Budh Gaya and Sanchi as early as in the British times.