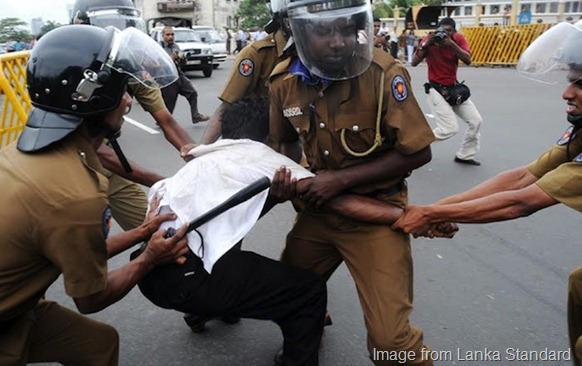 After nearly 7 years of postgraduate education and independent research experience abroad, I returned to Sri Lanka in mid 2003, to work in my mother country Sri Lanka that gave me free education all the way upto university level. When I left Johns Hopkins University in USA, some of my friends cautioned me of the danger I might face in a possible breakout of the war in Sri Lanka. Still, a strong compulsion kept me firm on the decision to return. When I was interviewed by the University of Moratuwa, where I received undergraduate education, I made it clear to the Vice Chancellor that my intension of joining the University would be to set up a laboratory to develop new technologies to detect landmines. Within a week, I went to Jaffna to see what technologies were being used by deminers. In Jaffna, I can never forget the fear I felt when I was asked to experience the life of a deminer by walking on a cleared minefield, wearing steel reinforced boots (must have been heavier than 10kg), thick protective gear, a wiser, in ambient air of about 34 degrees Celsius, inhaling dusty and dry air. My lack of courage, and shaking legs would have failed me in an interview to be a deminer, then and there. But it was a great first hand exposure to my research team. Upon our return to Colombo, I went begging from people I knew to support our research program. Some generous people donated, and the National Science Foundation also readily extended their support.

With financial issues solved, we were fully aware that our team was up against an open technical problem since World War – II. While trying various avenues to contribute, like robotic prototypes to deliver a detector safely to a minefield, training mongoose to sniff for landmines, improving existing detectors, etc, I came to know a lot of people working in Sri Lanka in this area. Personal introductions finally lead to the defense secretary Gotabaya Rajapaksa. I didn’t know about Gotabaya much, but my good experience with Sri Lankan Americans made me trust that he was also one who admires the notion of citizenship, democracy, constitutional Governance, human rights, and equality.

In year 2006, Liberation Tigers of Tamil Ealam (LTTE) took a radical tactical turn to use remote controlled claymore mines to block Madawachchi-Mannar and Habarana-Trinco supply routes. This effectively made the vegetation clearance on either sides of the road fruitless. Frequent attacks caused huge damages to ground movements of the army. The defense research units that attracted the volunteer support of several civilian engineers worked day and night to develop a counter measure to jam the LTTE remote controllers, based on some pieces of circuits found among the debris of explosions in the North. The rate of innovation of the LTTE side was so fast that the Government defense research units had to struggle to keep up with their phase. Finally, LTTE gave up using remote controlled bombs. As far as I can remember, the last attack was on the Pakistan ambassador in Colombo. To be honest, I had respect for the researchers/innovators on the LTTE side who gave a difficult time to us. They were lost talent for Sri Lanka. Yet, people contributed with the only intension of outperforming them. There were times we dived into philosophical questions like, can terrorism be separated from the context? Where do we stand in the landscape of that context? Can terrorism be beaten without ending up being terrorists ourselves? etc. Every discussion lead to one dream – the end of war would provide an opportunity to bring in a political solution to the context. Those volunteers had complete trust in the Government to make a genuine attempt to bring in a lasting peace by firmly establishing democracy, rule of law, notion of citizenship, and justice, through some credible reconciliation process after the war.

For the civilian volunteers, burning midnight oil, and then returning to work the next day was not easy. Sometimes, I got few hours of notice to browse through hundreds of pages of technical documents before sitting in technical evaluation committees. It was tiring. But the motivation to see an end to the war that kept on taking so many valuable lives kept us going. I am sure that this was the main motivation to all others who volunteered in many other fronts of the war. Somehow, in mid 2007, the situation compelled me to leave Sri Lanka. However, I kept on doing research to understand odor guided behavior of rodents and robotic locomotion from Harvard University and MIT.

After the war came to an end, silent ground forces went to rest, too tired of war, with a greater appreciation for humanity, while the racist cowards came out of their hiding places like mushrooms popping out. Unfortunately the country’s top leadership saw this as a cheap political opportunity rather than a threat to the dreams of those who toiled and died. To be honest, if I knew the close relationship between groups like Bodu Bala Sena or Jathika Hela Urumaya, and the secretary of defense, Gotabaya Rajapaksa, or if I knew of his close relationships with people of the caliber of Duminda Silva, I would have quit without any hesitation, for it could have been ample evidence of what would happen after the war comes to an end. Due to some reason, Gotabaya showed a deep interest in protecting the country’s constitution and rule of law instead.

Country’s infrastructure development saw good progress after the war. However, the critical elements of the context of Governance that we suspected to have direct influence in breeding extremism started to spiral down very fast. The way the law enforcement agencies behaved during recent public protests like the movement to release General Sarath Fonseka, the movement to protest the process of impeachment of the Chief Justice Dr. Shirani Bandaranayake, and the protest questioning the activities of Bodu Bala Sena, was shameful, filthy, and disgusting. In the case of protests to release Sarath Fonseka, we saw police mingling around with street thugs who hurled bricks and stones at the peaceful protestors. In the case of protests of lawyers to defend the constitutional rights of the Chief Justice Dr. Shirani Bandaranayake, the police openly worked among the street thugs as if they were one team. In the case of an attack on Fashion Bug, the police was watching how monks threw stones to damage private property. None were arrested on site. However, we saw how the police manhandled those who participated in a peaceful candle light vigil in Colombo, on 12th April, 2013, without a single warning to those threatening Bodu Bala Sena goons to disperse. Compounding the shameful situation, a police officer later expressed his opinion about the religious backgrounds of the peaceful protestors, as a reason to be hostile to them, as if the country’s constitution has given him a mandate to be hostile to religions he doesn’t like. Who thought stupidity and ignorance could reach this height inside a police officer’s brain, especially in the postwar era?

I wanted to point out this final message to none other than Gotabaya Rajapaksa. Please keep in mind that Sri Lanka belongs to all its citizens. You may have been entrusted by your brother Mahinda Rajapaksa to defend rule of law and peace, but keep in mind that it is not your private or family property. You are just a public servant and your job is to protect law and order to protect all citizens, not only those who are close to you, or those who have religious or political ideologies that resonate with yours or those of your family. Please don’t think that those civilians who volunteered in many fronts of research and development in the defense apparatus during the war did so because they were complete idiots, blind worshippers of Rajapaksa family, or war mongers. There was a greater dream in their minds – rule of law to be the least – that you have humiliated in broad daylight. Simply put, you are disgracing those dreams by being partial to some groups in the way you manage the ministry of defense after the war.

I am fully aware of the sentiments of most Sri Lankans, especially the Muslim community, as a consequence of mismanagement of law enforcement. My humble request to you is to continue defending your high moral grounds, to continue to choose peaceful means of expression, and to keep a firm resolve to stay in solidarity with the moderate Sinhalese masses, no matter what provocation comes yours way. Buddhists like us (those who try hard to practice Buddhism) will stay in solidarity with you to build our Nation. May Sri Lanka be a country where all its citizens feel safe to live, where all their constitutional rights are safeguarded, where rule of law sits above the tallest man, where the legal procedures respect the constitution, and where public servants serve the public, not nepotistic agendas, and where the sentiments of Nationhood rise above tribalism.