“Just 25 miles away, across the sea, there are 70 million people in Tamil Nadu prepared to give their voice for our struggle […] At the same time, the Tamils living across the world who constitute the global Tamil Diaspora, should also come forward to strengthen this struggle by taking it forward in their countries, demonstrating their strength, as they voiced for us during the last phase of the war,” said TNPF leader Gajendrakumar Ponnambalam on Wednesday, urging the Tamils in the West and in Tamil Nadu to address the concerned States that allowed the genocide in war, to remind their responsibility when the process of genocide reaches its peak four years later. He was addressing people demonstrating against SL military seizing an entire region of their lands in Jaffna.

We went to the IC during the war and told them that it was genocide. But in reply we were told that the LTTE is terrorist and the SL State’s war can’t be stopped, but they had warned the State against bloodbath. What happened is known today, Gajendrakumar said.

Four years after the war, the genocidal process has reached to its peak, with the destruction of all the pillars of the identity of the Tamil nation. The official take-over of the fertile lands of Valikaamam North that also have access to the resourceful seabed, is one such act of structural genocide, the former TNA parliamentarian and the TNPF leader said.

If we simply look at it only as a land struggle of Valikaamam people, we are only abetting our own genocide. The only power we have to day is people’s power, he further said. 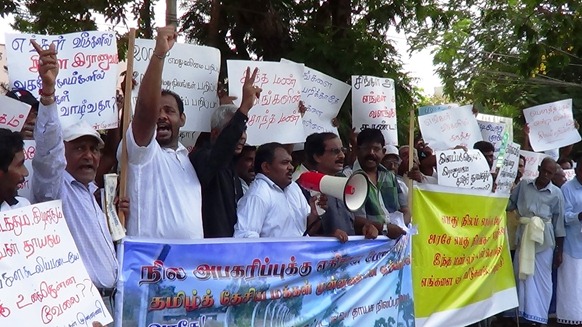 “We went to the international community while our people were being slaughtered in massive numbers during the last phase of the war. We explained to them sharply that what was taking place on the ground was a massive slaughter of genocidal character. Today it is [known as] a massive slaughter. But, after the conclusion of this war, they [the SL State] would target – one by one – all the pillars sustaining the identity of our nation. So, don’t expect that we will have a solution after the war, we told the IC. We pleaded with the IC to take constructive actions to stop the war and to pave a way for peaceful resolution of the conflict.”

“What the international community told us at that time was that the LTTE was a terrorist organization and that they cannot act to stop a legal government fighting them. However, the IC also told us that they had clearly conveyed their opinion to the Sri Lankan government that the Sri Lankan State and the Government of Sri Lanka would have to face serious consequences if there was a blood bath.”

“Today, four years after the war, the genocidal process, which comprises of the destruction of all the pillars of the existential identity of our nation, has reached its peak.”

“What we witness today in the official takeover of lands in Valikaamam North is one such act.”

“We will be giving the space to the Sri Lankan government if we continue to look at this struggle only as a struggle of Valikaamam people to get back to their lands. It will only be like abetting our own genocide.”

“Just 25 miles away, across the sea, there are 70 million people in Tamil Nadu prepared to give their voice for our struggle.”

“At the same time, the Tamils living across the world who constitute the global Tamil Diaspora, should also come forward to strengthen this struggle by taking it forward in their countries, demonstrating their strength, as they voiced for us during the last phase of the war.”

“Today, even after the end of war, the people are subjected to genocide.”

“This message should be taken up by the Tamil people living in the West and by the people of Tamil Nadu, passing the message sharply to the concerned States. Why? Because, those governments had also allowed [the SL State] to commit the genocide through the war. They could have acted earlier in stopping the war, but they didn’t. It was a cruel act. Since they failed to stop it at that time, again today, they have a responsibility in not failing to protect at least this time.”