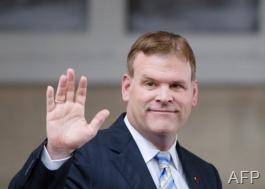 Canadian Foreign Minister John Baird has condemned the decision to allow Sri Lanka to host the Commonwealth heads of government meeting in November as "accommodating evil".

Baird spoke out after his Commonwealth counterparts in London on Friday agreed to press ahead with the meeting despite strong criticism over Colombo’s human rights record.

"We’re appalled that Sri Lanka seems poised to host CHOGM (the Commonwealth heads of government meeting) and to be chair-in-residence of the Commonwealth for two years," the Canadian minister told The Guardian newspaper late Friday.

"Canada didn’t get involved in the Commonwealth to accommodate evil; we came to combat it. We are deeply disappointed that Sri Lanka appears poised to take on this leadership role."

In Sri Lanka, the foreign ministry dismissed Canada’s criticism and welcomed decision against any censure of Colombo by the Commonwealth Ministerial Action Group (CMAG), the disciplinary body of the 54-member bloc.

"Canada can say anything, but the others agree with the Secretary General (Kamalesh Sharma) that the summit can go ahead in Sri Lanka," Sri Lanka’s Foreign ministry spokesman Rodney Perera told AFP.

"We are working on the arrangements to host the CHOGM."

The outgoing chair of the CHOGM, Australia, has vowed not to boycott the Colombo meet despite mounting calls not to attend.

Australian Foreign Minister Bob Carr said it would be counter-productive to skip the summit in the Sri Lanka.

"Any suggestion of a boycott would be counter-productive. It would simply isolate the country and render it defiant of international opinion," he told the Australian Broadcasting Corp television late Friday.

Canadian Prime Minister Stephen Harper has said Ottawa will boycott the November 15-17 meeting unless Sri Lanka investigates suspected war crimes including the alleged indiscriminate killing of civilians by government troops in the final days of the civil war in 2009.

Secretary-General Sharma said Sri Lanka had not been on the formal agenda at Friday’s talks but said it had been discussed, and there was no opposition to November’s meeting being held in that country.

It was a "collective decision", he told a press conference afterwards, adding: "No member of government has indicated remotely that it wishes to change the venue."