A draft of US defence pact proposed to the Maldives, but leaked to media a few days ago, should open the eyes of Tamils in the island of Sri Lanka, in Tamil Nadu and in the diaspora, on the game played by the USA along with the Establishments in the region, either by exploiting or by treading on the struggles of peoples in the region, commented alternative political activists in the Sinhala military occupied country of Eezham Tamils. Maldivians had made a mistake in not checking their governments supporting the genocide of Eezham Tamils abetted by the USA, India and China. It reflects on them now. Meanwhile, Global Tamils should know where the struggle of Eezham Tamils should ultimately be addressed to in unison, and what ideological stand they should independently take with people’s strength, the activists said.

The US defence draft was in fact seeking to convert the entire Maldivian archipelago into an unquestioned US base: Free movement of US defence personnel in the land, air and sea of the Maldives, use of the Maldivian territory for US installations and technological deployment built by its own contractors, no boarding and inspection on US aircraft and vessels, border control of the facilities vested with the USA, diplomatic status to the US military personnel and there by no action by Maldives against any criminal activities of them, no claim by Maldivians on any death or destruction to property, and above all not taking any disputes to any national or international court, tribunal or similar body or any third party.

The current US draft aims at a worse infringement into the sovereignty of the nation of Maldivians than what the protectorate treaty of British colonialism did in 1885, Maldivian sources said.

A full perusal of the draft would show what the USA is aiming at in the region. 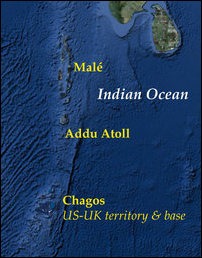 In the meantime, Maldivian media Minivan on Wednesday, related the defence draft initiation to the challenges anticipated by the USA on its lease of Diego Garcia of the Chagos archipelago from Britain, where the USA is currently having a base of nuclear facilities.

The inhabitants of Chagos were evacuated to Mauritius in 1965, and the UK paid money to Mauritius to hand over Chagos to the USA in return for some defence benefits, Minivan said. The Indian origin Mauritius Prime Minister was later Knighted for his ‘services’.

‘Environmental’ protection issues are now manipulated by the West to retain the base to the USA and to deny rights of the original inhabitants.

But, Diego Garcia is not the issue; it is capturing the Maldives and the island of Sri Lanka in the given context of challenges from the East, political observers said. A section of Maldivians from the ruling faction had a meeting recently in a US aircraft carrier that was passing through the Maldives.

Failure of New Delhi’s foreign policy in the southern part of South Asia with its exposed involvement in the genocide of Eezham Tamils and its unsophisticated advances towards Maldives became gains for the USA, political observers said.

Similar to ultimately architecting the genocidal war and not resolving the national question of Eezham Tamils for eternal benefits in the island of Sri Lanka, the democracy issue and the fundamentalism issue were nurtured ultimately for the USA to demand the defence treaty from the Maldives, political observers opined.

Meanwhile, speaking to foreign media earlier this month, the ambassador of the Washington administration in Colombo was explicit in telling the main role played by her Establishment in eliminating the LTTE.

The ambassador, taking pride on the effect of the US mobilisation that took place just a few years before the genocide, on the contrary said that the accountability and reconciliation process would take several years to come. There was nothing in her talk on righteous solutions aspired by the affected nation of Eezham Tamils.

Pre-emptive support is now given to the ‘counting-the-trees’ struggle of Eezham Tamils against the permanent Sinhala militarisation of the Valikaamam HSZ, just to silence the agitators from turning against the ultimate culprits. But no one who is aware of the military ambitions of the powers in the region would believe in the support, without seeing concrete policy perspectives, Tamil alternative political activists in the island commented.

Cautioning against powers-simulated mobilisations pre-empting people’s uprisings addressing the ultimate culprits, the activists said that the former would only lead to serve the interests of the powers, bringing in only deceit on the struggling the people. Eezham Tamils have a long experience in such deceptions, enough for the edification of the entire world, the activists said.

The strategy of targeting the struggle at agents and subordinates, that too at the advice of the very masters, without addressing the ultimate culprits face to face, is fundamentally ineffective, as the ultimate culprits will be left free to manipulate the situation with mirages as such as ‘regime changes’, the activists said.

Our so-called lobbying should not detract people’s uprisings addressed at the ultimate culprits. That is our only strength today and it should go side by side with political negotiation. If our lobbyists are in the service of the adversaries to do the job vice versa, then they are not our lobbyists, the activists in the island further said.

A Maldivian media telecast in Dhivehi language on the leaked document follows: