A copper plate grant issued by the chieftains of Vanni in the Dutch times, refers to an earlier charity; a mutt built by the King of Jaffna, Pararaja Sekaran at Chithamparam in Tamil Nadu, and on the charities made by chieftains of different parts of Vanni to another mutt built by a Vanni chieftain, Kayilaaya Vanniyan, at Chithamparam. The present conditions of the royal mutt of the Kingdom of Jaffna, called Iraasaakka’l Thampiraan Madam and the Vanni Chieftain’s mutt called Kayilaaya Vanniyan Madam at Chithamparam are not known today. The copper plates in the custody of a family at Ka’l’liyang-kaadu in Nalloor, Jaffna, were deciphered and published earlier by Dr S. Gunasingham of Trincomalee and by Prof S. Pathmanathan. A mutt at Chithamparam, in the name of the Ka’l’liyang-kaadu village is in completely ruined conditions today.

Tamil Nadu Government should initiate a survey of the various charities of Eezham Tamils at Chithamparam, bring in a legislation in the State Assembly to protect them and declare the enclave as a heritage site of Eezham Tamils, in order to make them meaningful to the present context, is a request coming from Eezham Tamil circles connected to the charities living in the island and in the diaspora.

The mutts could be renovated or rebuilt in their traditional form of architecture, for various purposes such as a heritage museum of Eezham Tamils, archives and library of Eezham Tamil literary contributions, a publishing house to bring out standard reprints, and heritage tourism facilities for visitors coming from the island and from the diaspora, the sources connected to the charities told TamilNet, adding that such facilities would especially be useful to the next generation in the Eezham Tamil diaspora in knowing about its heritage.

Cultural institutions of the Eezham Tamil diaspora across the world should make the claim and negotiate with the Tamil Nadu Government for a collaborative programme, the sources further said, adding that credible forces in Tamil Nadu should come forward to help the Eezham Tamils in materialising the project. 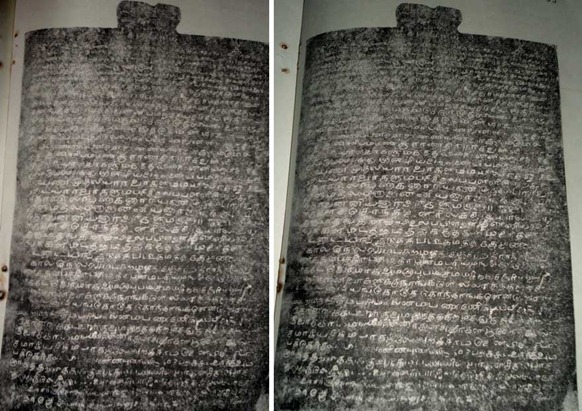 The Ka’l’liyang-kaadu Copper Plates, issued by the chieftains of Vanni on a grant made by them to the Kayilai-vanniyanaar madam at Chithamparam. The copper plates also note the existence of an earlier mutt at Chithamparam built by a King of Jaffna, Pararaja Sekaran. [Image courtesy: Pathmanathan. S., Vanniyar, 1972]

The charity was made on the 22 day of the month Chiththirai in the Subhakritu year of the Salivahana Era 1644, which was a Thursday and a full-moon day, while the moon was transiting the constellation Swathi. It corresponds to April-May 1722 CE.

The charity was in the form of paddy-field lands and the grant uses the Eezham Tamil word Kamam to mean a unit of cultivable land. Stipulated part of the produce (3 Marakkaal measures of paddy per unit of Kamam) was given to the mutt of the Vanni chieftains at Chithamparam, which was called Kayilaip-pi’l’lai Vanniyanaar Madam.

The caretaker of the charity of Vanni chieftains was Chooriyamoorthi Thampiraan who was at that time the pontiff of a mutt built earlier by King Pararaja Sekaran.

Those who help the charity would get the merit of having the dharshan of the dancing Siva at the second quarter of the night (which is considered very auspicious) and those who harm it commit the sin of arson on the temple, the copper plates say, adding that more than those who make charities, the ones who urge for them and the ones who protect them get the merit ten-fold.