The occupying Sri Lankan State has stepped up Sinhala colonization in the cultivation areas that lie between Nedungkea’ni and Ma’nalaa’ru in Mullaiththeevu district. Thousands of acres of cultivation lands, belonging to resettled Tamil people in Karai-thu’raip-pattu division, lie in the area, where the occupying SL military has been blocking access to the owners of the land to even visit their lands. But at the same time in recent days, hundreds of workers have arrived from the Sinhala South and electricity supplies are being put up to accelerate the extension of Sinhala colonization of the area, Tamil civil officials in Mullaiththeevu told TamilNet. The international aid providers not stopping the process are openly in complicity with the structural genocide of Eezham Tamils, the officials further said.

Struggle against such a structural genocide and international deception have to be primarily and face to face addressed against the principal abettors of Colombo in this regard, i.e., India, the US-West run monetary organizations and the designers of the LLRC-based resolution at Geneva that provides time and space for Colombo. But the direct struggle is still not forthcoming especially from Eezham Tamils in the diaspora, activists in Vanni said.

After seeing the US-designed, Indian fine-tuned Geneva resolution of 2013, and after listening to the latest approach of the Indian Secretary General of the Commonwealth, Kamalesh Sharma, we do not think that Colombo is just ‘misusing’ the aid, but the aid is specifically intended by the international donors for the structural genocide, the activists further said.

The Ma’nalaa’ru scheme of the Sinhala State ultimately aims at demographically and permanently delinking the contiguity of the country of Eezham Tamils in the North and East of the island. 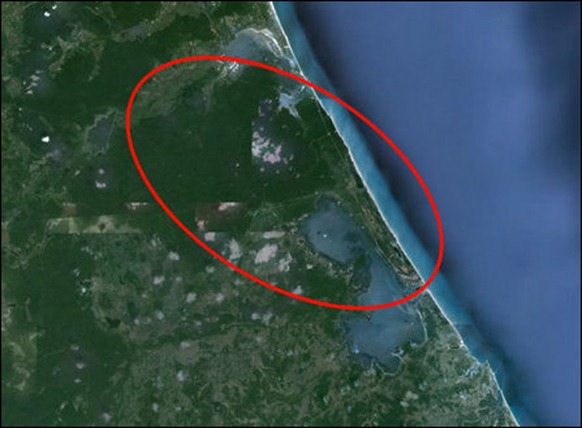 The location of the newly Sinhalicised division in the Mullaiththeevu district that will be wedging North and East, created after erasing out traditional Tamil villages and renaming it from Ma’nalaa’ru in Tamil to Weli-Oya in Sinhala. [Satellite image courtesy: Google Earth. Legend by TamilNet] 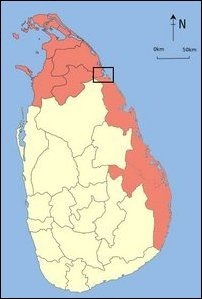 500 million rupees, allocated for the construction of educational institutions, especially secondary schools, in the Northern province for the next five years, have been completely diverted to the establishment of modern schools for the Sinhala occupants of the country of Eezham Tamils, education ministry officials in the North said.

The SL State is also deploying the aid programmes announced by India and other countries in addition to channeling the assistance by World Food Programme (WFP) and Asian Development Bank (ADB) into the structural genocide being committed on the nation of Eezham Tamils. 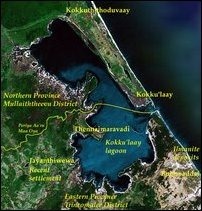 The assistance provided by foreign countries to provide electricity to the interior areas of the North where war-affected people are resettling, is diverted to Sinhala colonization scheme.

Ma’nalaa’ru region in Vanni, bordering Vavuniyaa, Trincomalee and Anuradhapura districts has already been demographically Sinhalicised by Colombo, changing the Tamil name into Sinhala as ‘Welioya’. 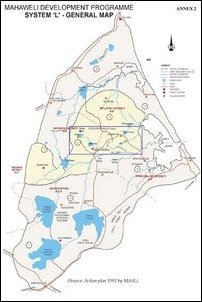 The occupation, which took a new form in 1984 under the so-called Mahaweli ‘Development’ Porgramme’s L Scheme, funded and abetted by foreign countries, later remained restricted due to the armed power of the Eezham Tamils till 2009.

In 2011, the ‘Welioya’ Divisional Secretariat, which had been earlier annexed with Anuradhapura district during the times of the war, was brought under the Mullaiththeevu District to make the expansion easier and to divert the foreign funds provided through Colombo for the ‘reconstruction and development’ of the war-affected Tamils, into the occupation scheme.

A section of the housing-scheme under the Indian assistance programme intended for the uprooted people in the North and East, is being channeled into the occupation zone, which is being created from seizing cultivation lands from the resettled Tamils.

A section of tractors and bicycles provided by India and intended for distribution among the war-affected people in the North and East, were also diverted to the new Sinhala settlers in the colonization project of the occupying Sinhala State in Ma’nalaa’ru.

In the meantime, the Sinhala settlers in these new houses in ‘Welioya’ are being provided dry rations from the World Food Programme (WFP) assistance, which is channeled through Mullaiththeevu District Secretariat.

On April 20, SL President Mahinda Rajapaksa visited the occupied and colonized Ma’nalaa’ru region and handed over land deeds to 3,000 Sinhala occupants at an event held at Sampathnuwara (meaning ‘town of wealth’ in Sinhala) school auditorium. The recipients were the occupiers of Janakapura, Gajabhapura (both Sinhalicised names), Naayaa’ru and Kokku’laay.

The uprooted Eezham Tamils, who have struggled to settle down in their villages of Karai-thu’raippattu division in Mullaiththeevu district, have been complaining that their lands, to which the occupying SL military is still denying access, are being distributed to new Sinhala settlers.

Now, the Colombo government, through its military and colonial governor of North, is appropriating the cultivation lands of Tamils and distributes them to the Sinhala settlers.

Eezham Tamil owners of 2,408 acres of lands in the occupied area have repeatedly complained against the seizure of their cultivable lands.

The extent of the cultivation lands together with the names of the Tamil owners have been detailed in an appeal sent to various officials through the divisional secretary of Karai-thu’raip-pattu and the SL Government Agent of Mullaiththeevu district (See the PDF document).

Mullaith-theevu constitutes almost 30 per cent of the total landmass of the Northern Province and is the largest district in the province and is followed by Mannaar (23%), Vavuniyaa (22%), Ki’linochchi (13%) and Jaffna (10%).

According to the last census of 1981, there were only 3,948 Sinhalese in Mullaiththeevu district.

The appeal sent by the uprooted Tamils in Karai-thu’raip-pattu in January this year details the following lands: 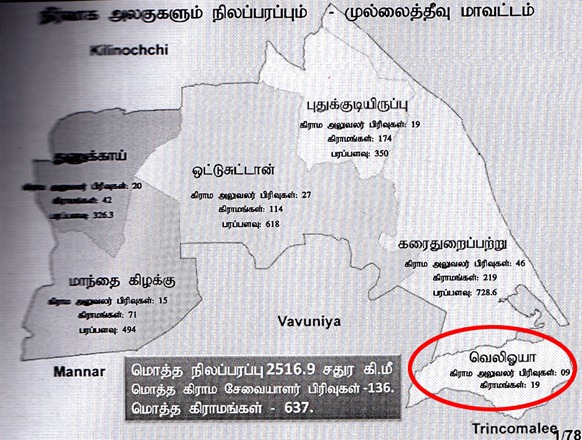