“Tamils agonize why the entire setup of Western institutions refuses to call what happened to us and what is happening to us is Genocide. Should the Tamils be surprised,” asked Dr N. Malathy, a key member of NESoHR and the author of ‘A Fleeting Moment in My Country’ at a meeting in Auckland, organized by the New Zealand Tamil Society on 5th May. “In this talk I have to convince you that there is nothing surprising in the behaviour of the Western institutions,” Malathy continued substantiating her stand and said that genocide can be mandated by a Western style of democracy. In meeting the situation, Tamils in Tamil Nadu have taken up their own course of action. Tamils in Tamil Eelam would act to suit their own conditions. The best for the diaspora is to protest in numbers as they did in 2009 and protest continuously, Malathy concluded. 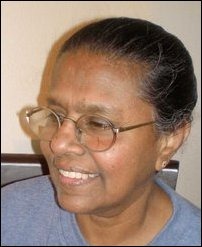 On the child soldier issue, Malathy said that there were outright lies citing the UNICEF, even when the LTTE fulfilled international obligations in 2007. She brought out the example of the case of a 7 year-old orphaned child the LTTE took care of in its children’s home, which the propaganda machinery, citing the UNICE, described as the youngest member of the LTTE.

There was bias in the reporting of the ceasefire violations during the 2002-2006 period, heavily in favour of the GoSL, Malathy said.

She accused the international media operating from Colombo for twisting and reporting the killings of civilians as killings of rebels.

The constructive side of the LTTE administration, especially in its welfare institutions, women empowerment and in caste elimination, was never reported to the world, but projected negatively by the propaganda machinery, Malathy cited the role played by Rathika Coomarswamy and said how low the propaganda machinery could stoop down.

Talking on the model of the propaganda machinery and the layers in operation, she said they would never accept genocide or Tamil Eelam. She cited the example of the plight of the Inner City Press journalist, whose material is even removed from the search engine of Google.

LTTE created an alternative model and that’s why for the West it has to be destroyed, Malathy surmised.

Accepting the genocide would justify Tamil Eelam. The West is in complicity with the genocide of Tamils. So, they will never call it genocide, Malathy said.

TamilNet: 11.05.13 Genocide could be mandated by democracy of West: Malathy