“The 40 000 plus killed in the Tamil genocide is one of the worst mass killings sanctioned by a state in history, ” stated Glen Murray, Member of Provincial Parliament (MPP) for Toronto Centre while hosting the third annual Tamil Memorial Tree Planting event on Saturday at Evergreen Brick Works, a community environmental centre. The Evergreen Brick Works houses the first memorial dedicated to the victims of the Tamil genocide and was erected in 2011 by Mr.Murray. The memorial remembers the events from Black July to Mu’l’livaikkaal and all trees are planted to create a memorial forest to honour the Tamil lives lost in the pursuit of justice and freedom, the organizers said. On the same day in a symbolic move Frank Scarpitti, the Mayor to Markham city unveiled a new street named after the Vanni, the region of the Tamil homeland which endured the brunt of the genocidal atrocities in 2009.

“This project started when we talked about what brought us to Canada. In the case of Tamils it was escaping oppression, marginalization and genocide. The 40 000 plus killed in the Tamil genocide is one of the worst mass killings sanctioned by a state in history”, stated Glen Murray while recapping on why the event is held annually. 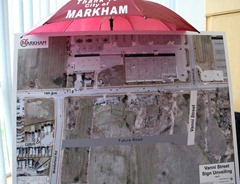 Mr.Murray drew comparisons to other communities who had suffered similarly to emphasize the importance of not only remembering but also continuing to fight.

He went on to further say, “The reason and goal of planting tens of thousands of trees is to remember all those lives lost, and this future forest can be a symbolic representation of those people. As we lay down new roots, we hope this will continue to be a living memorial, so we don’t forget. It is how we resolve that the Sri Lankan government did not win.”

Addressing the crowd of participants, Krisna Saravanamuttu from the National Council of Canadian Tamils affirmed that, “In the years to come we will make this park into a living testament to our commitment to freedom, justice, dignity and the rights of nations to self-determination." 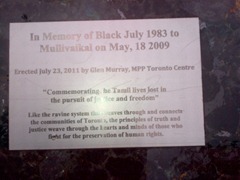 He further stated that, "We come here every year to not just remember the dead but to reaffirm our roots in the struggle. We come here to strengthen our collective commitment to fighting for Tamil justice and freedom. From South Africa, to Northern Ireland, to Algeria, the common denominator for peace and justice was an ever-evolving resistance and building international solidarity. The root causes that led to the war have intensified through a protracted genocide manifested through occupation, colonization and ethnic cleansing. When the so called international community refuses to address the root cause of the ongoing genocide our only course of action in the coming year is grassroots struggle." 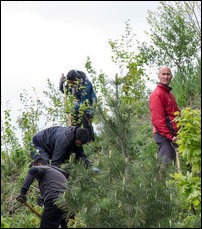 In concluding the event Mr.Murray encouraged everyone to join him in attending the annual large-scale mobilization by the Tamil community to remember the Tamil genocide on May 18th.

Earlier in the day Mayor Frank Scarpitti and Councillor Logan Kanapathi along with other members of Markham City Council hosted the official unveiling of ‘Vanni Street’ to the public.

This move is seen by the Tamil community to carry symbolic significance as the region of the Vanni suffered the brunt of the genocidal atrocities being committed on the Tamil nation.

Thanking Councillor Kanapathi and Markham city, Neethan Shan, Eezham Tamil activist and President of the Ontario New Democratic Party- commented that, “It serves as a beautiful symbol that recognizes the economic, political, social and cultural development of Tamils in Canada. In addition, it is definitely a symbol of our resistance, as it counteracts the attempts by the Sri Lankan state to erase the history of the Tamils through a concerted cultural genocide. 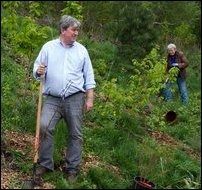 “Along with all the other reasons, I strongly feel that Vanni Street will function as a symbol for remembering all the victims of the genocide as well as the many tens of thousands of Tamils who have sacrificed their lives for our freedom,” he added.