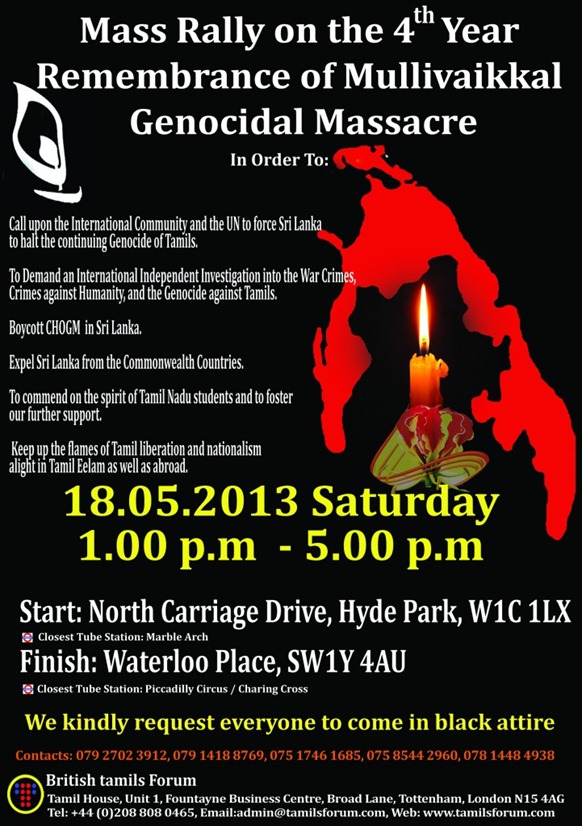 The British Tamil Forum’s (BTF) call for a mass rally in London on Saturday, remembering the 2009 Mu’l’li-vaaykkaal genocidal massacre, focuses on urging Britain and the Commonwealth to boycott the Sri Lanka CHOGM meet in November. Earlier this month, the British Prime Minister David Cameron has announced his decision to attend the meet. “It is ridiculous as well as painful to find that Cameron has decided to attend CHOGM in Sri Lanka,” said a BTF statement on Thursday, adding that the meet, leading to Sri Lanka chairing the Commonwealth for the next two years, “will not only be disgraceful to the Commonwealth and Britain, but will also create a permanent blot in their history.”

“Dignitaries and leading politicians from India, Sri Lanka and parliamentarians along with their counterparts in the UK will grace this occasion,” said the statement of the BTF, coordinating the rally.

Whether the Conservative parliamentarians would get a platform on this occasion to denounce the decision of their Prime Minister, the UK Tamils await to see.

Full text of the statement by the BTF follows:

4th Anniversary of the Mullivaikkal Massacre

Tamils all over the world will ever remember that the Mullivaikkal massacre was the climax of the continuing genocide inflicted on Tamils by the Sri Lankan government since independence.

The blatant refusal by the Sri Lankan government to give ear to the recommendations of the UN, together with its gross arrogance towards international institutions like Amnesty International, Human Rights watch and UNHCR has created an impasse in delivering justice to the victims and finding any meaningful solution to the Tamil grievances.

The BTF; having focused its attention on the current political situation in Sri Lanka, emphasises the need to boycott CHOGM to be held in Sri Lanka. BTF’s main concern is that if CHOGM-2013 is convened in Sri Lanka, automatically allow Mahinda Rajapakshe , who is already accused of Human Rights violations , War Crimes and ( a continuing ) Genocide to hold the chair of the Commonwealth for the next two years. This will not only be disgraceful to the Commonwealth and Britain, but will also create a permanent blot in their history. BTF demands that Sri Lanka be "suspend". from the Commonwealth outright, in the backdrop of its records on human rights, war crimes and the continuing genocide.

It is ridiculous as well as painful to find that Cameroon has decided to attend CHOGM in Sri Lanka, hosted by Mahinda Rajapakshe, who acts with a dictatorial attitude (in the name of democracy) in every aspect.

Dignitaries and leading politicians from India, Sri Lanka and parliamentarians along with their counterparts in the UK will grace this occasion.