Events remembering the internationally-abetted genocide in May 2009 were held in several countries in the West by the Tamil diaspora on Saturday. While over 10,000 Tamils participated in a mass rally in London, the remembrance event in Sydney had an innovative performance of ‘forum theatre’ to encourage the audience to frame their political discourse with conceptual clarity. Speakers at the event in Canada, referring to the Tamil Nadu student uprising, urged the second-generation diaspora youth to organize mass protests challenging the establishments that continue to abet the protracted genocide of the Eezham Tamil nation. Likewise, the events in London and Dusseldorf saw the participation of grassroots Kurdish activists who gave solidarity messages to the Eezham Tamil nation. 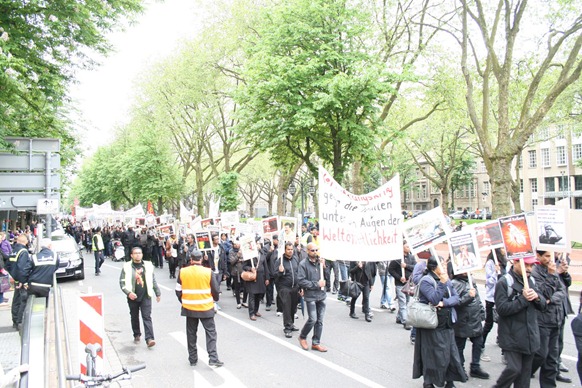 Mu’l’livaaykkaal Remembrance Day organised by the country council of Germany, VETD, and TYO 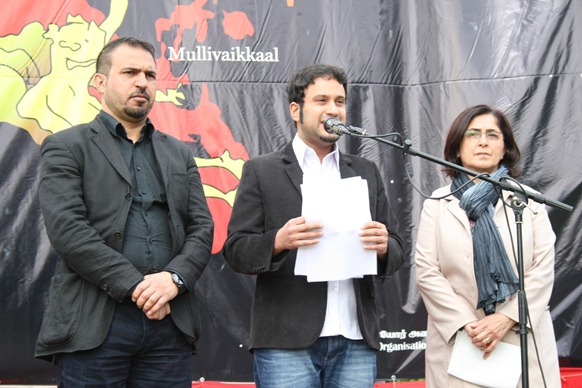 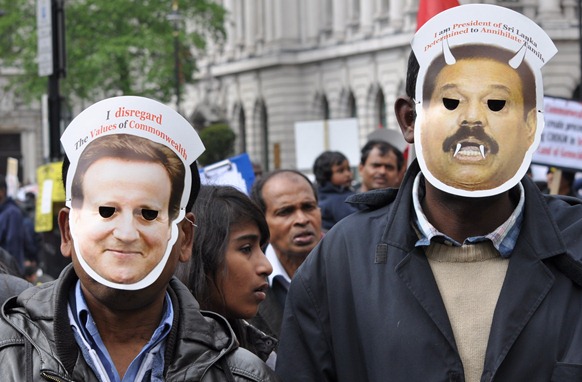 Rajapaksa mask: “I am President of Sri Lanka, determined to annihilate Tamils” and Camaron mask: "I disregard the values of Commonwealth”

Niema Movasat, German Die Linke MP, speaking at the Tamil Genocide Day remembrance event in Dusseldorf about the geopolitical interests of world powers in the island, said “None of the big international players, neither the U.S. nor the EU are willing to put the Sri Lankan government under pressure for the genocide of the Tamils to be recognized and investigated and those responsible can be held accountable.”

Ali Atalan, Kurdish activist and former Dusseldorf local parliament member, stating that the oppression and prosecution of the Tamils has not abated even after May 2009 was of the opinion that “this suppressive-murderous machinery in the state of Sri Lanka is supported by several world-hegemonic powers by many means.”

“The war of extermination, and finally the systematic massacre took place with the genocidal character could not have taken place if the foreign powers had not supported it,” Mr. Atalan further said.

Hamide Akbayir from the YEK-KOM, a Kurdish federation of mass organizations, also affirmed the need for greater solidarity among nations like the Kurds and Tamils.

Likewise, speaking to TamilNet from the rally which saw the participation of over 10,000 Tamils in London, Ms Cigdem from the Kurdish Federation, stating the similarities between the Kurdish and the Tamil nations, conveyed the solidarity on behalf of the UK Kurds.

The protestors in London shouted slogans demanding the creation of a free Tamil Eelam and an independent international investigation on genocidal war crimes, and also against British PM Cameron visiting Sri Lanka for CHOGM.

The culmination of the rally saw Tamils and British politicians speaking on the occasion. 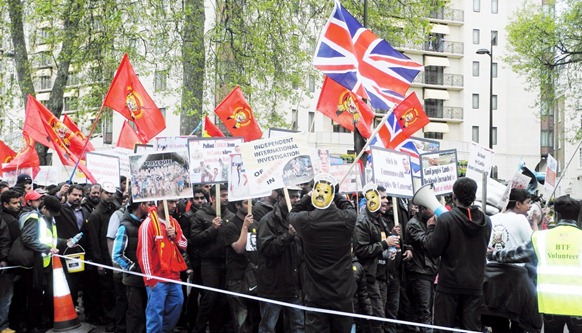 Also, a message from NSSP leader Vickramabahu Karunaratne was read out. Expressing solidarity with those remembering the massacred at Mu’l’livaay-kkaal, he said that the arrests of those commemorating the dead by the Rajapaksa regime in Sri Lanka shows how scared the government is of even dead people. 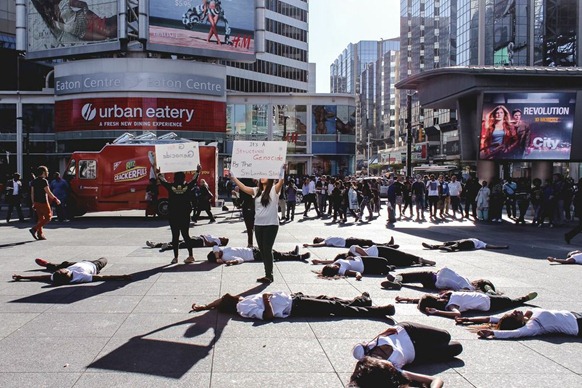 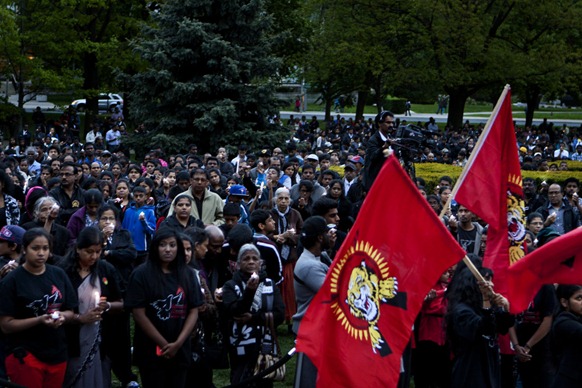 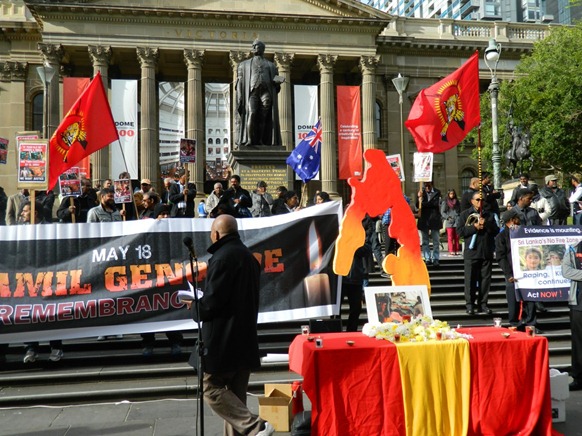 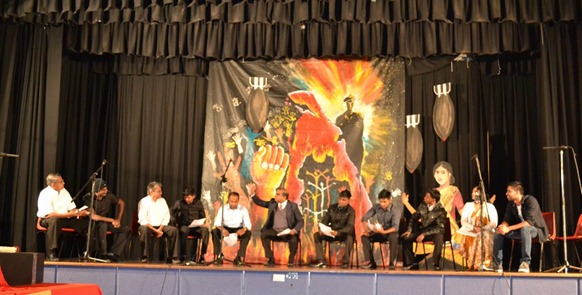 He further said that British Prime Minister gearing up to attend the CHOGM in Colombo shows the complicity of the UK in the crimes of Sri Lanka.

Speaking at the event in Toronto, Krisna Saravanamuttu, spokesperson of the NCCT, criticizing the world powers that refuse to recognize the ongoing genocide, opined that the youth in the diaspora were inspired by the Tamil Nadu students’ uprising that challenged the establishments and sought a just political for the Eezham Tamil nation on conceptually clear grounds.

“It is futile to continue telling our people who are going through genocide to take a step-by-step approach. It is absolutely useless to tell our people, unarmed defenseless people that only meet state-terrorism and savage brutality to seek reconciliation. Within a united Sri Lanka. The answer to our problem, there is only one answer independent Tamil Eelam. There is only one problem and that is genocide,” he added.

“While I am happy that all three federal and provincial parties have released statements acknowledging the Tamil community’s need for justice, we as a community must still apply pressure on our government representatives. The statements provided by the federal and provincial parties clearly show that we, as a community, have a long way to go in ensuring government representatives understand the root cause of the genocide of the Tamil people,” an Eezham Tamil activist and the president of the Ontario New Democratic Party, Neethan Shan, said.

Prior to the event, as a mobilization strategy, TYO Canada organized a flash mob demonstration in Toronto on Thursday. The action was part of a broader ‘G for Genocide’ campaign organized by the TYO and the Tamil Student Associations to draw attention to the nature of the genocide of the Eezham Tamil nation in the homeland.

At the event in Sydney, a documentary based on first hand eye witness accounts of Tamil genocide survivors was screened.

Following this, an oath, introduced by Eezham Tamil activist Brami Jegan, and repeated by the Tamil youth, affirmed to remain firm on identity, culture and the ideals of the struggle.

The event was also marked by innovative cultural performances.

The last act was forum theatre. A number of issues that exist amongst the Tamil Diaspora were brought the forefront through t forum theatre. A drama was enacted on stage portraying around 10 people who were in meeting to organize a protest next week and meet an MP. Heated discussions then took place in regards to whether Tamils should say out aha-vannakam in front of politicians and non-Tamils, whether we should take our national flag on such occasions, whether when lobbying we should use the word Genocide or restrict it to war crimes and finally whether or not the Tamils in the diaspora should be indentifying ourselves as Eezham Tamils.

The debate on stage was left to the audience. Members of the audience were encouraged to take to the stage to advise how the Tamils should approach protests and lobbying.

“Those who took to the stage expressed exactly how the grassroots Tamils feel today. They were unanimous in declaring that aka-va’nakkam should not be changed and said openly in all occasions, our flag is a symbol of identity and should be held high and with pride, when lobbying politicians we are to no more cover up what happened and label them as just mere war crimes we should let the world know the truth and that truth is Genocide,” youth activist Seran Sribalan told TamilNet.