The English edition of ‘War Journey: Diary of a Tamil Tiger’ authored by the late Capt. Malaravan has been published and released by Penguin Books, India this month. The work originally written in Tamil by Malaravan as a first-person account of the battlefield was first published by the LTTE as ‘Poar Ulaa’ posthumously in 1993. The English translation of the work by Dr N. Malathy, a key member of NESoHR and author of ‘A Fleeting Moment in my Country’, published by Penguin includes translator’s note, a description of Malaravan by the late LTTE Political Head S.P. Thamilchelvan, and a note from Malaravan’s mother. In a comment on ‘War Journey’ sent to TamilNet, Dr. Malathy said that ‘War Journey’ was an exceptional work, noting there was no space given by the establishments for writers to portray the positive aspects of the LTTE-led struggle for Tamil Eelam. 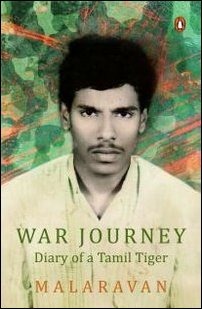 “As I scan the landscape of the literature covering the Tamil Eelam struggle pre and post 2009, I am left wondering whether this literature (or the lack thereof) is also an indicator of the degree of oppression we face. Some people have told me Eelam Tamils have done far better than many of the other struggling people. That may be so,” Dr. Malathy said.

“Yet, during the pre-2009 period, literature against the struggle for Tamil Eelam dominated the scene outside the de-facto Tamil Eelam state. This one is a rare exception. As I observe the post-2009 literary landscape, I can see that even today, our people are encouraged to produce literary work only about the suffering of the Tamils and about the mistakes made in the armed struggle,” she added.

Malathy further emphatically stated that even today there was no space for writers to portray the positive aspects of the struggle for Tamil Eelam, noting that “Those who knew the struggle intimately are still at the mercy of the three oppressors of Eelam Tamils: Lanka, India and the West. They live a precarious life in these three spaces and will not dare to write about their personal experiences and views. They are indeed encouraged to write the opposite and many do for their own safety.”

Dr. Malathy also said that Penguin India wanted a high resolution photo of Malaravan in LTTE fatigue but no one could find even one. The photos that were available were not of good resolution.

Apparently, even Malaravan’s family could not even find a photo from their album. They had kept everything related to iyakkam (the movement) in Vanni fearing to keep it in Sri Lankan military occupied regions. Thus, all family photos were also lost. This is only an indication of the level of destruction Eelam Tamils had faced, Dr. Malathy observed.

Malaravan’s concise first-person account in ‘War Journey’ of his ‘on the move’ experiences in the battlefield from Ma’nal-aa’ru to the Maang-ku’lam battle of November 1990 is an exemplar of what revolutionary humanist Frantz Fanon called ‘combat literature’, the product of writer who is not just an observer of the armed struggle but a mind and body participant in it.

The account, rich in observations on battle and war, empathetic portrayal of the oppression that Tamil civilians lived through under the Sri Lankan occupation, critical thoughts on social problems among the Tamils, reflecting the LTTE’s progressive ideology, also exhibits a poetic quality through the author’s ability to blend natural surroundings into his narrative.