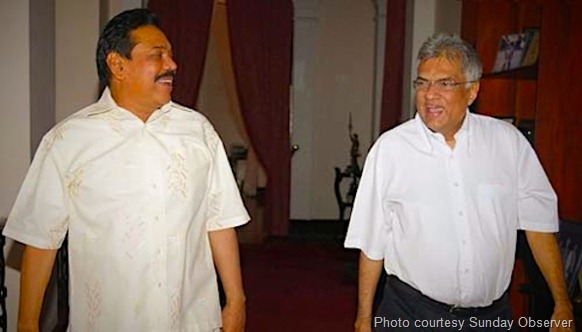 When regimes are dictatorial and dangerous, alternative forces which promise a better society and future do tend to be taken seriously by the people. This, quite simply, is because the future promised by such alternative forces tends to be better than the present. But one thing many people can’t do about the present UNP is to take it seriously. The UNP’s new constitutional proposals/principles – which it claims will shape and form the new constitution it hopes to place before the people once elected to power – tell us why this is the case (see, ‘UNP draft proposal for new constitution’, The Island, 30 May 2013). Apart from a few grand promises, the UNP’s guiding constitutional principles are generally known to the people and can be easily found, stated in different words, in the 1978 Constitution.

The new set of constitutional principles and proposals needs to be viewed in the context of the grand promise of radical transformation of party and polity which the UNP started making sometime ago; a ‘radical change’ (see “UNP’s ‘radical change’ before Exec. Comm”, Sri Lanka Mirror, 12 Oct 2012). What transpired on further inspection was that the UNP’s promise of radicalism was firstly to keep Mr. Ranil Wickremasinghe as its leader. This ‘radicalism’ was followed by Mr. Sajith Premadasa’s own brand of radicalism when he recently admitted (on Derana 360 programme) that his attempt to oust Mr. Wickremasinghe may have been a bit premature.

So it is this ‘radical’ UNP that now comes up with a document promising a more democratic country. But even before you proceed to the end of the Preamble of the document, it begins to appear why the grand promise of the UNP amounts to yet another grand farce.

For example, the UNP begins by stating that: “During the last several years under Mahinda Rajapaksa’s regime, the office of Executive President has been completely desecrated, by destroying all the checks and balances that were built into the system.” The UNP also states that the “dignity and integrity of that office has been reduced to a despicable state…”

Apart from such total confusion, it is also to be noted that any call for the abolition of the Executive Presidency, has to be accompanied by a serious and radical transformation of a number of fundamental principles and policies underlying the current constitution. The abolition of the Executive Presidency will not mean much, and cannot take place, without a more meaningful and palpable restructuring of the State and its policies towards religion, devolution, etc. Without such changes, there will only be symbolic changes, a different set of words and phrases to explain the post of ‘Executive President’.

That the UNP is nowhere near of promising such a radical transformation becomes very clear when one observes its principles concerning ‘Restoration of the People’s Sovereignty’ and ‘Devolution of Powers’.

So, for example, the UNP states that: “Buddhism will be given the foremost place while assuring the rights of all other religions in compliance with the International Covenant on Civil and Political Rights (ICCPR).” But what’s the difference between this promise and the current constitutional provision on Buddhism (Article 9 of the current Constitution)? The only difference is the deceiving and perhaps meaningless reference to the ICCPR. Not that the ICCPR is meaningless, but inserting reference to the ICCPR is meaningless if you are still going to give ‘foremost place’ to Buddhism.

The UNP cannot explain why Buddhism should be given the foremost place if all other religions are also to be accorded non-discriminatory status as per the provisions of the ICCPR. To do so, it will have to adopt the line of the Sinhala-Buddhist nationalists. But the moment it does so, the relevance of UNP’s ‘radical’ alternative becomes useless. For the people, it would be far better to stick to the current regime and its Sinhala-Buddhist nationalist groups who would do the same job for them.

So too is the case about the UNP’s principles on devolution of powers. When the UNP said it is going to be radical about such matters, one thought whether its plan was to perhaps discuss a political solution on the lines of extensive devolution or perhaps some form of a policy akin to that advocated by the likes of Mr. S. Kajendren of the TNPF (i.e. ‘two nations, one country’). Not in a hundred years, the UNP says. What the UNP is promising is as unclear as the promise made by the present regime. For example, the UNP states that the country shall be a “unitary state” (but then, we have Article 2 of the current Constitution which sets that out in very clear and unambiguous terms). And this, to be sure, will not take you any further than the 13th Amendment under current circumstances. If then, what’s so different between the UNP and what’s being promised by the current regime (or the present Constitution)?

At best, what these documents promise you is the 13th Amendment. But if 13th Amendment is what can be promised, why not stick to the present Constitution and the present regime. Furthermore, there’s nothing clearly stated about devolution in a number of these documents except for the promise to implement the 13th Amendment. The UNP does not make clear whether its version of implementing provincial-level devolution includes the devolution of land and police powers, for example. Obviously it cannot do so, given that it was only recently that the UNP stated that it is open to change on devolution (see ‘UNP is open to change on devolution’, Daily Mirror, 22 May 2013). And it was stressed therein that the UNP would even think of constructing a new mechanism based on the will of the people. What that is going to be, if opinion polls are to considered somewhat accurate, tells us that the best one could expect from the UNP is either the 13th Amendment (sans land/police powers) or the reversion to a different model, perhaps district-level devolution. So there’s no meaningful difference between this UNP and the current regime.

Also, one of the contentious issues concerning the 13th Amendment is the fact that the Governor is appointed directly by the President, and has significant powers which negate the essence and relevance of devolution and autonomy at the periphery. One of the proposals of the UNP is to abolish the post of Governor and then give all those powers to the Head of State. So the UNP pretends to address the problem and then re-introduces it in a different form. And it’s unclear how the rest of the proposed provisions on devolution can be meaningful when all that has happened is simply a change of heads (from Governor to Head of State).

Given that the UNP’s policies on some of the most contentious issues affecting the country are similar to those of the present regime, it is questionable how useful the rest of the constitutional principles (on the judiciary, independent institutions, etc) would be. Also, promising people that they will have rights such as a “right to good administration” is practically questionable given the absence of ‘good administrators’.

In a sense, it does seem that the UNP is stuck between the Sinhala-Buddhist community (which it has to please) and the international community (which it attempts to please by referring to the ICCPR, the Latimer House Principles, the Rajapaksa-Moon communiqué, the LLRC report, the UNHRC resolutions, etc., in its proposals). Ultimately, it knows that the former will be the deciding force; hence the need to affirm the unitary character of the State, the need to give Buddhism its foremost place, the need to be extremely vague about devolution, the need to show that it’s confused about the Executive Presidency, etc. This is why the people will ultimately decide that rather than going with the confused and deceiving pseudo-Sinhala Buddhist nationalists, it’s better to go with the real thing: the Rajapaksa regime and the whole BBS/Sinhala Ravaya jingbang.

In short, the UNP claims that it’s promising a radical future. What it seems to be promising rather is a radical farce. The UNP shows no meaningful hope in terms of radically changing the current political and constitutional framework governing the country. In fact, it seems to be mimicking the Rajapaksa-regime. What is necessary, it seems, is not a new leader for the UNP. What is required is an entirely different political formation; one which treats the UNP, not as an alternative force but as part of the current regime – for that’s what the UNP actually is.

[Editors note: This is an expanded version of an article that first appeared elsewhere on the web.]