If the conscience of academics and intellectuals especially in the field of culture is not prepared to boycott the genocidal State of Sri Lanka, at least in subject matters and institutions that have a bearing on genocide, how to expect politicians to boycott events such as CHOGM hosted by Sri Lanka, commented an academic in Jaffna responding to British archaeologist Prof Robin Coningham choosing to address Colombo’s Postgraduate Institute of Archaeology on a topic related to Buddhism on Saturday. Just like there were mass killings every day during the genocidal war, mass-scale structural genocide now takes place every day in the Sinhala military-occupied country of Eezham Tamils. Buddhism and archaeology are pivotal to the process. In 2010, British journalist Jeremy Page alerted the world on “the army and the archaeology department” of Sri Lanka. 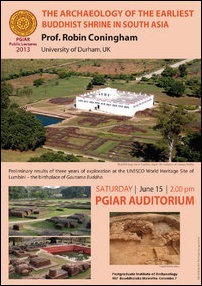 Prof Coningham of the University of Durham, UK, will be speaking at Sri Lanka’s Postgraduate Institute of Archaeology (PGIAR) on “The Archaeology of the Earliest Buddhist Shrine in South Asia,” which is about the excavations at Lumbini, Buddha’s birthplace in Nepal.

A person who visited the one and only and ‘national’ level PGIAR of Sri Lanka a couple of years back noticed that a genitor at the entrance was the one and only Tamil-speaking person in the entire institute.

But, institutions in the West and their academics caring for only ‘access’ into the island have no qualms about giving recognition and endorsement to genocidal Colombo’s institutions.

In January 2013, The Archaeological Institute of America thought of awarding a Sri Lankan archaeologist, who was long serving as ‘cultural advisor’ to Rajapaksa regime, for ‘best practice in conservation and heritage management’.

“It also gratified me to note that heritage initiatives carried out in Sri Lanka during the past few decades have been recognized by one of the oldest standing professional bodies of heritage in the world and by the community of global heritage professionals at large,” the academic who received the award said, adding that Sri Lanka had achieved it despite “reeling under the bloody carnage of a 30 year old civil war.”

“Sri Lanka is now reaping the benefits of such heritage initiatives during the post war period,” he said citing the international assistance of UNESCO, ICCROM, ICOMOS, and foreign missions especially that of Netherlands and Japan.

Quite typical of the academic ambassadors of the Sinhala State deceiving the world by their defensive projection of ‘high ideals’ to shield what is actually in the agenda, he was putting on a sane humane face in telling “protecting tangible, intangible and mixed heritage of humanity.”

But the question remains, whether their decades-long ‘advices,’ deception of ‘cultural pluralism’ denying nationhood to Eezham Tamils, buttressing of a genocidal State and regime, and the international assistances cited above have ultimately led to the practical picture of today – ‘army and archaeology,’ colonisation, Buddhicisation and Sinhalicisation committing the structural genocide and annihilation of the Tamil nation and its territoriality in the island.

Coningham is just one in the bandwagon of ‘cultural’ academics for whom the paradigm-setting genocide committed and being committed by the Sinhala State doesn’t need any boycott. New Delhi’s Romila Thapar was the first to run to Colombo immediately after the genocidal war to preach Buddhism.