The SL government move to construct a Buddhist temple adjacent to the Saiva-Vedda, Murukan temple at the Ukanthai hill sanctuary is now abandoned after heavy protests by Tamils in Ampaa’rai district of Eastern Province, but Sinhalicisation of the place continues unabated following the model of another Tamil village Paa’nama, 16 km south of Ukanthai that is now dominated by Sinhalese, news sources in the East said. In front of the Ukanthai Murukan temple, in the one and a half acres of land claimed for the Buddhist temple, hundreds of Sinhala fishermen from the South are camped now. The Buddhist temple claim is based on this camp settlement and the one who spearheads the move is the incumbent of the Paa’nama Buddhist Vihara, who was born a Tamil and converted to become a Buddhist monk, news sources further said. 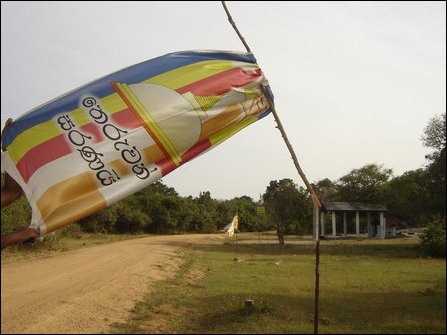 The Paa’nama ‘Tamil’ Buddhist monk’s brother is the civic body chairperson for Lahugala division, under which both Paa’nama and Ukanthai come in. With the backing of the civic body politician, the SL Asst. Government Agent of the division, the SL government Agent of the district and some Colombo politicians, the Paa’nama monk is pushing the move for the Ukanthai Buddhist temple, the news sources elucidated.

The Paa’nama Buddhist monk example foretells the kind of religious tensions the north also may face with an advent of Political Buddhism among Tamils, social observers in the East cautioned.

This should also open the eyes of those who write that the microscopic contemporary Tamil Buddhism they had discovered is quenched from both sides, by the Tamil-Saivaits as well as the Sinhala-Buddhists, and those who think that by citing Tamil Buddhism, Tamils could claim their territory, the social observers further said citing the ground realities. Saiva pilgrims to Kathirkaamam on foot at the Ukanthaimalai Murukan temple in the bottom of the hill, photographed on 09 July 2007 [Photo courtesy: Okanda.org]

Paa’nama was a Tamil village a few decades ago, where the Tamils identity has become insignificant today.

The Ukanthai Murukan temple of the Saiva-Vedda tradition used to be a camp and shelter for the thousands of Tamil pilgrims who annually go to Kathirkaamam by foot.

The place was under the control of the LTTE before 2007.

When there was a recent request to build a Mutt there for the convenience of the foot pilgrims, the SL government rejected it citing the forest sanctuary status of the place.

But now hundreds of Sinhala fishermen are settled right in front of the temple that observes vegetarianism, and recently the SL Government Agent Mr. Neil de Alwis has asked the temple trustees to part with one and a half acres of land 400 metres close to the temple for the construction of the proposed Buddhist temple. He also told the trustees to keep it a secret and not to tell media. The Saiva Vedda temple for Va’l’liyamman at the top of the Ukanthai hill, photographed in 2007. Murukan’s consort Va’l’li is considered a daughter of the Veddas. [Photo courtesy: Okanda.org]

Seeing precedents and fearing complete loss of the important heritage site, Tamil civic body chairpersons of Thiruk-koayil and Kaaraitheevu in the district visited the temple last Tuesday and urged the priests to make a protest in unison. A newly constructed Buddhist temple with flag at the top of Kudumpik-kal [Photo: TamilNet, June 2013]

Following an all-religious leaders meeting with the SL Government Agent on Tuesday, it was assured that there won’t be any construction of a Buddhist temple at Ukanthai.

Three km away from Ukanthai, there is another hill called Kudumpik-kal. A new Buddhist temple has already been constructed at the top of the hill and a monk lives there. A Buddhist flag is also hoisted on the top of the hill. A Buddhist flag is also hoisted at a place marked for a Pi’l’laiyaar temple at the bottom of another hill called Sanniyaasi Malai (the Saiva hermit’s hill).

In all these places, the official Tamil settlements that were made, when Mr. Kanakaratnam was the Member of Parliament, were systematically erased out during the pogroms. The traces of the houses could still be seen on both sides of the road. A Buddhist flag hoisted at the site marked for a Pi’l’laiyaar temple at Paa’nama [Photo: TamilNet, June 2013]