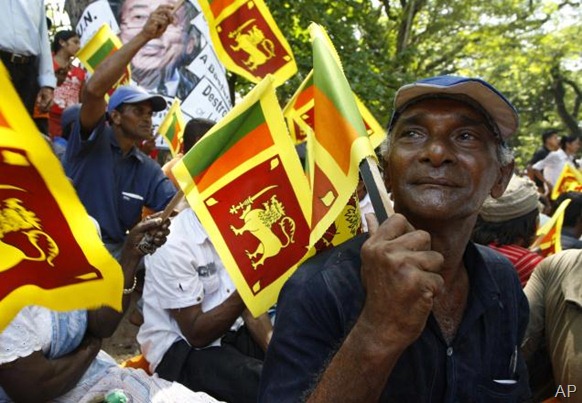 The Government of Sri Lanka recently revealed its agenda to further restrict minority freedoms and autonomy in the country. It seeks to: (1) repeal constitutional provisions granting people the freedom to determine administrative boundaries (2) amend the Constitution, so as to permit the Central government to freely and arbitrarily legislate on provincial matters — even without the consent of the people of a particular province and (3) remove altogether provincial powers over land and police. These constitutional features were first introduced through the Thirteenth Amendment to the Constitution, constituent to the Indo-Lanka Accord of 1987. Hence, the government’s agenda is in fact to dilute the Thirteenth Amendment.

The Thirteenth Amendment attempted to resolve Sri Lanka’s ethnic conflict by granting some measure of self-governance to the minorities while largely dispelling majority concerns over secession. On paper, it introduced the idea of “devolution” to an otherwise highly-centralised unitary state. The Amendment borrows heavily from the Indian Constitutional model, although it does not reach the level to which the Indian States’ exercise devolved powers. I have consistently maintained that we need to go beyond this Amendment to meet Tamil aspirations of autonomy and dignity. Yet, the full implementation of the Thirteenth Amendment is an indispensable first step to a sustainable political solution in Sri Lanka. The Sri Lankan government’s good faith — given its responsibility to the Sri Lankan peoples as well as its international treaty obligations to India — is contingent on fully implementing this Amendment.

The Thirteenth Amendment was the direct result of the Indo-Lanka Accord, an international treaty between India and Sri Lanka. The treaty acknowledges that Sri Lanka is a “multiethnic and a multilingual plural society” and that the majority Tamil-speaking Northern and Eastern Provinces are areas of historic Tamil habitation. In theory, it also limits the majority community’s ability to determine the fate of the minority communities, and seeks to create for them some space for self-governance. Underwritten by the Government of India, the agreement provides that:

1. Sri Lanka’s Northern and Eastern Provinces could merge upon a referendum among the people of those provinces

3. Power, including those over land, would be devolved to the provinces

Why do the Sri Lankan Tamils and the Tamil National Alliance oppose diluting the Thirteenth Amendment?

First, for all its inadequacies, it potentially provides a meagre but substantial bulwark against the majority domination of the minorities, including the Tamil minority. Despite devolution being meaningless or non-existent to date, the majority Singhalese Central government cannot legally force its decisions on the provinces in devolved areas of government — which cover aspects of land, policing, education, health care and broader economic policy.

Second, the Amendment performs a direct positive role by giving the minorities, and the Tamil community in particular, the potential for some level of self-governance. Under the Amendment, provinces, as opposed to the Central government, have some authority over citizen’s lives, providing some elements of self-rule. In essence, this means Tamils could potentially have decision-making power over Tamil issues.

Third, the Amendment provides some guarantees to the minorities in Sri Lanka that their status as regional decision-makers will not be diluted through demographic manipulation. Under the Amendment, minority communities of the Northern and Eastern Provinces still have the option of merging. This option is consistent with the notion that the North and East of Sri Lanka are, in the words of the Indo-Lanka Accord, “areas of historical habitation of the Tamil-speaking people.” Eliminating the ability of provinces to merge through referenda would thus be a blow to democracy and undermine the Tamil-speaking people’s struggle for internal self-determination.

First, diluting it is clearly unjust and undemocratic. India’s long-standing interest and concern for the well-being and protection of the rights of the Sri Lankan Tamils may be largely attributed to India’s commitment to upholding justice and democratic values in the region. Moreover, there remain strong, cultural, religious and linguistic bonds between Sri Lankan Tamils and the Tamils of Southern India, although the former are culturally and politically distinct from the Tamils of India. India’s entering into the Indo-Lanka Accord, which culminated in the Thirteenth Amendment, must therefore be seen as an attempt to ensure the safety, security, dignity and rights of the Tamil people of Sri Lanka. Hence, the dilution of the Amendment matters significantly to India.

Second, its dilution amounts to a breach of the Indo-Lanka Accord and is therefore a violation of Sri Lanka’s international treaty obligations to India. In the last three years, Sri Lanka’s President and Foreign Minister have repeatedly made false promises to India about fully implementing the Thirteenth Amendment and even “going beyond” it. While paying lip service to India, in practice, the Rajapaksa regime has steadily reduced provincial powers. The present move undermines the international stature of India and potentially sours diplomatic relations between the Indian and Sri Lankan governments.

Third, it increases minority discontent and closes vital political space, thereby exacerbating the ongoing conflict in Sri Lanka. These outcomes only serve to increase tensions in South India, where cultural and linguistic affinities to the Sri Lankan Tamils remain strong. Hence, Sri Lanka’s and India’s peace and stability is substantially affected by the dilution of the Amendment.

The move is unjust and undemocratic, makes a mockery of Sri Lanka’s international treaty with India and threatens regional stability. In order to prevent this travesty, India must act decisively to request a formal explanation from the Government of Sri Lanka as to the reasons behind these attempts to dilute the Thirteenth Amendment. It should also impress upon the Sri Lankan government that such an act means breaching the Indo-Lanka Accord, an international agreement governed under international law. In the face of such wanton disregard for values, diplomacy and regional stability, one wonders whether extending support to the Sri Lankan government in the run-up to the Commonwealth Heads of Government Meeting in Sri Lanka later this year is appropriate.

India’s decisive response now to oppose any dilution of the Thirteenth Amendment is both morally necessary and politically imperative. India’s principled stand on this issue will no doubt reinforce its international reputation as a global power and the largest democracy in the world.

(M.A. Sumanthiran is a Tamil National Alliance MP and a constitutional and human rights lawyer.)