Why did the DMK leave the the company of the Congress in March?

By the party’s own admission, it was outraged by the Congress-led UPA government’s stand at the UN Human Rights  Council on the US-sponsored resolution against Sri Lanka.

“Continuing in this government will be an injustice to the Sri Lankan Tamils,” Karunanidhi had said while unilaterally snapping the ties even as Congress tried to placate him.

Barely three months later, what takes Karunanidhi back to the Congress camp? Daughter Kanimozhi’s Rajya Sabha term has ended and she has to necessarily get back to the upper house.

And what about the Sri Lankan Tamils? And the outrage? Wouldn’t getting back with Congress look odd?

Well, Kanimozhi being in Parliament is extremely important for the Sri Lankan Tamils. Even they need her in the Parliament to shed tears for them.

Kanimozhi has the support of only 27 votes now and she has absolutely no chance without the support of the five votes of the Congress, even after which she is just short of a victory. Local media reports say that deals had been made to extract the crucial vote from Vijayakanth’s DMDK, ironically the party with the second highest number of MLAs in Tamil Nadu assembly, but with the least influence in realpolitik.

A pull out on a highly emotional moral issue and an opportunistic patch-up in just three months is extraordinary even by the worst political standards in India.

When Karunanidhi pulled out of the UPA, it was clear that the patriarch’s game was political – Congress was a turning out to be a liability on the Sri Lankan Tamil issue, Jayalalithaa was scoring big and emotions were running high. DMK needed to do something, at least temporarily.

But what failed was the theory by some analysts, that the split would last all the way to the national elections. This was not new for Karunanidhi, who had practised such situations hands-on for more than six decades. Perhaps he knew that the split was temporary and he could get back when the ethnic emotions cooled down.

Where else could he have gone? Even at the time of the split, his options were extremely limited and the DMDK was not too receptive to its reported overtures.

The DMK perhaps would have preferred to wait for some more time so that the Sri Lankan memories became fainter, but Kanimozhi’s entry to Rajya Sabha cannot. 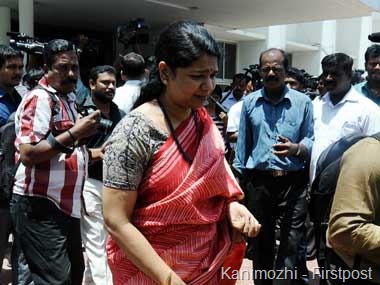 So, to hell with Sri Lanka and the three-month-long moral outrage. Get the desperate Congress on your side and get Kanimozhi in first. India is unlikely to face the Sri Lankan dilemma any time now, other than at the Commonwealth heads of governments meeting in November, which anyway will be less of a headache.

As Firstpost had noted earlier, Sri Lanka was the least of the reasons DMK pulled out in March. It wanted to exploit the ethnic emotions through such public posturing for sure, but more importantly it wanted more elbow room to take on the Prime Minister and his office on the 2G case.

The Rajya Sabha elections in Tamil Nadu were closely watched because it was the harbinger of the alliances that will play out in the Lok Sabha elections in less than a year. When AIADMK initially said it won’t support CPI’s candidature, the message was that the party will indeed go it alone; but when it finally relented for D Raja, it was clear that the Left parties will be with Jayalalithaa.

As regards the DMK, the expectations and market speculations were that it would tie up with DMDK. With its split with Congress so recent, nobody gave re-alliance any chance. But that’s the strange ways of politics.

The Rajya Sabha polls also establish the fact that the DMDK, a highly promising political formation with about 10 per cent vote share, is a party without strategy. In the last assembly elections, it won more seats than the DMK, but soon was fraught with fissures and contradictions.  Out of the 29 MLAs it has in the assembly, seven are in the AIADMK camp. Without an alliance, it will be decimated.