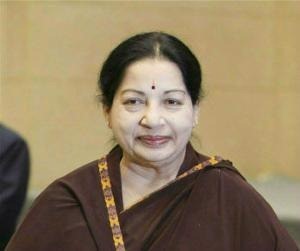 (PTI) Accusing the Centre of maintaining a "stoic and apathetic silence" over the issue of attacks on Indian fishermen by Sri Lankan navy, Tamil Nadu chief minister J Jayalalithaa has urged it to summon the Sri Lankan envoy and "strongly advise" Colombo on this matter lest the attacks should exacerbate the situation.

Referring to the latest "high-handed and illegal abduction" of 21 Indian fishermen by the Lankan navy on July 6, she told Prime Minister Manmohan Singh in a letter on Monday that the fishermen from Rameswaram in the state were learnt to have been remanded till July 17.

The letter was released to the media on Tuesday. She recalled the various instances of apprehensions in the past one month and also their release after "illegal detention" even as five fishermen have been in custody in a Lankan jail since November 2011 "on foisted charges."

"These rapacious onslaughts of the Sri Lankan navy upon innocent and unarmed Indian fishermen are perpetrated with a view to intimidating and browbeating them to prevent them from venturing out to the fishing waters in the vicinity of Katchatheevu (ceded to Sri Lanka by India in 1974), which my government has always claimed to be a part of the traditional fishing areas of Indian fishermen."

"Such unprovoked and violent acts of the Sri Lankan Navy unfortunately remain uncountered by the government of India. This will only exacerbate the situation and create more unrest amongst the fishermen community of Tamil Nadu," she told Singh.

The chief minister recalled she had mentioned in an earlier letter that the ministry of external affairs continues "to maintain a stoic and apathetic silence," on this matter and that it appeared as if no effort had been taken to engage Sri Lankan government in any dialogue to solve this "vexatious issue."

Jayalalithaa said the numerous incidents of arrest of Tamil Nadu fishermen by the Sri Lankan navy, especially in the recent past, need a strong and co-ordinated diplomatic response by the Centre at the highest level.