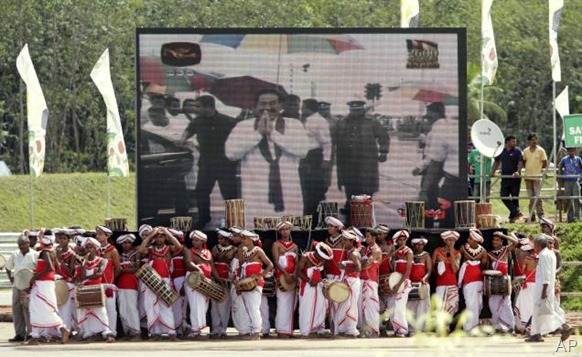 The Northern Provincial Council (NPC) election in Sri Lanka is expected to take place later this year. Colombo is entertaining hopes that holding the elections will help win India’s support in multilateral venues. New Delhi has made the 13th amendment to the Sri Lankan constitution — a by-product of the 1987 Indo-Lanka Accord — the centrepiece of a political solution. The Indo-Lanka Accord purportedly addresses the Tamil issue but most importantly for India, also contains important provisions on security-related matters between the two states. Safeguarding the 13th amendment in some form is important to keep the Indo-Lanka Accord alive. The Sri Lankan government has been playing the “China card” to lessen pressure from India. New Delhi returned the favour by its qualified support to the two U.S.-sponsored resolutions on Sri Lanka at the U.N. Human Rights Council in March 2012 and March 2013.

President Mahinda Rajapaksa would have liked to amend the 13th amendment before the NPC election, but has no option but to leave it untouched, thanks to pressure exerted by India. Nonetheless, India’s breathing down Colombo’s neck is allowing for a more strident expression of Sinhala Buddhist nationalism to take hold. The pioneers of this increasingly brazen show of nationalism, led by the Defence Secretary and Rajapaksa’s brother, Gotabhaya, as well as ministers within the ruling coalition, are calling for the 13th amendment to be repealed or amended into nothing. As such calls grow, President Rajapaksa’s stance appears increasingly duplicitous — silently encouraging the anti-13th amendment hysteria, while distancing himself from it to appear presentable to India and the West. For now, he seems to have shelved plans to dilute the 13th amendment. Nevertheless, as Minister for Economic Development Basil Rajapaksa’s recent interview to The Hindu (“Cannot risk a parallel army in North: Basil,” July 19, 2013) confirms, Colombo has not given up totally on this goal — presumably, the 13th amendment will be watered down after the NPC election. Given the state of the judiciary in Sri Lanka, following the impeachment of the Chief Justice of the Supreme Court in January 2013, as well as the two-thirds majority Rajapaksa enjoys in Parliament, there seems to be no significant challenge to passing these amendments postelections. While some left leaning parties in Rajapaksa’s coalition and the Sri Lanka Muslim Congress have asserted that they will not support any such move, these critics have previously proved themselves to be politically amenable. For India, the NPC election being held without any amendments to the 13 amendment will suffice.

The Tamil people have been reduced to mere spectators in this powwow between the two governments. No one has asked the Tamil people what they stand to gain by holding the Northern Provincial Council election or more widely, with the 13th amendment.

The 13th amendment is no starting point to a political solution. It sits within a highly inflexible unitary state framework. The Governor of the Province, a Presidential appointee, must consent to any bill that has financial consequences and can delay legislation brought before the provincial council under the pretext of unconstitutionality. He/she has plenary powers (appointment, dismissal and transfer powers) over the Provincial Public Service. State land alienation, prime among Tamil concerns, continues to be vested almost exclusively with the President. Most policing powers remain retained for the National Police. Meanwhile, appointments to the Provincial Police Service will be strictly controlled by the Central government.

Even the appointment of the Deputy Inspector General of Police of the Province — in the eventuality that the Chief Minister and the IGP fail to reach a consensus — becomes a matter for the President. Crucially, issues relating to the developmental and livelihood needs of the Tamil people are not “devolved” to the provincial councils. For example, “planning” is mentioned in the provincial council list but is also a subject in the concurrent list. The concurrent list incorporates all that is crucial for the immediate reconstruction of the livelihood of the war-affected population, including fisheries, agriculture, social services, and employment planning at the provincial level. On top of all this, there is the unconstitutional, illegal Presidential Task Force, which has to approve every single developmental programme carried out in the North. As it is, the 13th amendment has been further weakened by successive governments through unilateral Central government legislation and executive fiat.

Up to the end of the armed conflict, Tamils have consistently rejected the 13th amendment — not only the LTTE, but also the Tamil United Liberation Front (TULF) which had initially been engaged in a dialogue with Prime Minister Rajiv Gandhi regarding its contents. Poignantly, at that time, the TULF asserted that Sri Lanka did not show the final version of the 13th amendment to India before it was presented to Parliament.

The current leader of the Tamil National Alliance (TNA), R. Sambanthan was part of the trio who represented the TULF, in the TULF-Rajiv Gandhi talks.

The TNA is under pressure from India to accept a solution based on the 13th amendment, and does not want to be seen as rejecting something that President Rajapaksa is reluctant to offer. As a result, Tamil representatives are engaged in a futile battle with those who call for it to be repealed, to save whatever little is left in the 13th amendment. It is a wholly nonsensical debate: those who want to repeal the 13th amendment argue, quite misleadingly, that it significantly devolves land and police powers to the provinces. They also call for Parliament to be stripped of its powers to enable a merger of the North and Eastern provinces — when even the main opposition party (the United National Party) is against such a move. Just as misleading are attempts by those campaigning for the 13th amendment, including India and the TNA, to convey to the Tamil people that it is a good starting point to a political solution.

What then is the future of the 13th amendment? The more prudent sections of the Sri Lankan government are likely to prevail and the amendment, in some form or the other, will be retained. However, it is probable that the Government after the Northern Provincial Council election may try to remove the symbolic references in the 13th amendment that create the impression of granting land and police powers to the province; and make a merger of the North and East a legal impossibility. India may object to such measures: but in the midst of all this hysteria, any attempt towards finding a genuine political solution will be lost.

(Kumaravadivel Guruparan is a lecturer in law at the University of Jaffna, Sri Lanka.)