An archaeology website of Sri Lanka on Thursday claimed that the Maritime Archaeology Unit of the Central Cultural Fund (an exclusive Sinhala outfit of the genocidal State) had found a Brahmi inscription in “Sinhalese Prakrit language” at Delft (Nedun-theevu), the farthest inhabited island off the Jaffna Peninsula. The claim was based on a four-letter fragment found on a coral slab of the base of a possible Buddhist stupa, locally called Vediyarasan Koaddai. When it comes to Brahmi and Prakrit, many Sinhala archaeologists choose to forget ‘Sri Lanka’ but imagine ‘Sinhala,’ commented academic circles in Jaffna, rejecting the connotations with which the nomenclature “Sinhalese Prakrit” is conceived and is projected nowadays. 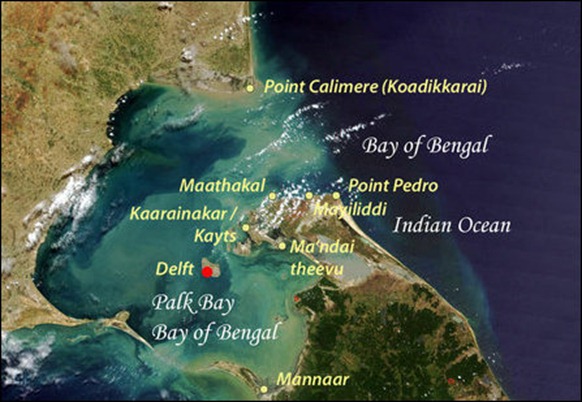 The four-letter word, claimed to be in Brahmi script, has been found amidst scattered fragmentary writings and sometimes just single letters in Tamil script. Using scattered coral blocks, the ruined base was several times rebuilt in the past by Colombo’s archaeology department.

According to the website, archaeology.lk, the writings in Tamil belong to 14-15 centuries [AD] and the Brahmi would date back to 1st or 2nd century [AD].

The Brahmi inscription had been written in “Sinhalese Prakrit language,” the website cited Rajarata University lecturer, Chandima Ambanwala, who is also the co-founder of the website.

What was the ‘Sinhala’ element found in the four-letter word, differentiating it from any other Prakrit, if at all it could be read in Prakrit, asked academics in Jaffna.

The whole thrust of the nomenclature “Sinhalese Prakrit” used by the Sinhala archaeologists, is to tell that the earlier people of the Delft island were Sinhala-Buddhists and Tamil has come much later.

Delft (a name given by the Dutch, Neduntheevu in Tamil) is the farthest inhabited island off the Jaffna Peninsula but is the closest to the coast of Tamil Nadu.

The place where the monuments are found is called Periya-thu’rai, meaning the big port, and that is the point from where the shortest passage towards Rameswarm in Tamil Nadu was made in the past.

According to folk memory, milk and flowers for the temple rituals of Rameswaram were going everyday from Neduntheevu. The distance is barely 20 miles and wind directions favour quick navigation.

The idea behind the ‘Sinhala Prakrit’ archaeological projection now is to build a military-Sinhala-Buddhist base at Delft to check the Tamil Nadu coast and to progress with the annihilation of the nation of Eezham Tamils in the island, political observers in Jaffna said.

Like having an exclusive Sinhala military and chapters of Sinhala-Buddhist monks, the Sri Lankan State was long grooming a ‘cultural’ force of exclusive Sinhala archaeologists for the implementation of the genocidal agenda.

Like providing training for the Sinhala military, various world Establishments were helping the grooming of this genre of ‘archaeologists’ also under different programmes, without caring the ethnic exclusivity of the people selected by the genocidal State for training.

A couple of years back, a British journalist encapsulated the picture by his cliché “Army and the Archaeology Department.”

The picture is the same in various other fields of knowledge too, imperceptibly affecting the challenging capacity of Tamils in the island in every walk of knowledge and paving way for their structural genocide, academics in Jaffna said.

PDF: ICES publication on ‘History’ after the war by Nirmal Ranjith Dewasiri

A recent ICES publication, ‘History’ after the war: Historical Consciousness in the Collective Sinhala Buddhist Psyche in Post-War Sri Lanka, written by Nirmal Ranjith Dewasiri, has aptly brought out what happens in the name of archaeology in the island, and this would help to understand the Delft story in all its nuances, academics in Jaffna said.

One of the strategies is to come out with alternative Sinhala forms for many Tamil place names in the North, so that they will be irrefutable evidence of the Sinhala-Buddhist heritage, Dewasri cited the example of writing Mullaith-theevu as Moola-deepa [the Tamil name means the island of Mullai, a shrub of edible leaves, but the Sinhala alternative means the island in the corner]

A culmination of the political and ideological significance of this new wave of North-bound Sinhala-Buddhist pilgrimages and new naming patterns can be observed in an area called ‘Kandarodai’ in the Jaffna peninsula, Dewasri cited with the following observations:

“The conversion of this site into an exclusively Sinhala-Buddhist space can be seen as the emergence of a parallel ‘super space’ in the middle of the Tamil North. I argue that this ‘super space’ is constructed as a part of the broader strategy to dominate the postwar North.”

“The defeat of the LTTE and the subsequent military occupation of the North along with a severely weakened Tamil nationalist opposition provided Sinhala-Buddhist ideology an ideal opportunity to reclaim this land as actual Sinhala-Buddhist territory. Kandarodai is a microcosmic representation of this much larger project.”

While writing on the Sinhala pilgrims who come to see Kantharoadai, Dewasri said, “All of them were unaware of the Tamil name and only knew the Sinhalised form ‘Kadurugoda’.

“One pilgrim thought that the place may have flourished in the past and might have been destroyed by Cholas (note that Cholas are popularly seen as destroyers of Sinhala-Buddhist civilization).”

“When asked whether the surrounding place needs to be occupied by Sinhala people in the future in order to guarantee the protection and wellbeing of the place, everyone gave affirmative answers. Everyone welcomed the presence of the military in order to protect the place but suggested that permanent Sinhala residents may be helpful in the long run.

“The war seems to have posed little or no moral questions in the Sinhala-Buddhist mind.”

“There seemed to be no sense of remorse whatsoever in the Sinhala-Buddhist psyche. What happened instead was that Sinhala-Buddhists perceived themselves as rescuers of innocent Tamils from the clutches of LTTE terrorism — an attitude very well represented by the term ‘humanitarian operation’.”