A day long international conference of youth held last Saturday in Chennai raised its voice against the Commonwealth Heads of Governments Meeting (CHOGM) scheduled to be held in Sri Lanka in November this year. The conference decried Colombo government as a fascist, genocidal force that killed over 150,000 Eezham Tamils in the last phase of the 2009 war. Over 700 participants took part in the conference expressing concerns over holding the Commonwealth meeting in Sri Lanka. 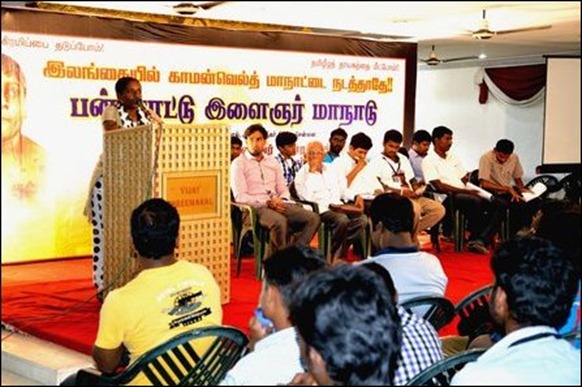 Prominent leaders and activists took part in the conference.

The conference accused that even after the war, the militarized SL government has stationed hundreds of thousands of Sinhala military personnel in the homeland of Eezham Tamils.

A resolution passed in the conference pointed out that the genocidal, fascist government in Sri Lanka was was taking up rapid Sinhalisation of the Tamil homeland and that the CHOGM was only an attempt to remove the stains of blood from the SL State.

Organised jointly by Save Tamils, a team of IT students and professionals from Tamil Nadu, and the Students’ Struggle Committee for Tamil Eelam, the conference condemned the Indian government for ignoring the sentiments of Eezham Tamils and proceeding to announce Colombo as Commonwealth’s honorary head for the next two years.

Besides demanding that the Commonwealth meeting should not be held in the island, the conference also passed a resolution demanding that a referendum be held among Eezham Tamils living in the island and all over the world on deciding their political solution. 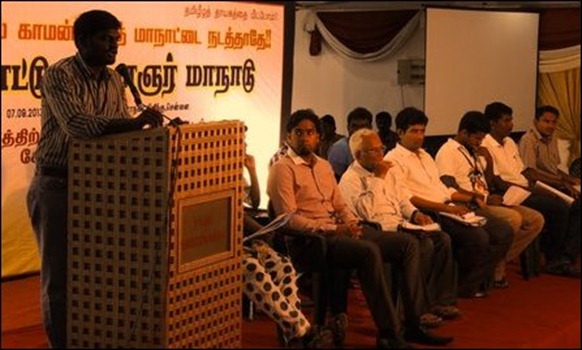 For the first time in Tamil Nadu, students from London, Kharagpur and also from various districts of the state have participated in the conference extending their solidarity towards the cause of Tamils in Sri Lanka, calling on the Indian government to boycott the Commonwealth Summit to be held in Sri Lanka, the organisers of the event said in a press statement issued on Tuesday.

Mr Vaiko, the general secretary of MDMK, reiterated over the history of countries that were expelled from Commonwealth’s nations for committing human rights violations that were many times lesser than the massive structural genocide committed by the Rajapaksa government. He named India as a ‘co-accused’ nation which tries to suppress the arising voices against it for its guardian role played in the genocide by lobbying its ways to enthrone Rajapaksa as the common wealth head. On an ending note he warned that if India wants to preserve its unity with Sri Lanka, it will be only at the cost of shattering the unity within India.

Parimala, Save Tamils Movement, explained about how India betrayed Eezham Tamils since the independence of Sri Lanka.

Comrade Thiyagu explained the audience about the significance of the boycott CHOGM demand and how it would impact the justice for Eezham Tamils if we fail in this demand. Thiyagu had earlier announced his fast unto death protest demanding the boycott of CHOGM in Sri Lanka starting from September 26, 2013 , the remembrance day of Martyr Dhileepan.

“The Sri Lankan government had dismissed the Chief Justice Shivani Bhandaranayake, jeopardizing the independence of judiciary. When  Fiji, Nigeria, Pakistan and South Africa can be suspended from the Commonwealth of Nations, why not Sri Lanka, which continues with its structural genocide by destroying temples, churches and mosques?” Prabhakaran, a student of IIT-Kharagpur, asked.

Writer Jeyaprakasam said that Sri Lanka has never been a friendly nation to India. Whereas India sees Pakistan and China as a threat, it refuses to recognize Sri Lanka a potential threat in the south. He stated that India should not participate in the Commonwealth of Nations. 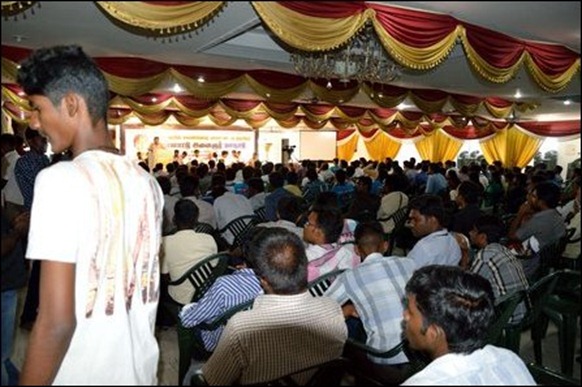 The seven point resolutions passed by the conference are: