While the Indian media, The Hindu and The Times of India, highlight NPC chief minister candidate Mr CV Wigneswaran condemning the call for Tamil Eelam and the call for boycotting the CHOGM meet, the focus of genocidal Colombo seems to be on targeting Ms Ananthi Sasitharan, the Tamil homeland-based candidate, who has become popular among the people. On the morning of Saturday, which is election day, the popular daily in the North, Uthayan, was faked and in its name, a newspaper was circulated saying that Ms Ananthi has joined the Colombo government. The fake paper cited Mavai Senathirajah. Meanwhile, news reports from several parts of the North said that the occupying SL forces are intimidating and preventing Tamils from voting. In Mullaiththeevu, a voting booth captured by Sinhalese prevented local Tamils from voting. Despite the odds, people are seen actively engaged in voting. 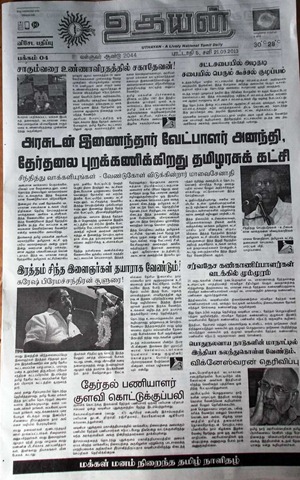 A group Sri Lankan soldiers, who stopped a vehicle, which was taking disabled voters to election booth, opened fire and threatened the organisers, an independent election monitoring group that had organised the transport, news sources in Chaavakachcheari said.

The occupying SL military was chasing away the uprooted people from voting at Maathakal in Jaffna. The Tamil National Alliance (TNA) politicians who went to the voting booth were also harassed by the SL military, reports from Maathakal said.

Also at Thampaaddi in Ooraaththu’rai (Kayts), the people were chased away by the SL military, which was accompanied by paramilitary operatives, initial reports from the islets said. 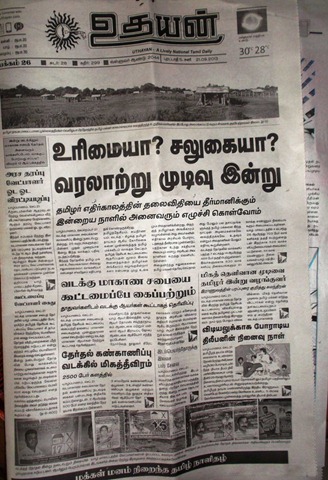 In Mullaiththeevu, common voting booths were set up for uprooted people from Kokkuththoduvaay and Karunaadduk-kea’ni. Sinhalese settlers in Tamil areas were using the booth in large numbers and the Tamils who went to vote were harassed, the reports from Mullaiththeevu said adding that there were widespread election violations being committed by the occupying SL military in the district.

On the election day, the SL military intelligence circulated a fake newspaper in Uthyan layout, which mischievously said Ananthi Sasitharan had joined the Sri Lankan government.

The SL military intelligence has also been spreading the same story earlier through leaflets. But, it has now gone to the extent of faking a mainstream newspaper in Tamil.

At the same time, Dan TV, operated by paramilitary and personalities aligned with the Sri Lankan State, also focused on the same story in their broadcast.

The spurious newspaper in Uthayan layout, faking the Ananthi story in the name of Mavai Senathirajah has also said that Mr Mavai has announced election boycott by the ITAK, the main party in the TNA alliance.

The SL military has also printed thousands of sample ballot papers with UPFA symbol and dispersed them in large numbers in the streets of Jaffna in the psy-ops war waged on the gagged people.

Despite all the odds, the people who seem to have sensed the propaganda, were actively voting as being seen in the following photos taken at a voting booth in Puththoor in Valikaamam East.

The participation is expected to be higher than in the previous elections after 2009, political observers in Jaffna said.

TNA circles were confident that they would gain two thirds majority in the NPC even if 52% of voters are able to part in the voting today.

However, Mumbai-based The Times of India, has stated on Friday that “Rajapaksa party likely to make some inroads in the north Sri Lanka”.

“Despite the Mahinda Rajapaksa regime in Sri Lanka being seen as responsible for war crimes and mass displacement of Tamils in the north, the ruling party’s prospects of winning some seats are bright. There are many who think that Jaffna and surrounding areas risk being neglected again by the government if Rajapaksa’s party, the UPFA, is kept out of the provincial council,” the paper said.

In recent times, The Times of India and its group of publications of corporate interests are actively engaged in propping up the Colombo-centric State and regime, political observers in Jaffna said. 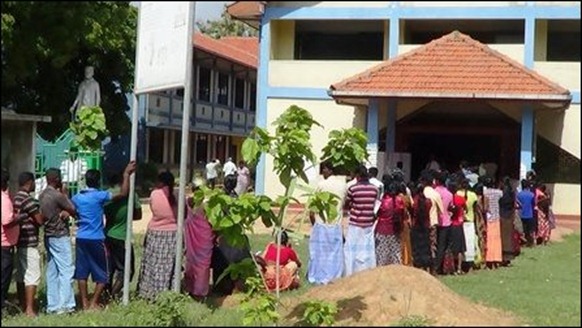 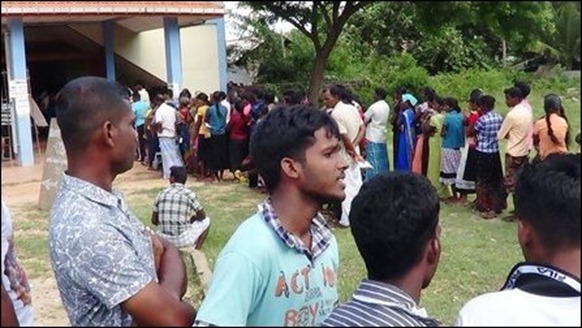