General Vo Nguyen Giap, whose legendary military victories against the occupying armies of France and the USA facilitated the independence and integrity of Vietnam, passed away on Friday evening at the age of 102. Born on 25 August 1911, the former history teacher, who taught a lesson to world imperialism in the second half of 20th century, was a self-taught soldier. General Giap’s book was translated into Tamil by the LTTE in the early 1980s. 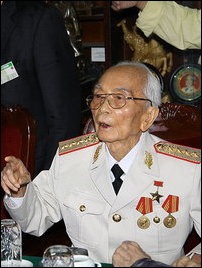 After the conclusive victory of Vietnam in 1975, against the USA and its puppet government in Saigon, General Giap was politically side lined, especially after the war with China in 1980, political analysts say.

He however continued to occasionally voice on major political trends. He was critical about corruption in Vietnam.

Eezham Tamils, especially the Left among them, were in the forefront in supporting the struggle of the Vietnamese during its crucial years in the late 1960s and early 1970s.

The ideology, strategies and tactics behind the struggle of the Vietnamese were inspirations to the militant independence struggle of Eezham Tamils.

However, Eezham Tamils were thoroughly disappointed to see today’s Vietnam supporting the Rajapaksa regime during and aftermath of the genocidal war in the island.

A 60-member team led by the President of Vietnam was one of the first foreign delegations that came to do business with Rajapaksa immediately after the war, and Colombo media patted the back of the genocidal State in Colombo by highlighting the news of Vietnamese president’s wife going for shopping in Colombo with the wife of Rajapaksa.