“We are not going to let a [Colombo-centric] group in the Ilangkai Thamizh Arasuk Kadchi (ITAK) to take a different political course than what had been promised to the people during the elections, especially with regards to our demand of international investigations and the delivery of a political solution in a unified North-East as a single unit ensuring Tamils sovereignty,” said former TNA parliamentarian from TELO, MK Sivajilingam on Saturday. EPRLF’s Suresh Premachandran, a TNA MP and PLOTE leader Tharmalingam Sitharthan, a former MP were also addressing the journalists in Jaffna. Meanwhile, Suresh Premachandran said that the NPC members who didn’t take oath on Friday will take their oath on Monday in Mullaiththeevu. “We have been part of the TNA for a long time and we will not be weakening the unity because of the newcomers,” he further said. 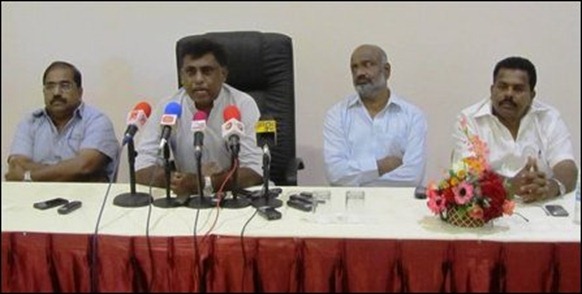 There needs to be a proper democratic decision-making process respecting the constituting parties of the TNA, Mr Suresh Premachandran said. “We boycotted the oath-taking ceremony on Friday to pass this message,” Mr Sivajilingam said.

“What we expected were not positions, but an inclusive and democratic process. The ITAK as the largest party needs to show magnanimity in dealing with other parties. It is regrettable that this has not been the case,” Mr Premachandran said questioning the motive of those who were seeking to tarnish the image of ex-militant parties in the TNA.

He has also questioned the reputation of the two coordinating secretaries appointed to Wigneswaran.

It has almost become a routine exercise for the Colombo-centric group to justify their actions by referring to ‘international diplomats’, Suresh Premachandran and Sivajilingam accused.

PLOTE’s Tharmalingam Sitharthan, responding to a question from journalists on his controversial presence at the venue in Colombo during the oath taking by CV Wigneswaran, said that he had already objected to the idea of oath taking in front of the SL president. But, he went there with the thinking that at least one NPC member should be with Mr Wigneswaran when he was taking the oath.

Despite their concerns, Suresh Premachandran and MK Sivajilingam were seen using controversial political terms such as ‘minority nationality’ and ‘internal self-determination’, in the same way the Wigneswaran-trio were deploying these terms.