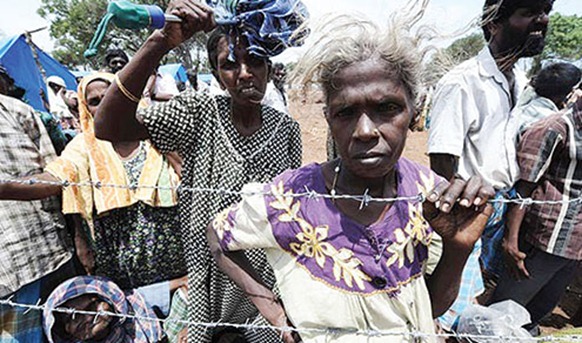 The aftermath of Sri Lanka’s decades of civil conflict have left not only massive damage of physical property, both public and private, requiring extensive reconstruction but also many households and even whole communities affected by the conflict through loss of loved ones, loss of property including homes, personal injuries, displacement, disruption of children’s education, loss of means of livelihood, loss of the family breadwinner and conflict related trauma.

Many of those affected and indeed the most vulnerable are women and accordingly war widows, women-headed households, single women, female ex combatants and girl children are both numerically significant and the most vulnerable sections of the communities of the post conflict areas. The details of this situation are well researched and documented, not least by state mechanisms such as the LLRC.

The solutions for this situation, not just in Sri Lanka but the world over has also been exhaustively debated and dialogued, with the Covenant on Elimination of all forms of Discrimination Against Women, UN Security Council resolution 1325 among many other global instruments and locally the LLRC report and various national action plans all detail the consultation, gender sensitivity and women’s inclusion that should be a key aspect of recovery and reconstruction efforts.

However, Sri Lanka’s achievements in addressing women’s issues in reconstruction and recovery have been abysmal, with conflict affected women still excluded and vulnerable over four years after the end of hostilities. There are political dynamics that work to prevent an outcome, which seems universally accepted, desirable and required, both locally with solid support for the same, as well as internationally.

The first reason for this is that women are underrepresented in Sri Lankan political life. Despite our proud achievement of having the world’s first woman prime minster and one of the still few popularly elected and reelected executive presidents in the world, Sri Lankan women have not been active participants in seeking or holding public office. Currently women hold only 2% of elected positions in local government, 3% in provincial government and 6% at the national level. This is perhaps best illustrated by the fact that Sri Lanka has a man as the Minister of Women’s Affairs. An obvious way out of this situation is the principle of a quota system at election, with various models and options available on how to ensure greater women’s representation in elected bodies.

Given that Sri Lanka experimented with youth candidate quotas as a result of the 2nd JVP insurrection, some pro women measures are not impossible to achieve and should be lobbied amongst the political parties. There is some sympathy and support for these measures among the opposition parties, the UNP’s recent constitutional reform proposals being open to gender representation and the TNA appointing an unsuccessful woman candidate to one of its bonus seats at the recent Northern Provincial Council election, the other bonus seat given towards increasing Muslim representation. It is however the UPFA, though led by the SLFP a party with strong matriarchal roots, which is regrettably the most disinterested in such issues at the moment.

The second reason for this failure of addressing women’s issues and including them in recovery and reconstruction in the North and East is not primarily because they are women but because they are an excluded ethnic minority group, the Tamils. Accordingly the challenge of both including and rehabilitating the lives of the conflict affected Tamil women in the North and East is made doubly difficult by the fact that the system works against  both Tamils and women.

The best example of this is the Presidential Task Force on reconstruction in the post war areas, which is a generally well intentioned but significantly less effective apex government body appointed by the Rajapaksa administration at the end of the war, which at its inception had neither even a single Tamil nor a single woman in the nineteen (19) member body. This was a group appointed to see to reconstruction and recovery efforts in the Tamil majority North, where the majority of victims were women. Not a single Tamil, nor a single woman. Not even from the government’s own allies like the EPFP or the TMVP.

It is little wonder then that the task force has been significantly less sympathetic to more softer human needs such as post traumatic stress disorder, the need for counseling and as well as unique concerns of women. Accordingly, bringing about involvement of women in post war reconstruction necessarily requires involving and the political participation of the Tamil community. The recently concluded Northern Provincial Council election, in which the Tamil National Alliance secured more than a 2/3 majority in the Council, with the resultant ability to keep the unelected but generally assertive former military Governor on a short leash, holds the promise for a new empowerment of democratic Tamil political participation in the recovery and reconstruction process.

One hopes that not only the Presidential Task Force, but also the multilateral institutions, especially the lending institutions of the World Bank, the IMF and the ADB would be both gender sensitive and consult and engage the elected Tamil representatives of the NPC in their reconstruction programs in the North.

The third reason for this failure to address women’s issues and include them in recovery and reconstruction is democratic or a problem of Sri Lankan democracy. Sri Lanka has a representative system of government but not a responsive system of governance. Our democracy is largely limited to voting at periodic elections but our system never consults, rarely listens or is responsive to our people. Even our representative government is only somewhat representative. We have parliamentary select committees made up only of government members and constitutional reforms that are passed as urgent bills within a half day, denying even most of our elected representatives an opportunity to be heard on national issues. What chance then for civil society and especially for disempowered ethnic minorities in rural communities. Accordingly unresponsive and non representative government is the third impediment to addressing women’s issues.

These issues can be addressed through a robust engagement by civil society, religious leaders and our international friends with our government and state institutions to ensure that the required reforms to our system occur. Such reforms may not occur overnight, but overtime, with dogged persistence, history shows us that most societies, especially those with democratic roots, traditions and institutions will move towards a better path. For the sake of the resilient conflict affected women of the post conflict North and East, we should hope so.