Tamil Nadu Chief Minister Ms Jayalalithaa on Thursday moved a resolution in the Tamil Nadu State Assembly demanding the Indian Central Government to completely boycott its participation in the Commonwealth Heads of Government Meeting (CHOGM) scheduled to be held in Sri Lanka this November. The resolution was particular in demanding that there should not even be a token participation from the Indian side. Instead, India should take steps to temporarily suspend Sri Lanka from the Commonwealth till the Sri Lankan State acts upon ensuring the freedom and equality of Tamils on a par with the Sinhalese. All the political parties present in the Assembly, including the Congress, passed the resolution unanimously. 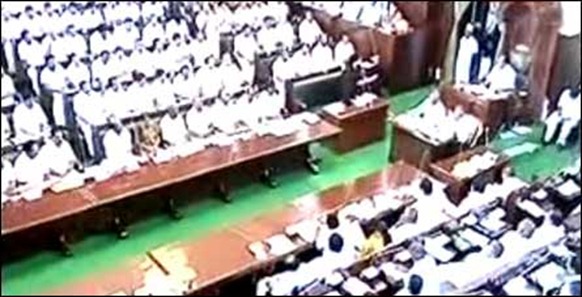 Tabling the resolution, the Tamil Nadu Chief Minister noted that when the Canadian State, where only a few Tamils live compared to India, has taken a stand of not sending its Head of Government, the Indian State, where 80 million Tamils live, should have taken a strong decision of not participating at all.

The Chief Minister has also noted that the Indian government had failed to respond to the two crucial State Assembly resolutions passed unanimously earlier on 08 June 2011 and on 27 March 2013. The Chief Minister has also noted the letters she had sent to Indian Prime Minister on the failure by the Indian Central Government in honouring the Tamil Nadu Assembly resolutions.

The Indian government failed to act on the resolution. Instead, it continued to assist Sri Lanka, including the military training provided to Sri Lanka Army in Tamil Nadu.

Following the protests and the letter from the Tamil Nadu CM to Indian PM demanding the Indian government not to provide training to Sri Lankan military anywhere in India, the training programmes to the Sri Lankan soldiers in Tamil Nadu State were cancelled.

But, as reports of Sri Lanka’s abuse on Tamils continued and new evidences surfaced, the entire Tamil Nadu was on an uprising, Ms Jayalalithaa said, adding that the second resolution demanded Indian Central Government to cease calling Sri Lanka a friendly country, wanted India to back international investigations on genocide and war crimes, impose economic sanctions on Sri Lanka and demanded India to bring a resolution in the UN Security Council for a plebiscite on the question of “separate Eezham” among Eezham Tamils in the island and in the Diaspora. But, the Indian government has not acted upon on this resolution either, she said.

She further cited the core values of the Commonwealth and the findings of the report of UN Secretary General’s Panel of Experts, in justifying the demand of the people of Tamil Nadu.

However, while supporting the resolution, the Congress Party leader has also cautioned that whatever action India takes should not lead to straining of relations between the two countries, PTI reported.

Meanwhile, MDMK General Secretary and long time supporter of the Eezham Tamil cause Mr Vaiko said that he was disappointed by the resolution as it only talks about equal status of Eezham Tamils on a par with Sinhalese in the island, but it is not stressing on the earlier resolution of the Tamil Nadu Assembly that a referendum should be conducted on the question of independence of Eezham Tamils.