The South African model that betrayed its people is now taken up by Colombo just to save war criminals. It is futile for Tamils to expect justice from any future government of SL State. Tamils also have to reconsider approaching their struggle once again through West’s mechanisms of justice. The current TNA failed to combine moderate politics with the politics of struggle. Steering Tamil national polity for crumps can’t be justified as ‘diplomacy.’ Tamil intellectuals have to think beyond the trap of ‘Transitional Justice’ and investigate potentialities of the concept Post-Transitional Justice, which is non-state, multi-sited, multi-actor and multi-referential, said Fr Elil Rajan, advocating Chile model, at a gathering in Batticaloa last week that remembered slain TNA parliamentarian Mr Joseph Pararajasingham. 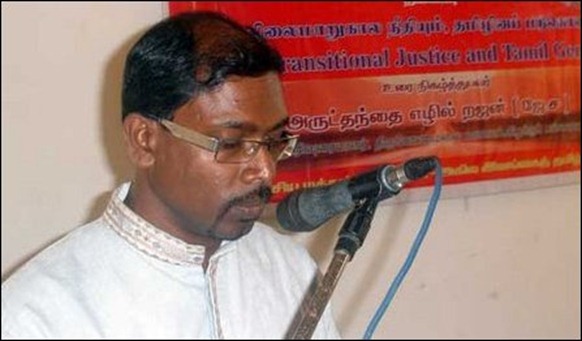 Fr. Elil Rajan delivered the 2013 Memorial Address remembering Maamanithar Mr. Joseph Pararajasingham, who was assassinated by the agents of the genocidal state of Sri Lanka on the Christmas day of 2005, while attending services at the St Mary’s co-cathedral in Batticaloa.

The meeting, organized by the Tamil National Peoples’ Front (TNPF) was presided by Mr. Gajendrakumar Ponnambalam.

Jesuit priest Fr. Elil Rajan is a part-time lecturer at the Trincomalee campus of the Eastern University.

Excerpts of the address translated into English follow. Full text in Tamil appears as pdf:

All external agendas, whether from the West of from the neighbouring country, are intent on hijacking the Tamil national polity in order to diffuse it.

The subtly programmed ‘counterinsurgency’ war waged against Tamils has to be viewed as a continuation of genocide.

If a nation has to come out of genocide, it is inevitable that it has to create a space for struggle. Such a struggle gains righteousness and acceptance when it becomes a people’s struggle. 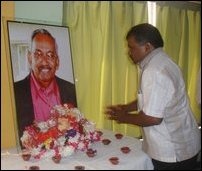 The Tamil National Alliance was formed by the efforts of Mr Sivaram to get rid of bi-polar polity. But the TNA of post-Mu’l’livaaykkaal, failing in bringing together moderate polity and the polity of struggle, is travelling on a self-seeking path of moderatism, which is sad as well as an insult to those who sacrificed their lives for the cause of Tamil nationalism. Steering the Tamil national polity for just crumps could never be justified as diplomacy.

Tamils have to take into account the hitches in approaching their struggle once again through the West’s mechanisms of justice.

The Permanent Peoples’ Tribunal in its latest session has accepted that the USA, UK and India were in complicity in the genocide.

The post-2009 situation in the island has to be investigated as a unique situation. It can’t be compared with other post-war transition situations.

While the SL State is pushing forward a South African model ‘truth and reconciliation commission’, Tamil intellectuals are compelled to investigate and raise a historic question whether the model is suitable to the island or not.

States and governments are expected to follow transition models acceptable to the international law. There are several models brought out by different geographical, political and cultural situations.

In post-apartheid South Africa, the National Party trapped the African National Congress into a situation to compromise, through insisting on punishment to war criminals of both sides. The very black politicians, who captured the government in the name of their people, abandoned the truth and the findings of the TRC commission. The people seeking justice became victims of the double exploitation polity. The South African model is the best example to question the validity of such commissions, whether any State machinery is ever prepared to accept the truth.

In the world history of the last decade, transitional justice was the most important requirement for peace. It will be a slanderous discourse if the genocide is reduced into mere human rights violations in the descriptions.

[Fr Elil Rajan extensively discussed the failure of the various truth-finding commissions and transitional justice, by citing precedence in other world situations such as Latin America, East Europe, Africa etc., and by citing the various commissions instituted by the successive governments in Colombo. As an alternative, he argued in favour of a concept, Post-Transitional Justice and cited the following from Cath Collins:]

According to Cath Collins post-transitional justice has the following characteristics:

It is futile to expect that any future government of the State of Sri Lanka could deliver justice to Tamils. Therefore, we the affected people should form our own justice mechanism either within the space of the island or outside of the island, along with global partners. The best example for such a model is Chile in Latin America. The Chile model of Post-Transitional Justice could help to institute a neutral mechanism for justice and it could bring in many benefits to Tamils. The current times compel Tamil intellectuals to consider the model of Chile, Fr. Elil Rajan said.

Responses from Tamil activists for alternative politics in the island:

The South African model pushed by genocidal Colombo is coupled with sealing and pocketization of Eezham Tamils in their own land, perhaps to suit the South African model of ‘reconciliation.’ This is engineered and blessed by all the powers that were in complicity in the genocidal war. To what extent the Chile model addresses the context; i.e., a national question of centuries of genocidal intent and an on-going genocide, is not clear, the activists said, adding that any model that was used in the transition of a country by keeping it as a country is useless to the context.

What the Eezham Tamils should demand, along with the people’s power of Tamil Nadu, deploying all possible strategies, is a transitional State for them to come out of the genocide and to freely think of post-transitional models of justice. Perhaps they should evolve their own model to meet the requirements of their case that was made into ‘unique’ thanks to the international community of establishments, commented Tamil activists for alternative politics in the island, appreciating and adding to the address of Fr Elil Rajan.