After having caused massive deaths and disappearances on the Tamil civilian population during the times of war, the Sri Lankan State now continues to commit acts of structural genocide in the Tamil land. This aims at causing demographic and identity change, ethnic subordination and dilution of Tamils political power, the Bishop of Mannaar Rt. Rev. Dr. Rayappu Joseph told the visiting US diplomat on Wednesday. The visiting delegation was primarily interested in the details of the ‘war crimes’ during the final months of the war, according to Mannaar Bishop. Mr Rapp was told that an international investigation was necessary, not to punish any individual, but to create a conducive environment, which would in turn cause an attitudinal change on the part of the Sri Lankan State. 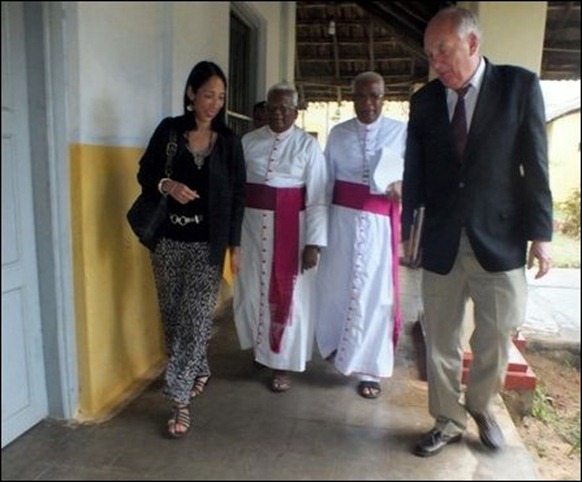 An attitudinal change on the part of the Sri Lankan State is necessary for a realistic post-conflict reconciliation to take place. One cannot expect this attitudinal change without first creating a conducive environment through the delivery of justice, was the opinion of Bishop Rayappu.

He characterised the talk of a South African model Truth and Reconciliation approach, at this juncture, as a tactic of betrayal.

The delegation also met Northern Provincial Council (NPC) councillor Mrs Ananthi Sasitharan, who personally witnessed Sri Lanka military taking away her husband, Mr Elilan, a political leader of the LTTE, at the end the Vanni War in May 2009.

Talking to media, Ananthi said she had described to the visiting US delegation that what took place in Vanni was was a genocidal onslaught. She urged delivery of political justice to the nation of Eezham Tamils. The burning issue of attending the plight of missing persons families should be a top priority she said.

Bishop Rayappu Joseph was talking to media in detail after his meeting the visiting US delegation together with the Bishop of Jaffna Rt. Rev. Dr Thomas Savundaranayagam at Bishop’s House in Jaffna.

The Bishop of Mannaar said that he had described what he witnessed from the people of Vanni, especially how cluster bombs were fired at civilians inside the Chuthanthirapuram No Fire Zone, where LTTE was not present. He also explained how the so-called air shots of aerial bombs from the war planes claimed the lives of many people. The civilians have also complained about the deployment of chemical weapons from July 2008, when it was used at Akkaraayan.

“[Earlier] when the LTTE had taken O/L and A/L students for a first-aid training, the school children numbering around 200 were bombed from the air at Vallipunam.

“During the war, medicine and food were used as weapons of war. Food-supply to Vanni was kept at a minimum level. Medicine was not supplied to the needed level at all.

It is a different story when the doctors who served in Vanni went into the custody [of Colombo] that they had to put their signatures in the documents that [falsely] stated that there were adequate supplies [sent to Vanni].

“It was obvious that these doctors were under pressure to provide false statements when they walked into the government side. However, everybody knows what happened on the ground was something else.

“No Fire Zones were attacked. The NFZ was first located at Chuthanthirapuram, consisting of Udaiyaar-kaddu, Vallipunam and Kaiveali. There was no LTTE inside that NFZ. However, civilians were attacked.

“Therefore, the civilians moved into Maaththa’lan area. However, on their move, a lot of them were killed.

“The second NFZ, announced at Puthumaaththa’lan, which also consisted of Maaththa’lan, Valaignar-madam and Mu’l’livaaykkaal, was a narrow strip where LTTE members were also present, both outside the NFZ and inside the zone.

“A massive number of people were slain inside this NFZ. Just because LTTE was also there, you can’t execute a large number of civilians inside the NFZ. Even if the civilians were held as human-shields, you can’t justify killing civilians.

“There were also earlier instances where the people, who had sought refuge at churches and temples being indiscriminately attacked. This has happened earlier in Navaali and at the St. James Church in Jaffna.

“In Vanni, the international non-governmental organizations (INGOs) were forced to leave against their wish. This is probably a move to get rid of potential witnesses.

“Even after the war, these INGOs are still not being allowed to serve the people.

“More than 500 youths were allegedly slain and dumped at Chemma’ni mass grave in Jaffna [in 1990’s]. I was serving here at that time.

“After several years, when there were legal proceedings, the Judge ordered exhumation of the mass grave at Chemma’ni. Only two or three human skeletons were exhumed. I knew that many youths had been dumped there. What happened to the remaining human skeletons at Chemma’ni?

“Likewise, there is a question to be asked on what had happened to the human skeletons of those who were subjected to a massive onslaught in Maaththa’lan during the final stages of the war. Who knows whether these skeletons are burnt to ashes now? A research is, therefore, necessary to establish what has happened to these traces.

“A large number of youth were subjected to extra-judicial arrests. There were instances of dead bodies of these youths handed over to their families.

“The figure of reported missing people is very high. Each and every case of persons reported missing need thorough investigation. Although it is a difficult task, this needs to be done. It is about the lives of human beings.

“Several survivors of the war have lost their loved ones. Many people have lost their limbs. There are many families without breadwinners. Their children have become orphans. They are in trauma.

“These figures were verified and signed by the Government Agents, detailing how many people were there in the Mullaiththeevu district and how many of these were residents from outside districts as of 20 October 2008.

“The figures at the end of May 2009 were registered by the Sri Lankan government and provided to UN’s Office for the Coordination of Humanitarian Affairs (UN-OCHA) stating how many came into Vavuniyaa from Vanni. These are all documented figures. No body is investigating this. No one is telling us what had happened to these 146,679 people. The CID came to investigate only me on this issue for 4 hours. I showed them the official records and they went all happily.

“Only if the State is genuine in addressing the post-war, there could be [reconciliation].

“But, there is a [structural] genocide going on in the Tamil land. The intention is dismantling the demographic existence and the ethnic identity of Tamils.

“The appropriation of lands and government aided colonisation schemes are continuing.

“We are not opposed to those from the south of the island coming here individually to buy lands to do their business or build houses to settle here.

“We are opposed to government-sponsored colonisation, which seeks to bring the Tamil politics to an unstable state by effecting changes in the voting structure.

“We have been opposing these demographic changes of Tamil land from year 1956.

“Large schemes are being carried out appropriating several acres of lands, at some places thousands of acres of lands have been appropriated for [Sinhala] colonisation among Tamils and there are plans to start schools in Sinhala. Then, they would make our people to enter these Sinhala schools.

“We also learn that there are plans being schemed to reduce the role of our own language in the education. There are several other moves like these.

“Buddhist monks are coming here constructing stupas and temples. There is nothing wrong in building Buddhist temples where people belonging to Buddhist religion reside. However, they just come and build Buddhist temples with an intention to exercise their power [at places where no Buddhists live].

“War is over. However, why is the Army still deployed here in large numbers? This is not conducive for a civil life and the civil administration.

“We are not even allowed to remember those who died.

“This is the prevailing attitude here.

“Only when there is an attitudinal change, one can talk about South African style Truth and Reconciliation Commission to bring reconciliation.

“A conducive environment must be brought about first. That is how things took place in South Africa where the ruling government was run by the minority. There came about an attitudinal change first, with an international effort in the background.

“This situation made it possible for Nelson Mandela to [effect an attitudinal change among] the Blacks to abandon the path of revenge and accept the Whites as part of their nation.

“But here, while committing these [injustices] against Tamils, if one talks about South African model during, it could only be a tactic of betrayal.

“The international community should conduct an investigation to establish the truth. This will bring about a conducive environment to cause an attitudinal change.

“We are not asking this to make revenge on anyone in the government. We only want this for the betterment of this country.

“Only the truth will bring us light and liberation. We should walk the path towards truth and liberation. If we work for justice, the liberation will come by itself. That will also bring reconciliation.”