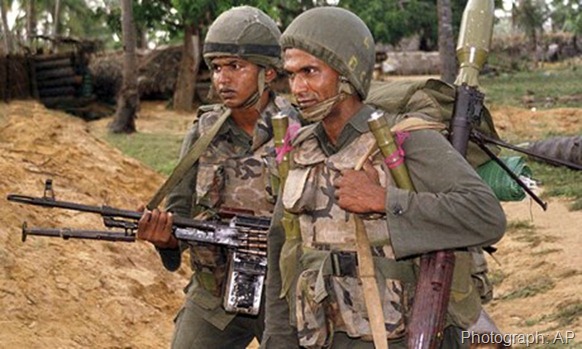 Former SAS officers were allowed by the British government to train security forces in Sri Lanka around the time of the 1980s Golden Temple massacre, recently released government documents show.

The disclosure comes days after documents emerged appearing to show that SAS officers were involved in training Indian troops in the months leading up to the raid on the Amritsar temple, the Sikh religion‘s holiest site, in June 1984.

It will intensify the diplomatic tensions over Britain’s role in the raid in Amritsar and add to evidence suggesting the government was happy to let former and serving special forces soldiers operate in India.

At the time the Sri Lankan government was trying to put down an insurgency by the Tamil Tigers and other groups in the north and east of the island.

Ricketts wrote: "The Sri Lankan government have engaged another British company [name removed] to provide training in counter-terrorist techniques … The presence of [the company’s] employees, including some ex-SAS personnel, in Sri Lanka, has aroused controversy and the Indian government have expressed concern to us about the firm’s involvement.

"We have made it clear that this is a purely commercial matter and that HMG are not involved." The firm was allowed to continue working in Sri Lanka.

The papers will be part of an investigation begun by the cabinet secretary, Sir Jeremy Heywood, on the orders of David Cameron to determine Britain’s actions in relation to the Amritsar raid.

The Indian government says that about 400 people were killed when its premier, Indira Gandhi, sent troops into the temple complex in June 1984 in the six-day operation called Blue Star.

Sikh groups, which have called for an inquiry into the British role in "one of the darkest episodes in Sikh history", put the death toll in the thousands, including many pilgrims.

Another document, relating to Sri Lanka, shows that days after the killings Thatcher was asked by Gandhi to stop helping the Sri Lankan government with military advice.

She told Thatcher: "We hope that you will use your influence to persuade [Sri Lanka’s] President Jayewardene to give a positive lead by making constructive suggestions at the All Parties Conference.

"Military aid and anti-insurgency assistance are not enough to overcome a political crisis which has to be faced and resolved."

This appears to be a reference to the Indian government’s suspicion in 1984 that the SAS was training the Sri Lankan military.

The Guardian revealed on Wednesday that Thatcher gave Gandhi Britain’s full support in the immediate aftermath of the 1984 Golden Temple raid.

Other documents in the file reveal Whitehall’s interest in lucrative arms sales to India at this time.

A secret Foreign Office briefing, of 22 June 1984, sent to Downing Street, stressed that British commercial interests in India were "very substantial, it is a large and growing market for both commercial and defence sales".

The document claimed: "British exports in 1983 exceeded £800m and since 1975 India has bought British defence equipment worth over £1.25bn."