United States Pacific Command (USPACOM) advised the Sri Lankan Defence Establishment to purchase Cluster Bomb Units (CBUs) during the peace talks mediated by Norway in 2002. The Island paper, which gives media space for PSYOP and information war waged by the SL military Establishment, on Monday released portions of an alleged FOUO-classified document of the US Defence Establishment. The ‘leak’ was made to remind the US Ambassador-at-Large for War Crimes Issues Stephen J. Rapp, that Colombo was having proofs of ‘US complicity’ in the genocidal onslaught it waged on Eezham Tamils, an informed journalist from South told TamilNet. Colombo’s Defence Secretary Gotabhaya Rajapaksa himself timed the ‘leak’, the journalist further said. 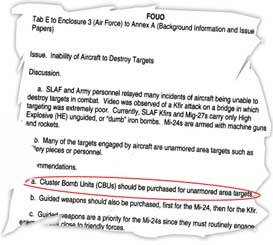 Mannaar Bishop Rt Rev Rayappu Joseph on 08 January briefed the US diplomat Stephen J Rapp, who recently visited the island on the alleged war crimes and the ongoing sturctural genocide.

The Bishop told the US envoy that the Sri Lankan military had deployed cluster bombs, air shots of aerial bombs and chemical munitions on civilian targets, causing heavy casualties in Vanni since October 2008. The Bishop’s statement was based on eyewitness accounts.

Mr Rapp, who uses to stage ‘sticking’ visits to the island each time ahead of USA composing its draft resolution on Sri Lanka to be placed at UNHRC session in Geneva, this time chose to exert his pressure on Colombo through a simple twitter message with a captioned photo featuring him at a church in Vanni, where hundreds of Tamil families were slain in SL military bombardment in January 2009.

The episode has caused tirades from SL ministers to Sinhala-Buddhist extremist monks, targeting both the Bishop of Mannaar and the US diplomat.

The extremist Bodu Bala Sena has came with veiled threats against the Bishops of Mannaar and Jaffna.

The Sinhala Archbishop of Colombo, His Eminence Cardinal Malcolm Ranjith, who has been defending the Sri Lankan State, has gone on record distancing himself from the statement of Bishops of Mannaar and Jaffna. He described the statements of Tamil Bishops as ‘controversial statements’ that were ‘based on their personal opinion.’

The Ambassador-at-Large for War Crimes is a State Department official, whose work is part of a carrot-and-stick battle waged by Washington. The Pentagon is the supreme authority on the strategic geopolitical affairs. The USPACOM is run by the Pentagon.

The SL Defence Establishment is having its military-to-military relationship with USPACOM.

“The US made the recommendation in the wake of the Oslo arranged Ceasefire Agreement (CFA) between the then Premier Ranil Wickremesinghe and LTTE leader Velupillai Prabhakaran. It was among a series of recommendations made to the Sri Lanka Army, Sri Lanka Navy and Sri Lanka Air Force to strengthen their capabilities during the CFA,” The Island’s Shamindra Ferdinando, said The Island in its news report titled ‘US asked SL to use cluster bombs against Tigers’, the news report by The Island said.

The journalist behind The Island story is known to have close links with the Sri Lankan Defence Secretary Gotabhaya Rajapaksa and SL President Mahinda Rajapaksa. He has also been used in an experiment to trap certain Tamil diaspora ‘artculators’ with the collaboration of some corrupt sections of the African National Congress (ANC) in South Africa.

Both, the SL President Mahinda Rajapaksa and Gotabhaya Rajapaksa have gone on record publicly stating that without Indian assistance, they couldn’t have won the war.

Both the Indian military and the US military have been attributed for sharing information to target LTTE’s vessels even during the CFA times.

The judges of Permanent Peoples Tribunal, in December 2013 found USA and UK complicit in the genocide against Eezham Tamils in the island. The judges were of the opinion that more evidence was needed on India’s role.