However flimsy it is, if the Northern Provincial Council (NPC) is a legislative body exercising the power of the people, it need not have any inhibition over calling a spade a spade, or qualms over presenting a case to the world with a nomenclature it decides as righteous. But, the NPC Chief Minister Mr C.V. Wigneswaran, a former justice, who was for long interpreting and ensuring the implementation of the laws enacted by the Colombo legislature of the genocidal State of Sri Lanka, confused court and the legislative powers of the NPC in diluting the word genocide into ‘equivalent to genocide’, in passing a crucial resolution on Monday calling for international investigations, commented Tamil activists for alternative politics in the island.

Further comments from the activists:

Wigneswaran managed to convince the Speaker and other members of the NPC, by arguing that genocide has to be ‘proved’ to use that term, so presenting the case for investigation should be worded as ‘equivalent to genocide’.

Wigneswaran’s argument not only blunts the spirit of legislature but also goes against the rights of prosecution even in judiciary.

The Chief Minister’s reluctance actually stems from the suppression and detraction of the term genocide, practised by the powers in complicity in the genocide that installed him to the position.

The denial is put in practice by the powers in complicity, because acceptance of the genocide in its international legal connotations would automatically justify the independence claim of the nation of Eezham Tamils. Then the whole purpose of the decades of genocide will be lost as far as Colombo is concerned. Those who are in complicity could always find other avenues to fulfil their aims, but they are yet to decide on that.

Wigneswaran’s “equivalent to genocide” modification has to be understood against the backdrop of the larger picture of deception.

Mr Wigneswaran cited Mr Sumanthiran in support of his arguments for the modification.

Earlier, the Tamil Nadu State Assembly passed a unanimous resolution on Eezham Tamils, worded as genocide. It was the right of the Assembly to pass a resolution like that.

Last week, the Permanent People’s Tribunal, after evaluating the evidences, came out with its published verdict indicting the Sri Lankan State for the genocide and continued genocide committed on Eelam Tamils. Besides, the verdict indicted the USA and the UK on the crime of complicity in the genocide. But the prosecution to the tribunal had placed the case as genocide case even at the beginnings of the hearing.

The prosecution at the UN level will be immensely powerful in its international validity and legality, if the NPC, elected by the affected Tamils, could place the genocide case as genocide case.

The voice recording of the proceedings and debate at the NPC on Monday, over the genocide wording, has to be carefully scrutinized by all Tamils, to keep vigilance on the subtle deceptions that are going to be orchestrated in the island and in the diaspora before the UNHRC session.

The ultimate aim is to allow more time and space to the Sri Lankan State to complete the demographic and structural genocide, before accepting anything. Accepting later, under new ground realities, need not accompany any justice. 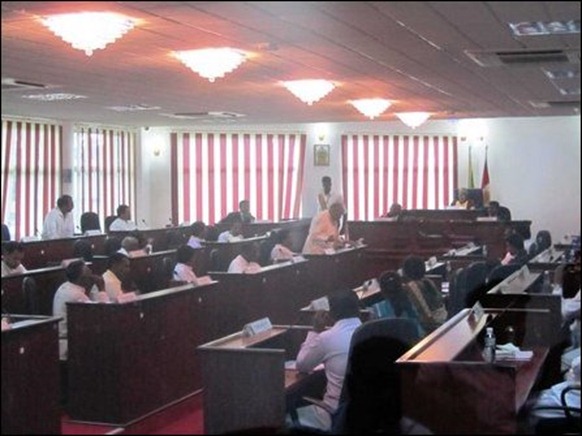