When Sinhala prisoners protested in Kandy, Namal Rajapaksa, the son of SL President went to the prison and ordered a report on the condition of prisoners. But, when Tamil political prisoners and prisoners of war, subjected to torture on a daily basis, stage protests, no one from the SL government cares about visiting them, said Sundaram Mahendran, the head of the Colombo based Committee on Missing Persons on Sunday when addressing the people protesting against the mysterious death of a Tamil prisoner Gopithas Visuvalingam, a British citizen who was imprisoned in Colombo since 2007. The protest was staged in the morning of the funeral day of the victim Gopithas, who is a father of two from the UK. 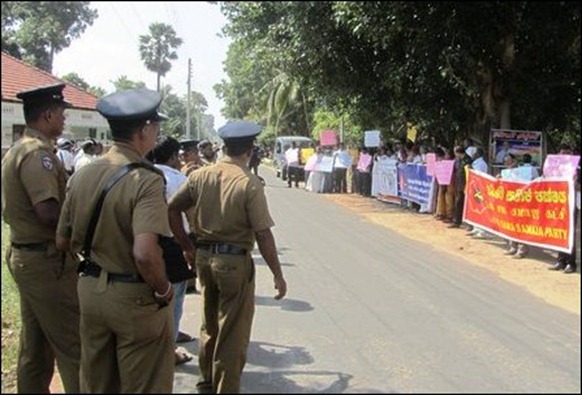 “We were repeatedly approaching the ministers and officials to convey the plight of the prisoners and the missing persons. No one was prepared to meet us,” Mr Sundaram said.

“Finally, Vasudeva Nanayakara, a cabinet minister gave appointment. He told us that the SL President Mahinda Rajapaksa would not be acting on the demand to release the Tamil political prisoners.”

He told the protesters that the only way forward to exert pressure is waging an international struggle.

The protest was staged for one hour near the funeral house of Gopithas Visuvalingam at Manthikai in Puloali. Families of missing persons from different parts of the peninsula attended the protest on Kodikaamam – Point Pedro Road.

All the politicians who addressed the protesters demanded international investigations on missing persons and urged the international community to exert pressure on Colombo to release the Tamil prisoners.

No credible post-mortem reports were produced in the case of Tami political prisoners who have been killed in the prisons. Between the reported cases of Dilruxon and Gopithas, there have been at least two reports of deaths. In all the cases, the Judicial Medical Officers cite the cause as natural death, but there have been reports of torture, Mr Sundaram said.

While the SL authorities say they have the post-mortem reports, they refuse to provide these to the families of the slain victims, he said.

S. Bhaskara of the Democratic Peoples Front (DPF) said that the British citizen Gopithas was a heart patient. But, he was only given with Panadol and Siddhalepa tablets in the prison.

Tamil prisoners are treated like animals in Sri Lankan prisons, he said.

“But, the so-called progressive Sinhalese and Bhikkus are fighting against the slaughter of cows for meat in the South,” Bhaskara observed.

TNA Councillor Ananthy Sasitharan, said the continued plight of Tamil prisoners and the missing persons and the mysterious deaths in the SL prisons should also be interpreted as the signs of continued genocide of Eezham Tamils. 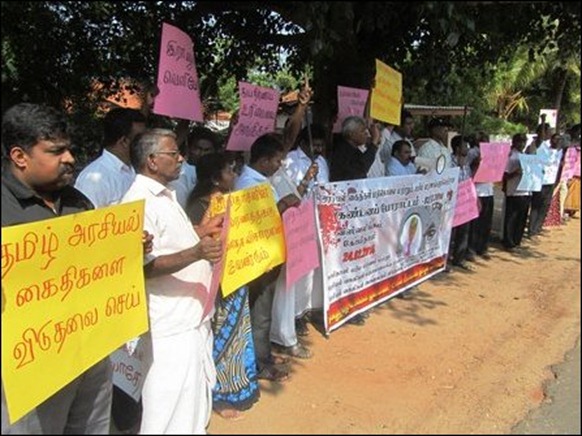