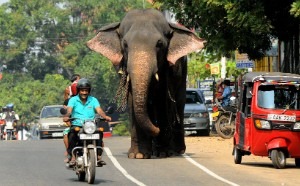 Sri Lanka’s deepening economic ties with China offer it a cushion from any measures aimed at pressuring the South Asian country into cooperating with investigations into alleged crimes during its civil war.

The case shows China’s increasing diplomatic impact abroad as it pursues influence and resources with investments across the globe, regardless of whether a country faces criticism for human-rights abuses. Chinese President Xi Jinping last year pledged financial aid in visits to South America and Africa shortly after taking office.

China has an "all-weather partnership" with Sri Lanka, it said in a statement last month during Peiris’s visit.

"We believe that people in Sri Lanka have the wisdom and capacity to manage their internal affairs, and oppose some countries’ interference in Sri Lanka’s domestic affairs under the pretext of the human rights issue," China Foreign Ministry spokeswoman Hua Chunying said on 12 February. "We oppose politicising and imposing double standards on the issue of human rights."

Since Sri Lanka’s three-decade war ended in 2009 with an offensive that the UN says killed as many as 40,000 civilians, China has overtaken the US as the island’s biggest trading partner.

China accounted for 9.6 per cent of Sri Lanka’s total trade in 2012, up from 5.2 per cent in 2008, a year before the conflict ended, according to the island’s central bank. The US contribution to the country’s trade dropped to 8.2 per cent from 9.7 per cent in that time.

Chinese government lending to Sri Lanka increased 50-fold over the past decade to 490 million dollars in 2012, according to Sri Lanka’s external resources department, compared with 211 million dollars combined from Western countries and lending agencies. Sri Lanka’s first four-lane expressway, second international airport and a port in the southern Hambantota city are among projects financed by the Export-Import Bank of China.

Sri Lankan President Mahinda Rajapaksa hailed the backing of China and Russia in a press briefing last week to denounce the UN proceedings.

"If any country wants to put sanctions, they can do it," he told reporters.

In a visit to Colombo on 1 February, State Department official Nisha Desai Biswal said the United States wasn’t considering sanctions "at this point." The European Union, Sri Lanka’s biggest export bloc, withdrew concessions on exports in 2010 because of the country’s human rights record,

Even so, the island’s 59-billion-dollar economy, roughly the size of Delaware, grew at least 7.2 per cent in 2013, compared with 6.4 per cent a year earlier, Central Bank of Sri Lanka Governor Ajith Nivard Cabraal said in January. Gross domestic product will expand 7.8 per cent in 2014, and average 8.3 per cent over the next three years, he said.

A UN panel in April 2011 accused Sri Lanka’s military and Tamil Tiger rebels of committing serious violations of international law in the final stages of the conflict. Sri Lanka denies the charges and says the calls for a probe amount to interference that will polarize the country.

"These initiatives disregard the substantial progress made by the government during the five years which have elapsed since the end of the 30-year war against terrorism," Peiris told the UN Thursday.