Noting that the Resolution tabled at the UNHRC Geneva meeting falls short in establishing a required accountability mechanism through a UN-controlled transitional administration that has the capacity to create an environment to gather evidence of what happened during the war, Gajendrakumar Ponnambalam, the president of the Tamil National People’s Front, said in a press meet held in Geneva on Friday that the weak mandate of the resolution will not only fail to bring about positive changes to Tamil people on the ground, but will also encourage the Sri Lankan government to continue to carry out the sort of actions that they have been carrying out.

"To call for an investigation to be conducted by the High Commissioner’s office, in our view, falls well short of the sort of accountability mechanisms that are required," Gajendrakumar said, adding that the resolution addresses not Tamil or ethnic conflict but problems faced by "religious minorities." 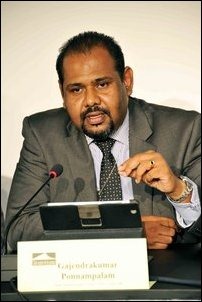 My name is Gajendrakumar Ponnambalam. I am the president of the Tamil National People’s Front, which is a Tamil political party based in the Tamil homeland in Sri Lanka. I am also a former member of parliament for 8 years right up to 2010.

The purpose of my intervention will be to restrict my comments purely to what is happening on the ground at the moment and what our expectations are with regards to processes that should take place in places like the UN Human Rights Council.

That is the only criteria by which, as far as the Tamil people are concerned, we should judge whether any particular act that is being done on our behalf, is a positive step or whether it is a negative step, or quiet simply whether it is irrelevant to us.

As far as what is happening on the ground I think Prof. Sri Ranjan went into great detail with regards to the history.

If we take immediate past, if we look at what happened during the war, I think we all know the sort of horrendous crimes that have taken in place.

We, as people who lived in the land and who actually faced it and who are witnesses to actually what has happened take the very firm position that this goes beyond war crimes and crimes against humanity and that it is a systematic genocide that took place and is on-going.

When we use the term genocide, I am not talking about purely the loss of life. That happened. During the war, there were several incidents of genocide that we believe can be proved. Some of us here are witnesses to that. I am personally a witness to that.

But, we also believe that when we use the term genocide, it is not merely the loss of lives, but also the very systematic dismantling of the Tamils as a nation. It is that identity of a nation that is being systematically dismantled. The loss of life is just one aspect of that nationhood that is being dismantled.

What do we mean by this nationhood? What are the criteria that are relevant to qualify for nationhood?

That is the cornerstone of the peoples right to self-determination. That certain people qualify for their ability to be able to govern themselves, to have the ability to exercise sovereignty.

As far as the Sinhalese nation is concerned, the fact that the Tamils exist in the island of Sri Lanka with these relevant criteria that make us qualify for nationhood, is a problem for their own ideology.

It sees the existence of the Tamils that can qualify for nationhood, and therefore self-rule, as a threat to that very identity of Sri Lanka being a Sinhala Buddhist country.

Each of those pillars that make us qualify for nationhood is being undermined and destroyed. That is what is happening right now.

Just because the war has stopped five years ago, and the tremendous loss of life has greatly reduced, that does not mean that the conflict has stopped. It is actually on-going.

If you actually look at what is happening in Sri Lanka at the moment, land grab is at the phase.

From a perspective coming from the ground, firstly we expect that at the UN, there must be a call for an independent international investigation at the very minimum that not only look into war crimes and crimes against humanity but also genocide. We are asking for an investigation of these crimes.

I don’t think there should be any problem with regards to investigating these crimes. The only way that we can actually find out as to what actually happened is to be prepared and go in and actually understand what really took place.

The fact that if we are going to start restricting, even with regards the sort of investigation that must take place, then I think there something radically wrong.

An international independent investigation that looks into the crimes of war crimes, crimes against humanity and genocide is fundamental. The second aspect is with regards to how are we going to get that evidence out.

Today, as far as the Tamil people are concerned, there is no safe environment for people to actually come out and talk.

There are few individuals, like may be us in this podium and who attend the Human Rights Council, who are prepared to take their risks. But, the reality is that the evidence vests in the people and it is in that soil. If you want to get to the truth, you have to create an environment that is safe for that evidence to be gathered. We believe that it can only happen through a formation of a transitional administration that is essentially taken control of by the UN or any other international body that has the capacity to provide that sort of protection.

If that does not happen, you are not going to be able to get that evidence out.

So, if we are talking about the accountability, the environment in order to get the evidence out is crucial.

When that is actually the expectations on the ground, there is a resolution that is being tabled in the UN Human Rights Council, as we speak.

That resolution, very unfortunately, does not address these issues.

If we look at the way in which that resolution is actually addressing the conflict, the word ‘Tamil’, as Prof Sri Ranjan has already mentioned, is not even mentioned.

Secondly, when we have always recognized, and I don’t think there is anyone anywhere that will say that war crimes, crimes against humanity did not take place. That is the sort of offences that has to be looked at. This resolution does not talk of any of that.

This resolution talks about human rights violations and related crimes. There is a big difference.

Thirdly, once again this resolution gives a tremendous importance to the government itself to investigate itself.

To call for an investigation to be conducted by the High Commissioner’s office, in our view, falls well short of the sort of accountability mechanisms that are required.

So, the worry here is that as the resolution stands in its current draft, the real concern that we have, is that we are going to have another year and another report, as supposed to actually having genuine movement on the ground that will have a positive impact and that will prevent it in some way that deter Sri Lankan government from carrying out the sort of actions that they have been carrying out.

We are also fully aware that the Council has severe limitations. That is why we say that it has to go beyond. There has to be a will that is created to go beyond.

There is no question with regards to the fact that we want a resolution being passed.

The issue is with regards to the mandate that is going to be given with that resolution.

If that mandate, as its stands, is going to be what it eventually passes on whatever date that passes, we believe that it is so weak, that it will embolden the current regime to carry on with its actions. It will create a sense of impunity that is so great that people like us, will not even be allowed to come here the next year.

The urgency is there. I say this with utmost responsibility at the rate at which the identity of the Tamil nation is being dismantled. If we continue with this rate, for the next two to three years, there is absolutely no point for us in coming back here, that is the sense of urgency that which we want to see changes been made.

We believe that the time has not passed. There is still a few days that we can use to strengthen this resolution to a point quite actually is relevant and that actually can make a difference. If that does not happen, then all this resolution is going to do, is embolden a government that is already on the rampage, and it is going to weaken to an unbelievable level the capacity of the Tamil people to resist.

Thank you very much.