The occupying Sri Lankan military, launching house-to-house search in the North and East has targeted former LTTE members, has detained at least 28 Tamils within the last two weeks. The Sinhala military, unfolding a concocted scene of regrouping of the LTTE, initially ‘abducted’ two persons in Pazhai on charges of distributing leaflets and later arrested a mother and daughter on 13th March in Tharumapuram in Ki’linochchi. Several arbitrary ‘arrests’ have been made since then. While pro-Sri Lankan groups were projecting so-called ‘LTTE terrorism’ as the key issue in Geneva as a smokescreen to deviate the global focus, the SL military intelligence operatives have been deployed in an unprecedented terror operation after 2009, as a tactic to support their ‘Geneva strategy’, Tamil rights activists in Ki’linochchi said.

Sri Lankan military intelligence operatives, appearing as ‘Terorrist Investigation Division’ initially ‘abducted’ two persons in Pazhai earlier this month on allegations that they were in possession of ‘leaflets’.

Former LTTE members, who are already subjected to various harassments, are facing an unprecedented campaign of terror as the SL military has summoned them to their camps and divisional secretariats issuing threats of white van abductions and disappearances if they were identified as associating themselves with the ‘regrouping LTTE’.

To intensify the operation, a gunfire incident was staged, targeting the activist Jeyakumari, who was voicing for her missing son when Human Rights High Commissioner and British Prime Minister visited the island.

On Tuesday 12 Tamils from Jaffna, staying in Dehiwale in Colombo, were arrested by the notorious TID operatives, according to a complaint lodged with the SL Human Rights Commission office in Jaffna.

Two of the 12 detained were taken to the 4th floor in the TID headquarters and the others are remanded at Boosa.

In the meantime, a 28-year-old man from Vanni, Thurairasa Amuthakaran, working at Kommaanthu’rai in Uduppiddi in Uduppiddi has been summoned to TID interrogation office in Jaffna on Wednesday.

In Thenmaraadchi, the SL military is harassing Tamil businessmen, who have given employment opportunities to former LTTE members.

On Tuesday, former LTTE members were summoned to military camps and divisional secretariat offices where they were warned by the SL military officers.

In the meantime, sources in Vavuniyaa said that the 13-year-old Vibooshika is still being regarded still regarded as a “Terrorist” suspect in the records by the Terrorist Investigation Department, which maintains that she should be investigated.

In the meantime, a letter written by Vibooshika in Tamil has been sent to journalists by NGO activists in Vavuniyaa.

The letter in her own handwriting is produced below: 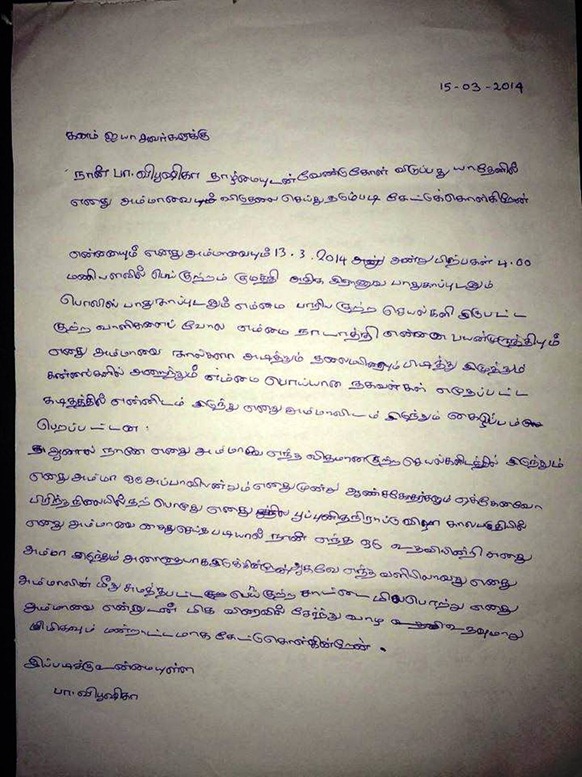 Open appeal by Vipooshika, dated 15 March 2014, urging help to help her mother freed from the detention by the Sri Lankan ‘Terrorisist Investigation Division’