The Northern Provincial Council Chief Minister C. V. Wigneswaran’s official letterhead, bearing his address, notes the place name Chu’ndikkuzhi as Chu’ndukku’li. In the Sinhala rendering it has become Chundukuli. A large number of Tamil place names have already been Sinhalicised or mutilated by the signboards placed by the occupying genocidal military in the country of Eezham Tamils and now Wigneswaran is also contributing to the trend, commented Tamil academic circles in Jaffna. There was a time when Jaffna enjoyed reputation even in Tamil Nadu for flawless use of Tamil.

The place name Chu’ndik-kuzhi has come from a pond that existed there and was found with the aquatic plant Chu’ndi. It is a floating sensitive plant, which is also called Neerch-chu’ndi or Chu’ndik-keerai (Water Mimosa). The plant got the name because of its sensitive attribute.

Another corresponding place name in Vadamaraadchi East of Jaffna Peninsula is Chu’ndik-ku’lam, meaning the tank found with Chu’ndi.

Kuzhi, meaning a small pond or waterhole is written with the retroflex L, unique to Dravidian.

The mutilated forms, Chu’ndukku’li in Tamil and Chundukuli in Sinhala found in the Tamil chief minister’s letterhead, are of no meaning. 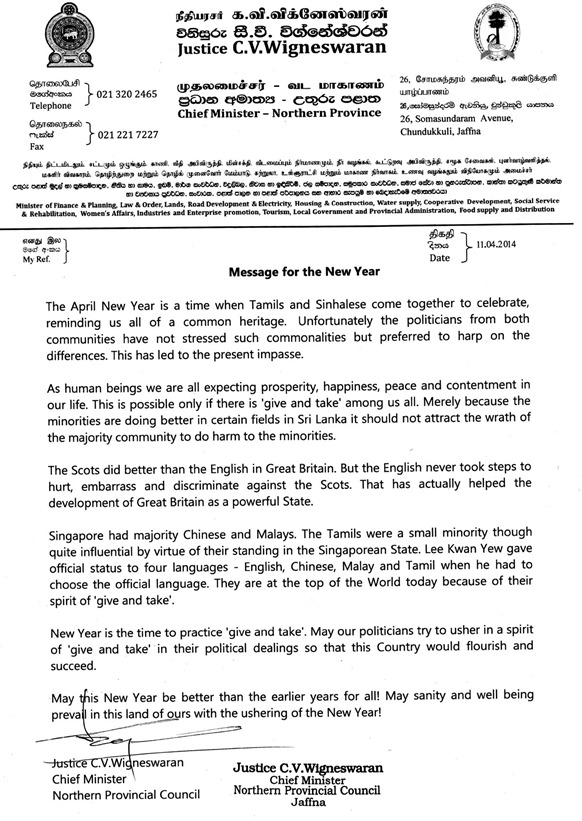 Wigneswaran was politically weakening the cause of Tamil nation by using the term ‘minorities’.

“Merely because the minorities are doing better in certain fields in Sri Lanka it should not attract the wrath of the majority community to do harm to the minorities,” the chief minister who admits that he had been politically ‘installed’ said.

In every vital facet, the nation of Eezham Tamils in the North and East was facing deterioration right from British colonial times. Under the Sinhala State, they faced genocide and now they face on-going structural genocide.

While placing the case of Eezham Tamils in its proper perspective to the world is the utmost priority of the affected nation, the CM installed at that position was perhaps thinking of the ‘minority’ of his genre in Colombo, commented Tamil activists for alternative politics in the island.

To camouflage the congenitally genocidal orientation of the Sinhala State, various sections in the island and outside have deliberately been highlighting a myth that Tamils were doing better under the British and they were doing better in independent Ceylon, and that’s why the Sinhalese wanted to balance the situation. Even Colombo’s former President Chandrika was talking in that line a couple of years back. Now it comes from Wigneswaran.

Wigneswaran was also talking of the examples of the Scots and the peoples of Singapore (under unitary systems), but none of them in their heart would agree with Wigneswaran.

What ‘give and take’ Wigneswaran was envisaging with an occupying, genocidal State, has to be verified by the people who were compelled to vote for his installation, commented the Tamil activists.

Another feature noticed in the letterhead is the installed politician’s continued use of the title ‘Justice,’ when the State’s judiciary itself is internationally questioned. Is it for a mean political image or is it in the lines of a political culture of the genocidal State where the occupying governors appear with military titles, the activists asked.