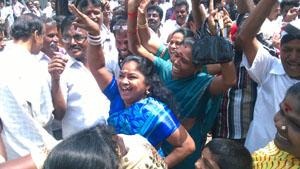 Counting of votes began in 39 Lok Sabha constituencies and the lone parliamentary seat in Puducherry at 8am on Friday along with other constituencies across the country. Counting is on Alandur assembly segment which went for a bypoll on April 24.

Here we bring you live updates from counting centres across the state and Puducherry.

8: 10 pm: Maragatham Kumaravel of the AIADMK won by a margin of 1.46 lakh votes in Kancheepuram. Her nearest rival, G Selvam, polled 3.5 lakh votes.

8: 05 pm: Tamil Nadu chief minister J Jayalalithaa said she was overwhelmed by the historic verdict for the party on Friday, which happened to be her present government’s third anniversary. "It is a double delight for me," she said in an official statement.

5:30 pm: Former Union minister Dayanidhi Maran of the DMK is trailing by over 40,000 votes to S R Vijayakumar of the AIADMK.

4:30 pm: AIADMK candidate V N P Venkatraman was leading in the by-election to the Alandur assembly constituency on Friday. The contest in the seat was mainly between Venkatraman and DMK’s R S Bharathi, who was a four-time chairman of the Alandur municipality. At the end of the 7th round, Venkatraman got 26,207 votes while Bharathi secured 20,260 votes. The by-poll was necessitated by the resignation of DMDK MLA Panrutty S Ramachandran, who later joined the AIADMK.

4:10 pm: PMK leader S Ramadoss greeted the NDA on its victory in the Lok Sabha elections. "You are the architect of this victory that has secured majority for a political party after a gap of three decades (in the country)," Ramadoss said in a communique to BJP leader Rajnath Singh.

4:00 pm: DMK president M Karunanidhi accepted the party’s defeat with ‘bowed head.’ "DMK has seen defeats like this and massive victories than any other parties," he said. Recalling DMK founder and former chief minister Annadurai’s advice that "not go crazy on victories or get bogged down by losses," the DMK leader said the party would continue to work to win people’s confidence. Karunanidhi extended wishes to BJP for having registered a landslide victory in the country, especially its PM nominee Narendra Modi.

3: 40: pm: MDMK leader Vaiko congratulated Narendra Modi on the party’s landslide victory in the general elections. "As Modi wave was sweeping in most of the constituencies, people have voted for NDA alliance for a massive victory, and for the BJP to get a majority on its own," he said.

3:05 pm: Former Union minister R Raja lost the Lok Sabha elections to C Gopalakrishnan of the AIADMK in the Nilgiris constituency in Tamil Nadu. C Gopalakrishnan swept the poll with a huge margin of 1,04,940 votes which is at least 20,000 more than what Raja got in the 2009 elections. While Raja, an accused in the 2G scam, polled 3,58,760 votes, Gopalakrishnan got 4,63,700 votes.

2: 45 pm: With 90 percent of counting over, AIADMK candidate C Gopalakrishnan is leading in the Nilgiris constituency. DMK’s A Raja is lagging behind with about 91315 votes.

1: 05 pm: Tamil Nadu chief minister J Jayalalithaa thanked the people in state for the party’s massive vistory in the Lok Sabha elections. "I would like to thank my beloved people of Tamil Nadu for its massive victory which they have given to the AIADMK. This is a historic, unparallelled and unprecedented victory. The AIADMK has achieved this victory on its own without any partners in an alliance with it. At this point of time, I would like to thank who have worked hard and sincerely for the victory of our party candidates. I also wish to thank the people of Tamil Nadu for having bestowed on the AIADMK the distinction of emerging as the third largest party in Parliament in the country."

‘Where did all votes we cast go,’ ask dejected DMK men

12:45 pm: PMK’s Anbumani Ramadoss is leading by a margin of 32,020 votes in the Dharmapuri constituency over his nearest rival P S Mohan of the AIADMK at 12.39pm.

12:40 pm: PMK’s Anbumani Ramadoss is leading by a margin of 32,020 votes in the Dharmapuri constituency over his nearest rival P S Mohan of the AIADMK at 12.39pm.

"We have the heart to bear anything," says 92-year-old DMK leader K Anbazhagan on party’s debacle in the 2014 Lok Sabha elections.

11:58 am: Congress MLA and senior leader S Vijayadharani said the results reflected the need for change of government at the Centre. "The brute majority may hold good for BJP, but not for people," she said.

11:45 am: The Tamil Nadu unit of BJP begins celebrations with band music and dance as the party leads in 257 seats across the country.

11:40 am: Over 6,000 NOTA votes polled in Central Chennai. DMK candidate and former Union minister Dayanidhi Maran in the fray.

11: 10 am: After second round of counting, AIADMK’s Anwar Rajah secured the margin of 8,585 votes in Ramanathapuram Lok Sabha constituency. Rajah secured 26,897 votes against DMK’s Mohammed Jaleel who is trailing second with 18,312 votes. BJP’s Kuppuramu was in third place with 9972 votes while Congress candidate, S Thirunavukkarasu secured 6,638 votes.

11: 05 am: AIADMK candidate R Parthiban secured 28, 614 votes in the first round and leading in the constituency after the first round. He is ahead of DMK candidate Pon Muthuramalingam by 16, 869 votes. Pon Muthuramalingam secured 11745 votes. MDMK state propaganda secretary K Azhagu Sundaram is in third position with 6,239 votes and Congress candidate and sitting MP J M Aaron Rashid secured just 2,770 votes. NOTA received 395 votes.

11: 02 am: DMK agents started leaving from many counting centres in Tamil Nadu after the party’s poor show in the elections.

11:00am: AIADMK has secured clear margin in Tirunelveli Parliamentary constituency with the party candidate K R P Prabakaran securing 65,732 votes after third round of counting. DMK’s Devadasa Sundaram trails in second place with 40,246 votes while DMDK’s S Sivananenthaperumal is in third place with 17903 votes. Congress is in fourth place with 10,819 votes. After second round, Prabakaran was at 47405 votes while DMK candidate has secured 26,976 votes.

10:52 am: After two rounds of counting, AIDMK’s Jeyasingh Thiyagaraj Natterjee leads in Tuticorin with 5,2521 votes while DMK’s Jegan P trails with 37,323 votes and MDMK’s S Joel is at third place with 23,804 votes.

10:49 am: After the first round of results in Dindigul constituency, AIADMK candidate M Udayakumar is leading by 7,875 votes. AIADMK secured a total of 27, 758 votes as of now, while DMK candidate and former deputy speaker S Gandhirajan has secured 19, 883. DMDK candidate A Krishnamoorthy and Congress’s NSV Chittan are in third and fourth places respectively.

10:46 am: DMK leader T R Baalu trails behind K Parasuraman of AIADMK by 3,862 votes in Thanjavur.

10:38 am: Buoyant AIADMK cadres burst crackers near the residence of chief minister J Jayalalithaa in Poes Garden and party headquarters.

10: 35 am: AIADMK leads in 21 out of 39 constituencies. VCK leader Thol Thirumavalavan leads in Chidambaram.

10: 30 am: As many as 883 people opted for NOTA in Madurai constituency where AIADMK has registered a strong lead with 28339 votes followed by DMK that has polled 15263 votes.

10:20 am: The crowd is swelling in Poes Garden (the residence of chief minister J Jayalalithaa), and security personnel find it hard to manage the scene. Buoyant AIADMK men and women thronged the roads leading to Jayalalithaa’s residence with sweets. Several of them holding aloft AIADMK flags and plastic leaves rejoicing the party’s victory in the initial rounds of counting. Some painted two leaves on their bodies with heads shaved like a two leaves.

10: 18 am: Media personnel protested against officials at the counting centre at the Government College of Technology in Lok Sabha constituency in Coimbatore. Media personnel alleged that they were not being allowed inside the centre.

10:10 am: In Tenkasi constituency, ADMK’s Vasanthi Murugesan has secured 2,7208 votes after the first round while Puthia Tamilagam’s K Krishnasamy is trailing second with 15934 votes. MDMK’s Sadhan Tirumalaikumar is trailing third with 10261 votes and Congress and CPI securing fourth and fifth places.

10: 00 am: MDMK leader Vaiko is lagging behind AIADMK candidate Radhakrishnan in Virudhunagar constituency.

9:45 pm: G Hari of the AIADMK is leading by a margin of 2,265 votes in Arakkonam constituency over his rival N R Elango of the DMK.

9:40 am: K R P Prabhakaran of the AIADMK is leading over Devadasa Sundaram of the DMK by a margin of 3,426 votes in Tirunelveli.

9:35 am: A C Shanmugam of the BJP is leading B Senguttuvan of the AIADMK by a margin of 273 votes at the end of postal ballot counting in the Vellore constituency in Tamil Nadu.

9:30 am: In the Nilgiris, the 2G-tainted A Raja trails by 7,562 votes behind AIADMK candidate C Gopalakrishnan in the first round.

9: 25 am: In Tirunelveli, Prabakaran K R P of AIADMK leading Devadasa Sundaram of DMK by 1,473

9:15 am: In Nilgiri constituency formwer minister A Raja, accused in 2G scam, is trailing trails by 4,000 to AIADMK’s C Gopalakirishnan.

9: 05 am: The AIADMK is leading in 13 seats and Congress and BJP are leading in one seat each.

8:45 am: Union minister of state for PMO and Congress candidate V Narayanasamy is leading by 1,950 votes in Puducherry parliamentary constituency. He has polled 4,114 votes as against his nearest rival All India NR Congress candidate R R Radhakrishnan who polled 2,164 votes. So far over 8,329 votes have been counted.

8:00 am: Counting begins. Postal ballots were taken up for counting at first. EVMs would be opened after the completion counting of postal ballots