In a series of protests that happened across the globe, Tamils demonstrated their solidarity with the nations of Kurdistan and Palestine. Condemning the Islamist ISIS’ brutality and ethnic cleansing against the Kurds in the Kurdish territories of Syria and Iraq and Israel’s unrelenting assault on Palestine, Tamil activists conveyed their support for independent Kurdistan and Palestine. Over the past few weeks, protests for these causes in Chennai, London, Washington, Los Angeles, Sydney, Toronto and other places saw active Tamil participation. Over 2000 activists of different organizations staged a protest in Chennai on Friday for Kurdistan and Palestine. Likewise, Tamil activists who attended a Kurdish demonstration in London on Friday highlighted the need for greater solidarity among Nations-Without-States. 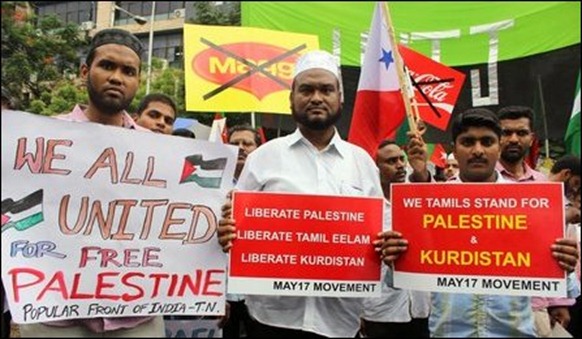 Hundreds of Kurds gathered at Downing Street, London to condemn the Islamic State of Iraq and Syria’s (ISIS) atrocities against Kurds and other groups. Stating that the ISIS campaign against the Yezidis was with genocidal intent, they criticized the world powers and media houses for turning a blind eye to these crimes.

While the Tamil activists joined the Kurds in raising slogans condemning the ISIS brutalities, the Kurdish protestors also raised slogans of “Tamil Tigers are freedom fighters.”

Speaking at the demonstration, Karthick RM, a research scholar in Political Theory at the University of Essex in UK, said that the silence and complicity of the International Community that facilitated the genocidal onslaught on the Eezham Tamils in May 2009 was being repeated with regards to the Kurds.

Condemning the world powers for their calculated silence, he also said that as struggling peoples of Nations-Without-States, there should be greater solidarity between the Tamils and Kurds.

In Chennai, over 2000 activists of more than 20 political organizations, movements and civil society groups demonstrated at Paris corner on Friday for Kurdistan and Palestine.

Earlier on 02 August, more than 20,000 people marched towards the white house in solidarity with the Palestinians. May 17 Movement represented Tamils and took part in the rally.

Speaking to TamilNet from Los Angeles, Rathish Kumar, activist with the May 17 Movement, condemning the US, UN and human rights NGOs for their bias against the Tamil Eelam struggle and the Palestinian struggle, said “As someone who understands the pain and struggle that Palestine and Kurdistan are going through, May 17 Movement stands in solidarity with their struggle for their right of self determination and strongly condemn the imperialist nations and UN for their complicity in genocide.”