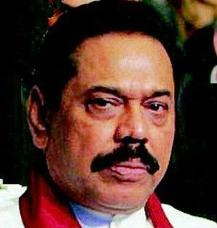 "We will not allow them into the country," said Rajapakse, who is under international pressure to cooperate with the UN-mandated investigation.

Sri Lanka has refused to accept the authority of the UN Human Rights Council which voted in March to probe allegations that the military killed 40,000 civilians in the final months of the separatist war, which ended in 2009.

But it is the first time that Rajapakse has said UN investigators will not be allowed into the country, effectively barring them from face-to-face access to Sri Lankans wanting to testify in the probe.

Rajapakse said however that his government was cooperating with all other UN agencies.

"We are saying that we do not accept it (the probe). We are against it," he told Colombo-based foreign correspondents at his official residence.

"But when it comes to other UN agencies, we are always ready to fully cooperate and fully engage with them," he said.

UN secretary general Ban Ki-moon and other leaders have urged Colombo to cooperate with the UNHRC after ending a prolonged separatist war that pitted ethnic minority Tamil rebels and the largely Sinhalese army in a drawn out ethnic war.

Outgoing UN rights chief Navi Pillay earlier this month suggested that her investigators looking into allegations of mass killings may not have to travel to Sri Lanka at all.

She said there was a "wealth of information" outside the country. Her remarks prompted allegations from Sri Lanka’s foreign ministry that her probe was on a "preconceived trajectory" and that her "prejudice and lack of objectivity" were unfortunate.

Colombo insists that its troops did not commit war crimes while crushing the Tamil Tiger rebel movement at the end of a conflict which stretched for more than three decades and claimed more than 100,000 lives.